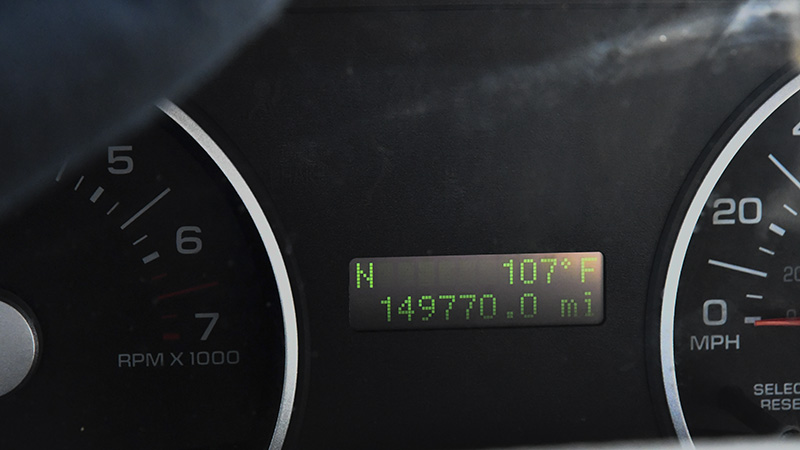 Temperatures inside a vehicle can rise quickly when the engine is off, especially when the outside temperature is close to or more than 100 degrees. Photo by David Thornton

As the heat begins to roll through Pearl River County, it’s imperative to remember to not leave children in a car unattended, even if it might seem like a short period of time. Leaving a child, or pet for that matter, in a hot vehicle could result in the child or pet dying of heatstroke.

Mississippi is in an area of the country where heat stroke can affect the population, especially in the summer

According to the Centers for Disease Control, there are ways to treat someone who is is suffering from heat stroke. In a heat stroke situation CDC says to move the victim to a shady area or indoors and focus on cooling the body until medical attention arrives. Some options are to place the person in a cool bath or shower, spaying them with a garden hose, using a damp sponge with cool water and fanning them. Continue this until help arrives or the person’s body temperature reaches 102F and stays there.

Picayune Police Department Assistant Chief James Bolton and Poplarville Fire Chief Jason Bannister provided tips to prevent heat stroke. While neither of these emergency responders said their department has had to work a case of a child dying of heat stroke in the recent past, they did say these cases do occur occasionally.

“It’s definitely a problem and something we definitely need to address,” Bolton said.

Bannister said he has fortunately never had to work a heat stroke case that involved a fatality in his career, but once or twice a year they respond to an child who was accidently locked in a vehicle who was unharmed after being removed from the vehicle.

While Bolton said he can not recall a recent incident of a child dying in a hot car within Picayune, officers with the department have received numerous calls over the years in reference to juveniles being locked in a vehicle. However, according to previous coverage, there have been cases where pets died after being left in a hot vehicle within Picayune.

Bolton and Bannister want to remind the pubic that a vehicle can become lethally hot in a matter of minutes.

“It takes just a few minutes, within 5-8 minutes the heat can rise in the car to the point of 120F, or higher depending on the outside weather. If it’s 100 plus outside, which it has been lately, it can be as high as 130 inside that car within just a few minutes,” said Bolton.

Bannister said on a hot summer day a car can become overheated and therefore unsafe in less than five minutes after turning off the car.

In those conditions humans and pets can suffer from heat stroke or heat exhaustion. Heatstroke is the most serious heat-related illness. It occurs when the body can no longer control its temperature because the body’s temperature raises rapidly, the sweating mechanisms fail and the body is unable to cool down.

The best form of action is prevention, such as taking precautions to ensure the driver of the vehicle remembers the child in the back seat.

“But most of all I understand fatigue sets in but be more aware of your surroundings. If you have a child in the back seat and you have a very forgetful memory, tie a string to yourself and attach it to the car seat so that way it reminds you when getting out of that car you still got that child back there,” said Bolton.

Some other prevention measures include placing the child seat in view of the rear view mirror and making it a habit to check the back seat before getting out of the vehicle.

“Because everybody develops muscle memory, if you look in your back seat every time you get out, for a certain period of time, it’s going to become muscle memory and you’re going to do it without even noticing that you’re doing it. So just get into the practice of clearing your car, especially if you have children,” said Bannister.

According to the CDC, signs of heat stroke include a body temperature above 103°F, the presence of red, hot, and dry skin that is not sweating, having a rapid, strong pulse, complaints of a throbbing headache, dizziness, upset stomach, passing out and confusion.

If a passerby notices a child or pet locked in a hot car, emergency responders urge them to act fast.

Bannister said he’d break the window and get the child out of the car after calling 911. Bystanders will also want to look for a parent nearby to alert.

Bolton suggests bystanders call 911 immediately if they see a child in any kind distress and to be prepared to give the dispatcher the location of the car, its color, make, and model and tag number if possible.