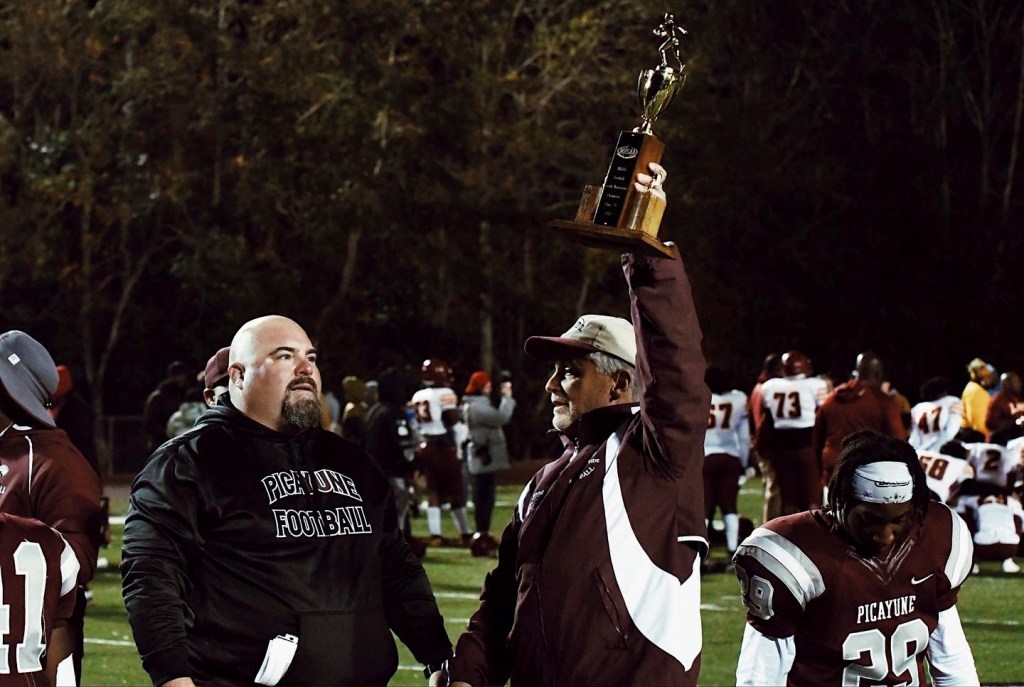 Picayune Head Football Coach Cody Stogner is presented with the district trophy after the Maroon Tide beat the Laurel High School's team in the final four game during the team's 2021-22 5A state championship run.

Here is a taste of what’s to come for the 2022-2023 high school football season in Pearl River County.

The reining 5A state champs look to repeat last year’s winning season, the Poplarville Hornets look to bounce back from their final four loss against Columbia and the Pearl River Central Blue Devils look to be much more successful this season.

For the Picayune Maroon Tide, their home games include, Sept. 9 and 16 against Gulfport and D’Iberville, Oct. 7, 14 and 21 against East Central, West Harrison and George County respectively then a regular season closer against Gautier on Nov 4.

Away games include a season opener against county rival Poplarville Hornets on Aug. 26. Then they will play Jefferson County on Sept. 2. On Sept. 23 the Maroon Tide will face county rival the Pearl River Central Blue Devils and on Sept. 30 will be a matchup against Vancleave. The last away game of the regular season for the Maroon Tide will be against Long Beach on Oct. 28.

As reining defending 5A State Champions, every game is important to Head Coach Cody Stogner.

“They are all circled because they all count in my opinion, we got a target on our backs, so we are going to have to bring it every week,” said Stogner.

The off-season workouts during the summer have been going well for the Maroon Tide. Stogner said he has seen good turnouts and the players have been pushing themselves to get better.

Head Coach Jay Beech says the summer workouts have been good but could be better. When asked if that raises any concerns, Beech said, “It does, as a coach you always think it could be better. Ninety percent of the team is working their tails off but there are some who could work harder.”

He said the ones not working hard enough will miss out on an opportunity to get better, but he knows those lumps happen every year and every team is trying to manage.

Beech would rather have 90 percent of his players working their tails off with the10 percent just a step behind than those numbers be the other way around.

As Stogner said, the Maroon Tide has targets on their back, and as such Beech and the Poplarville Hornets are one of those many teams aiming at Picayune. Beech said the game against Picayune is the only one circled on his calendar, for now. Columbia, who Poplarville lost to in the final four of the 4A state playoff, is another matchup to keep an eye on. Poplarville will face Columbia on Oct. 21.

For the Pearl River Central Blue Devils, their home game schedule includes season a opener against Hancock on Aug. 26, a rival game against the Picayune Maroon Tide on Sept. 23, Long Beach on homecoming night on Oct. 7, and senior night on Oct. 21 against Vancleave.

Away games include a county rival matchup with the Poplarville Hornets on Sept. 2, Sumrall on Sept. 16, East Central on Sept. 30, George County on Oct. 14, Gautier on Oct. 28 and a regular season closer at West Harrison on Nov. 4.

The game circled on Head Coach Jacob Owen’s calendar is game is the season opener against Hancock.