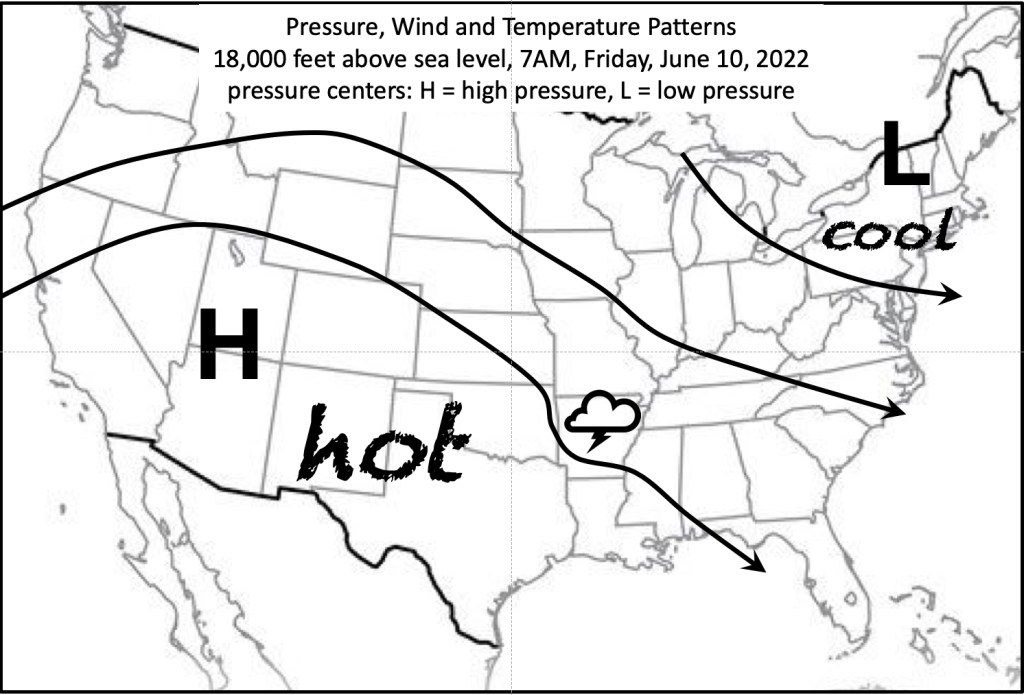 It was hot in Texas this week, even for Texas. Many locations in central and south Texas have climbed above 100 degrees every day since last Saturday. Daily record highs were tied or broken on several days. Del Rio, which is a two hour drive west of San Antonio, set a new record for June 6th of 110 degrees, breaking the previous record of 109 set in 1916.

The Texas heat wave has been kept in place by high pressure several miles above the southwestern United States. South Mississippi was on the eastern edge of the big ridge of high pressure, and that was close enough to allow temperatures to climb into the 92 to 95 degree range in most locations in Pearl River County on several afternoons this past week.

Looking at colorized satellite imagery the viewer can get the impression of a “ring of fire” surrounding the dry, calm, high pressure center as thunderstorms form along its edges.

Thursday night, thunderstorms formed in Oklahoma and Kansas. As I write this on Friday morning, they have consolidated into an MCS in Arkansas. The flow between the mid-level high pressure centered over Utah and the mid-level low pressure in the northeastern United States was pushing the MCS towards Mississippi.

By the time you read this, you will know whether the thunderstorms of the MCS held together and walloped Pearl River County on Friday afternoon, or whether the heaviest weather skirted to our west or east. MCS thunderstorms can produce strong winds, which is why as of Friday morning the National Weather Service said that it would likely issue one or more severe thunderstorm watches in Mississippi for Friday.