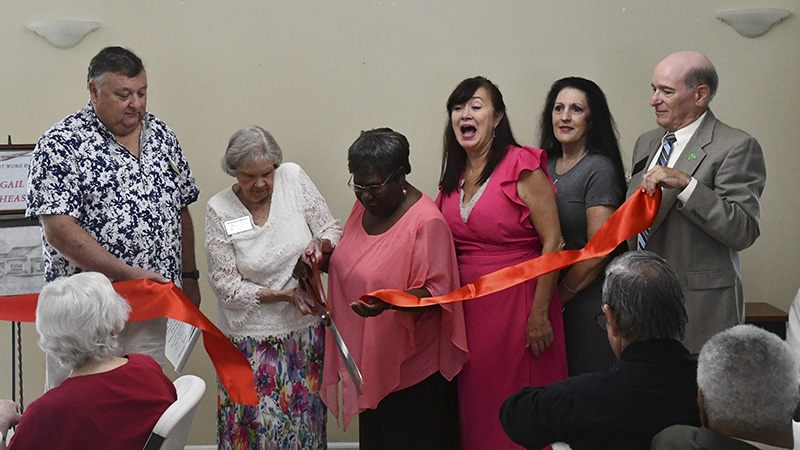 On Saturday, June 11 the Senior Center of South Pearl River County celebrated 20 years of being under one roof.

Staff and visitors of the center attended an open house event along with current and former Board members.

The celebration was recorded by Phil Edwards, who recorded the grand opening of the facility 20 years ago. On display were some of the arts and crafts made by the senior citizens who participate in the center’s various programs, such as paintings and wood carvings. There was also a line dancing performance.

Executive Director David Sykes opened the event by introducing the guest speakers, who provided some history about the facility and the Senior Center’s founding.

Sykes also raised the question about what could be done to honor the people who had the vision establish a senior center in Picayune.

“The greatest thing we can do to honor them is to ensure that this place is going to be here for at least the next 20 years. So that became our goal,” Sykes said.

On June of 2002 a grant from the Lower Pearl River Valley Foundation allowed the founding members to build the current building. Since the facility was first constructed, several additions and renovations were have been made to the building, including a brand new roof, new paint job, new walking track and replaced the HVAC system units just in time for summer. There have also been new automatic doors, extra handicap parking, another kitchen, and an annex constructed for the arts and crafts classroom.

“There’s no reason this building can’t be here for another 20 years,” said Sykes.

Juanita Gex, who is a former Board Member when the Senior Center was being built, spoke about how the center came to be. She said that in 1994 the Senior Center was formed but did not have a physical location. In 1997 the Senior Center bought and furnished a house on Second Street. That house was where the first line dancing classes were held, along with potlucks and other classes. In 2001 the Senior Center was awarded a grant from the Lower Pearl River Valley Foundation in the amount of $240,000. That money, combined with the proceeds from the sale of the house on 2nd Street, was used to establish the current location.

Mayor Luke served on the Board when the annex was being built.

“I enjoyed serving on the Board, and I’ve watched this Senior Center grow. It’s a beautiful and treasured place,” said Luke.

According to Sykes, the Senior Center is the largest in the Mississippi, not in square footage but rather in community participation. It’s also the only private center in the state. An average of 50 people per day attend the center to enjoy one of the several benefits, which is more than any other center in Mississippi.

Current President Mike Fitzwilliam has been on the Board for 12 out of the 20 years. Fitzwilliam called the 20-year anniversary a success story that could not have been achieved without the various donors, participants, Board members, suppliers, and especially the staff.