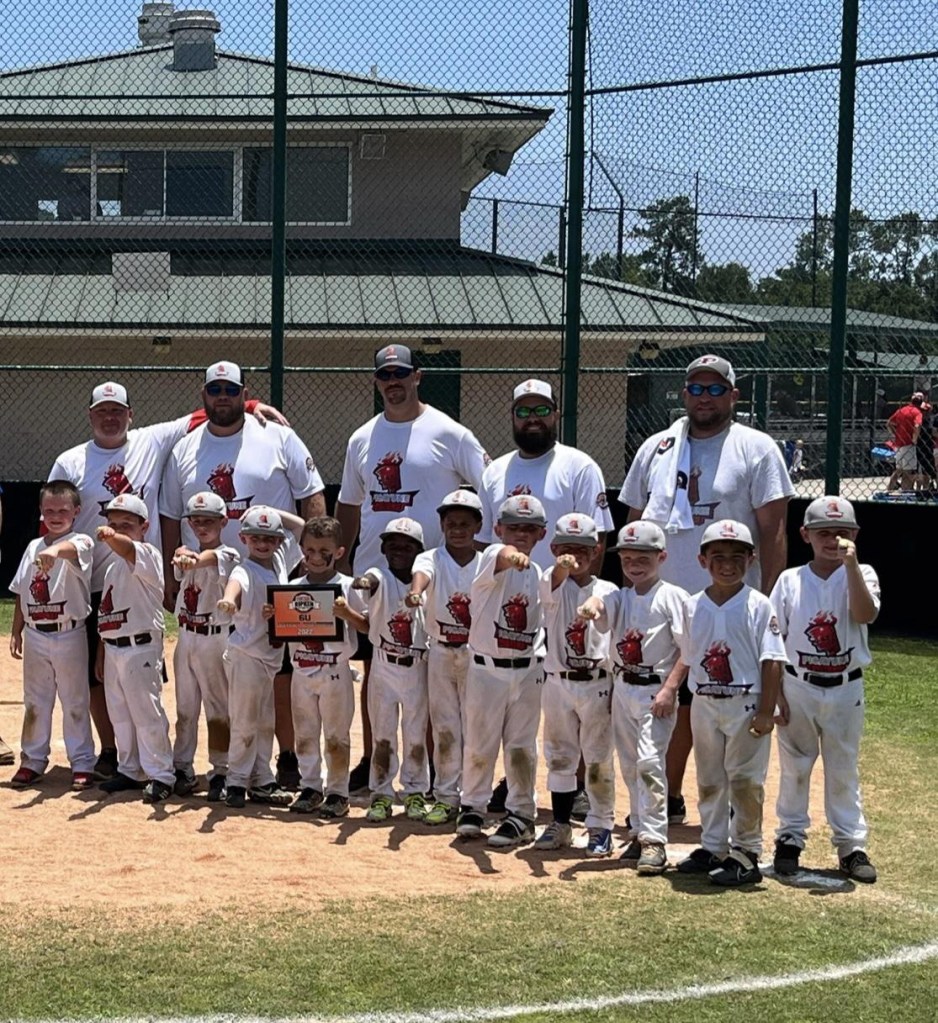 The Picayune Youth Athletic Association Baseball program (PYAA) had two teams claim district tournament championships and another finished as runner-up.
Last weekend in Long Beach, the 6U (ages six and under) T-ball team and 10U Picayune Pistons PYAA All-stars won the district 6 tournament championships and the 7U All-stars finished as runner-ups.
“They are a special group of kids and they are representing the city well,” said 6u Head Coach Phillip Verge.
The district includes teams from Gulfport, Biloxi, Saucier, Orange Grove, Harrison/Hancock, Long Beach and Picayune.
On Friday, the 6u team played Gulfport. Verge said the team won 20-7 before playing Biloxi where the team lost 21-20.
On Saturday, the team played Long Beach and won 18-4 then they played Gulfport and won 21-14.
On Championship Sunday, tjhe team beat Biloxi 22-15. Then they played the one seeded Harrison/Hancock team twice, beating them both times, 27-20 and 20-13 for the district championship.
“It was a solid showing for Picayune and I’m very proud of them,” said Verge.
On Friday the 10u team beat Saucier 9-7, and on Saturday the team beat Long Beach 18-4. On championship Sunday, they beat Gulfport in a three-game series.
This year’s 10u team was coached by Tony Stewart, who said he had a gritty/hard group of kids.
The first game between Gulfport was a pitch fest, but the PYAA team squeezed out a 2-1 win. In the game against Gulfport, the opposing team tied the series with a close 6-5 win.
In game three, the local PYAA defense was hot, and the pitching effort had no errors. Picayune’s team ended up winning 14-2.
“The boys never gave up, the whole time if one player struck out everybody was out there cheering him on and saying ’we got your back.’
The boys really came together and acted like a bunch of high scholars or college kids out there. It’s crazy how they came together and built each other up,” said Stewart.
Stewart said recreation ball might be a dying thing because of the high popularity of travel baseball, but he wants everyone to recognize that there are still some good players in the league.
“It’s good for the community to know you can sign up for PYAA.
You got a good base group of coaches, you can get on a winning team and compete and go out there to your big cities, like Biloxi or your Gulfport teams that have unlimited amount of kids and talent and little ole Picayune can go out there and win it all,” said Stewart.
Picayune’s 10U Allstars was coached by Tony Stewart, Jacob McKinley, Brannon Vedros, Steven Posey and Jordy Meadows and included players, Mason Barnes, Cole Cucinello, D.J. Durr, Colston Mars, Cody McKinley, Beau Meadows, Cody Posey, Easton Stewart, Cohen Uzell, and Peyton Vedros.