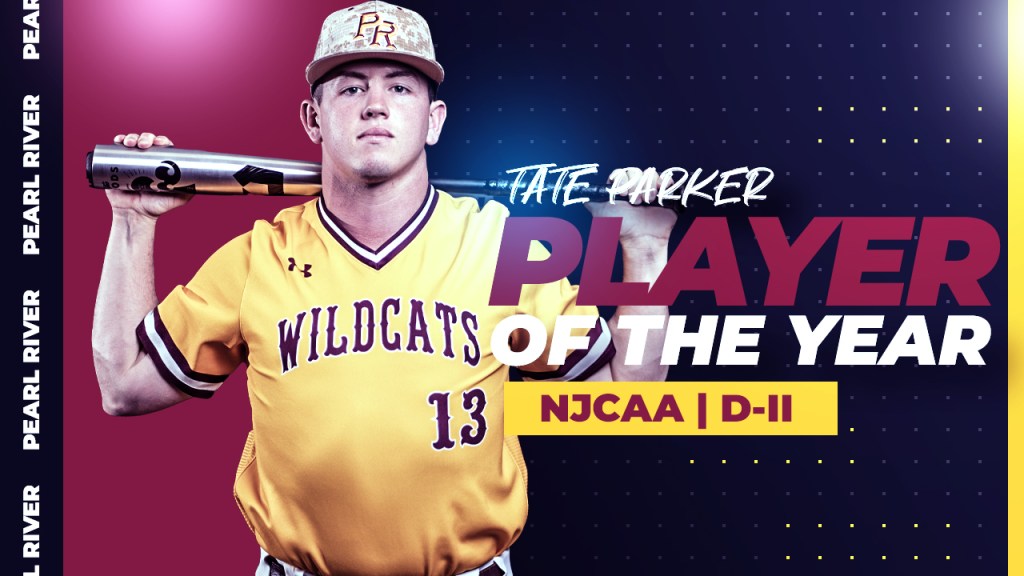 POPLARVILLE, Miss. — Pearl River’s magical 2022 baseball season is long gone but the awards keep rolling in for team leader Tate Parker (Gulfport; West Harrison). On Tuesday, the NJCAA announced PRCC’s center fielder has been named the Division II Player of the Year. The award comes one day after the ABCA and Rawlings named him their NJCAA DII Player of the Year.

“It really makes me proud that God put me in this situation,” Parker said. “I’m very blessed.”

“When I look back at Tate’s time here, what stands out to me is just the impact he had on our program for two years,” PRCC coach Michael Avalon said. “He was the missing piece to take our program to the next level. If you look at all great teams in history, they have a great leader and player at the top and that was Tate for us the last two years.

“Tate can just flat out hit. Over the past two years, Tate led one of the toughest conferences in the country in average, home runs and RBIs. Not only did he excel at the plate, he was elite in all facets of his game; he played phenomenal defense in center field and made an impact running the bases. He’s a true five-tool player.”

Tuesday’s announcement marks the second year in a row the Wildcats have had a player land one of the NJCAA’s national honors. Last year, Landon Gartman (Bogue Chitto; Enterprise) was named the NJCAA DII Pitcher of the Year. Gartman was an All-American Athletic Conference First Team selection and Newcomer of the Year at Memphis in 2022. He recently announced his intention to transfer to Mississippi State.

“If you look back over the last couple of years at our All-Americans, Landon earning Pitcher of the Year, and now Tate, one of the sayings we have in our program is iron sharpens iron and that’s the result of that mantra,” Avalon said. “We’re fortunate to have really good players, but they’re also really good people who work hard, push each other and make each other better.”

The NJCAA honor is a bit of a family tradition as Parker’s older brother, Brandon, won the award while playing for Mississippi Gulf Coast.

“That’s another thing that’s special, that my brother won this same exact award,” Parker said. “There’s more than 1,000 guys who play in the NJCAAA and to be the one to come out on top really makes you proud of who you are and where you came from and the program you play for.”

A HISTORIC CAREER
This season, the Southern Miss commit helped lead the Wildcats to their first NJCAA DII National Championship in program history while holding a .450 batting average, .531 on-base percentage and .820 slugging percentage. He collected 76 runs, 65 RBIs, 29 walks, 19 home runs and 18 stolen bases to go along with his slash line.

In 2021, Parker made an immediate impact for the Wildcats, helping PRCC claim the MACCC Championship. During his freshman campaign, Parker tormented opposing pitchers with a .386 batting average, .476 on-base percentage and .829 slugging percentage. He blasted 18 home runs, collected 65 RBIs, walked 21 times and stole 10 bases.