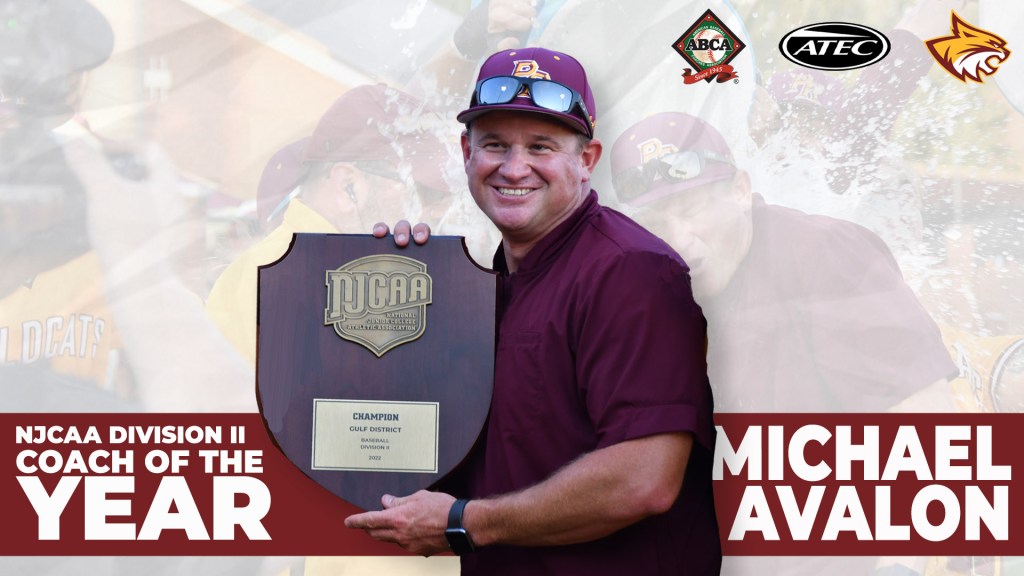 “What an incredible year this has been for our program,” Avalon said. “I am thankful for all the players and coaches, past and present, who believed in our vision for this program and the goal of a National Championship. Being named coach of the year to me means very simply that I was surrounded by incredible people, players, coaches and family.

“Thank you to all involved for the support and belief. S.O.A.P”

Recipients will be honored at the 2023 ABCA Convention in Nashville on Jan. 6.

The honor is just the latest in a season that was filled of them for Avalon and his Wildcats. Most recently, center fielder and Southern Miss commit Tate Parker (Gulfport; West Harrison) was named the ABCA/Rawlings NJCAA D-II Player of the Year on Monday and the NJCAA followed suit Tuesday morning, naming Parker the D-II Player of the Year.

“Michael Avalon has established Pearl River Community College baseball as the premier junior college program in the country. Coach Avalon is a very dedicated, selfless, and tireless worker who sacrifices daily for those around him,” PRCC Athletics Director Scotty Fletcher said. “He is a players coach, who maximizes the ability and potential from every person associated within the program. His teams play with supreme discipline and have a subtle edge about themselves when they take the field and are always fun to watch.

“Coach Avalon has earned and truly deserves this honor as ABCA National coach of the year. This is a true testament to his character and work ethic for the foundation he has laid in his short six years at Pearl River Community College.”

The Wildcats finished the year 45-11 overall after claiming the MACCC Championship — for a second consecutive year — and the Region 23 Tournament title. Pearl River capped the season with a 5-1 record in Enid, Oklahoma. Despite falling in Game 1 of the Championship Series, PRCC rallied to out-score Madison 26-3 in the next two games to claim the 2022 NJCAA Division II National Championship in decisive fashion. With the 7-2 win in the deciding game, PRCC became just the second Mississippi program to win the NJCAA baseball national championship. The title victory also marked Avalon’s 200th win for the Maroon and Gold.

In addition to the head coach, Avalon said his assistants — Slater Lott, Brandon Pennington and Kyle Tynes — deserve their fair share of the credit for helping the Wildcats maneuver through their memorable 2022 schedule.

“When you’re around someone like Michael Avalon he makes you better as a player and person,” Parker said. “You couldn’t ask for a better leader and coach.”

ABOUT ABCA
Founded in 1945, the American Baseball Coaches Association is the primary professional organization for baseball coaches at the amateur level. Its over 13,000 members represent all 50 states and over 30 countries. Since its initial meeting of 27 college baseball coaches in June 1945, Association membership has broadened to include eight divisions: NCAA Division I, II and III, NAIA, NJCAA, Pacific Association Division, High School and Youth.

ABOUT ATEC
ATEC Sports manufactures industry-leading training equipment and machines for elite baseball and softball programs. From training machines to tees, nets and screens, ATEC sets the standard when it comes to equipment today and is the Official Training Equipment of Major League Baseball.