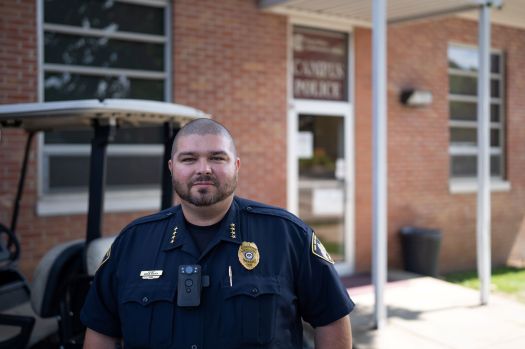 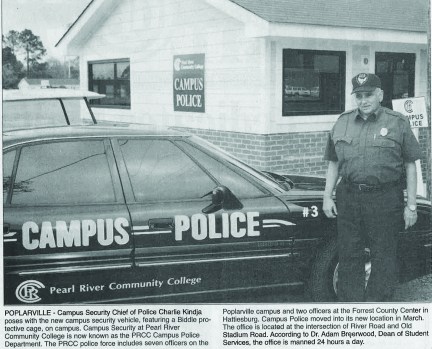 POPLARVILLE, Miss. — When Charles Kindja arrived at Pearl River Community College in 1984, he joined what was then a campus “security” team. During his tenure, a full police department was formed for the campus thanks to his efforts. Today, his grandson-in-law, Albert Eugene (Gene) Keith III serves as the PRCC Chief of Campus Police in Poplarville.

Like police departments for cities and towns, the men and women who work in Public Safety at PRCC wear many hats. They not only enforce local laws and regulations, but they are trained to be first responders for other emergency situations. Crisis intervention is another hat they wear with regular training to help them meet that need on campus.

“Today’s society and how we manage the campus is different than it was even in the 1980s when security teams were the norm,” said Director of Public Safety Butch Raby. “PRCC is like a little city inside Poplarville with us observing all the same laws the local communities follow.”

There are two campus police stations with certified staff to keep our students and employees safe; one located on the Poplarville Campus and one on our Forrest County Campus. The Hancock Campus has a security guard on site.

“We see people in the worst and the best of times,” said Keith. “We wear many hats, some of which people do not see but make a difference. Our sole purpose is to make this campus a safe place for everybody.”

To get grants, officers need to be certified through the state to standards. This includes training hours plus going through the police academy. Additionally, the department has annual training to keep their skills current.

“It’s been said this is the best kept secret in law enforcement — working for a college,” said Keith. “You still deal with a lot of the same stuff you do on the street, but you can help guide students making the transition from childhood to adulthood.

“We can help them learn that with every action comes a consequence and that everywhere has rules and regulations. You get to watch students grow and then some come back to PRCC.”

ABOUT CHARLES KINDJA
From 1958-1962, Kindja joined the United States Navy, serving as a SOG3 (Special Operations Group), a precursor to the Navy Seals. He then joined the New Orleans Police Department where he worked his way up the ranks to Sergeant before retiring in 1984.

He then began his new career at PRCC in the security office to start. During his tenure, he attended training at USM so that the college could have a police department. After all officers were trained and passed the tests to become police officers, the college sought and received certification from the state. Kindja then became the first Chief, a role he had until his retirement in 2009.

Law enforcement runs in the family. Kindja’s granddaughter Casey McInnis serves as the director of the 15th Circuit Intervention Court program for MDOC. His other granddaughter Brittney Keith served as a dispatcher for the Picayune Police Department and as a corrections officer for the Pearl River Sheriff Department. Both of his grandson-in-laws are committed law enforcement professionals including Keith at PRCC and Chris McInnis currently with the Poplarville School District.

ABOUT GENE KEITH
Keith graduated from Picayune High School and initially became a preacher with a desire to help others. After being a volunteer fireman with the Carriere and Pinegrove Fire Departments for six years, he joined the Picayune Police Department in 2004 as a Reserve officer. In 2006, he was hired as a full-time officer and attended the Mississippi Law Enforcement Officers Training Academy. Shortly after his training, he was promoted to Patrol Sergeant. He also served as the head of the Field Training Officer Program.

He came to PRCC in 2012 with a quick promotion to Patrol Sergeant. He was promoted to Chief of Police in 2021.

Keith is also a founding member and former Vice President of the Mississippi Chapter IX Blue Knights International Law Enforcement Motorcycle Club. He lives in Poplarville with his wife Brittney. Together they have five children and one grandchild.

“Gene has been in law enforcement for 18 years, 10 of which have been here,” said Raby. “He’s continued to do an excellent job and is an asset to this institution.”