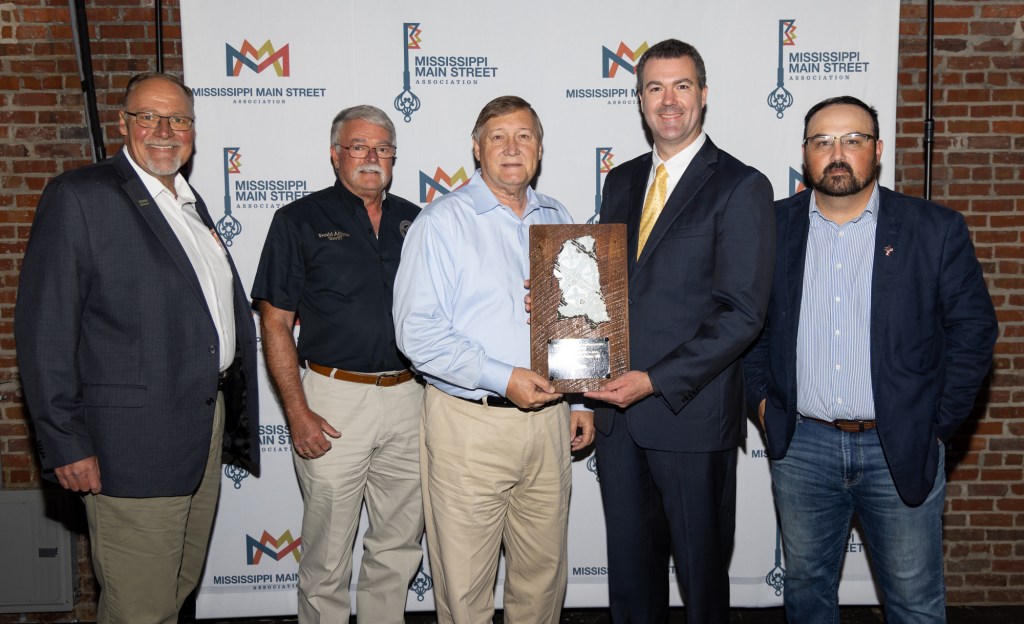 According to a release from Mississippi Main Street, “this award is given to the downtown organization that has displayed the most impactful campaign in securing funds for a specific project.” The award was presented to representatives of the city of Picayune on July 16, in Jackson, Miss. Picayune Main Street Inc. received the award for holding a jail and bail, called Save Our Park Jail and Bail last year.

According to the nomination submission, the City of Picayune was awarded a $1.9 million BP grant, which requires a 20 percent match from the city. The Save Our Park Jail and Bail was organized by Picayune Main Street Inc. and various representatives of the city of Picayune along with Sheriff David Allison to help raise the money to meet the match.

During the Jail and Bail event, Judge Tom Bean issued over 120 “warrants” and “wanted” posters for “local criminals,” who were actually prominent members of the picayune community who agreed to be “arrested” until the community could raise the money to meet the bail. A western style jail was constructed by employees of the Picayune Public Works Department, while Pearl River County Sheriff David Allison and his deputies made arrests based on those “warrants.”

“Those arrested were allowed to call for assistance to pay their bail money and a Port a Potty was supplied for emergencies. The Jail & Bail Fundraiser was a BIG success raising over $45,000. The Picayune community looks forward to enjoying the park upgrades for years ahead!” according to the press release.

“Picayune  Main Street, Inc. Board of Directors and Event Committee members are very excited the Jail & Bail Fundraiser received the MMSA Outstanding Fundraising Award. Our
community looks forward to enjoying the park upgrades for years to come and proud funds raised were used to be a portion of the 20% Match  for sporting  fields & the playground,” said Picayune Main Street Inc. Director Reba Beebe in a written statement.

The grant funds have already been used to rebuild Kid’s Kingdom at Friendship Park with the remaining funds being earmarked to upgrade ball fields with artificial turf, conduct improvements to the tennis courts and other improvements. To help the city raise the money needed to meet the 20 percent match for the grant, the Jail & Bail fundraiser was organized by members of the Picayune Police Department, Pearl River County Sheriff’s Department, and Picayune Main Street, Inc., the release states.