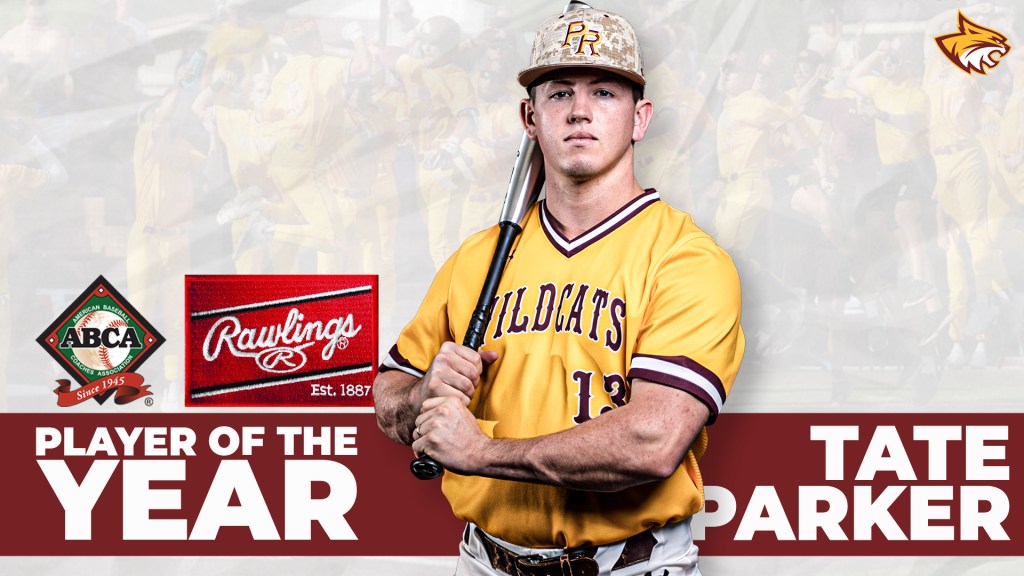 The honor adds another to the list that Parker has compiled this season. He has already been named NJCAA First Team All-American, First Team All-MACCC and All-Region 23. He also took home MACCC Player of the Week honors twice during the year.

“What a perfect end to an unbelievable two years at Pearl River,” PRCC coach Michael Avalon said. “He was the same guy every day; hardworking, humble, and handled all the expectations. As his 2022 National Champion Team will live in the history books forever, so will Tate — the greatest two years for a player in Pearl River history.

The ABCA’s All-America committees in each respective division selects the Players of the Year.

A HISTORIC CAREER
The right-handed hitting Parker made an immediate impact for the Wildcats upon his arrival at Pearl River, finishing his 2021 freshman season with a .386 batting average, .476 on-base percentage and .829 slugging percentage. He blasted 18 home runs, collected 65 RBIs, walked 21 times and stole 10 bases.

Returning as a sophomore, it was hard to expect Parker to replicate such an incredible season, but he managed to turn in an even better performance than the year prior.

Parker helped lead the Wildcats to their first NJCAA DII National Championship in program history while holding a .450 batting average, .531 on-base percentage and .820 slugging percentage. He collected 76 runs, 65 RBIs, 29 walks, 19 home runs and 18 stolen bases to go along with his slash line.

ABOUT ABCA
The ABCA, founded in 1945, is the primary professional organization for baseball coaches at the amateur level. Its over 13,000 members represent all 50 states and over 30 countries. Since its initial meeting of 27 college baseball coaches in June 1945, Association membership has broadened to include eight divisions: NCAA Division I, II and III, NAIA, NJCAA, Pacific Association Division, High School and Youth.

About Rawlings
Rawlings Sporting Goods Company, Inc. is an innovative manufacturer and marketer of sporting goods worldwide. Founded in 1887, Rawlings is an authentic global sports brand, trusted by generations of athletes of all skill levels. Rawlings’ unparalleled quality and expert craftsmanship are the fundamental reasons why more professional athletes, national governing bodies and sports leagues choose Rawlings. Rawlings is the Official Ball Supplier and Batting Helmet of Major League Baseball®, the official baseball of Minor League Baseball™ and the NCAA®, and an approved baseball, basketball, football and softball of the National High School Federation®.