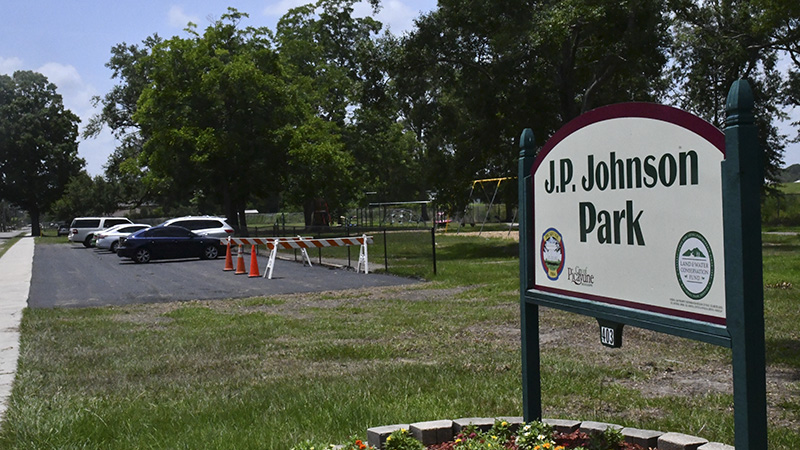 What used to be gravel or grass parking lots at J.P. Johnson and Leola Jordan Parks in Picayune are now paved in asphalt. Photo by David Thornton Jr.

Since the beginning of May, Leola Jordan Park and J.P Johnson Park have been undergoing improvements in the form of new playground equipment, asphalt for the parking lot and a new restroom.

Leola Jordan Park has a new asphalt parking lot, a new set of playground equipment and a new restroom is currently under construction. Parks and Recreation Director Trevor Adam estimates the restrooms will be finished by the end of July.

J.P. Johnson Park also received a newly paved parking lot and a new set of playground equipment. The parking lots were the result of an agreement with the county to provide manpower to pave the parking lots while the city provided the supplies.

“It was a really mutually beneficial partnership on behalf of the city and the county with the paving of Leola and also paving at J.P Johnson. I’m extremely grateful to be able to come together on that,” said Adams.

Installing the restroom and playground equipment was funded by a grant from the Lower Pearl River Valley Foundation totaling $102,086 and the asphalt was funded through the city’s budget.

Grand openings for both parks will be scheduled once the  restrooms at Leola Jordan Park are finished. Dates and times for the grand openings will be announced at a later date.

“We’re looking forward to having the grand opening and the family day out there, and we’re excited about it,” said Adams.

Other park projects that are still underway in the city of Picayune include artificial turf fields at the baseball and softball fields at Friendship Park. Adams said the city expects to open bids for the artificial turf fields on June 27. This project is funded through a BP Gulf Coast Restoration grant, in which the city received $1.9 million for major project improvements. The city will provide a 20 percent match to receive the grant. This project also includes adding additional soccer fields at Friendship Park.