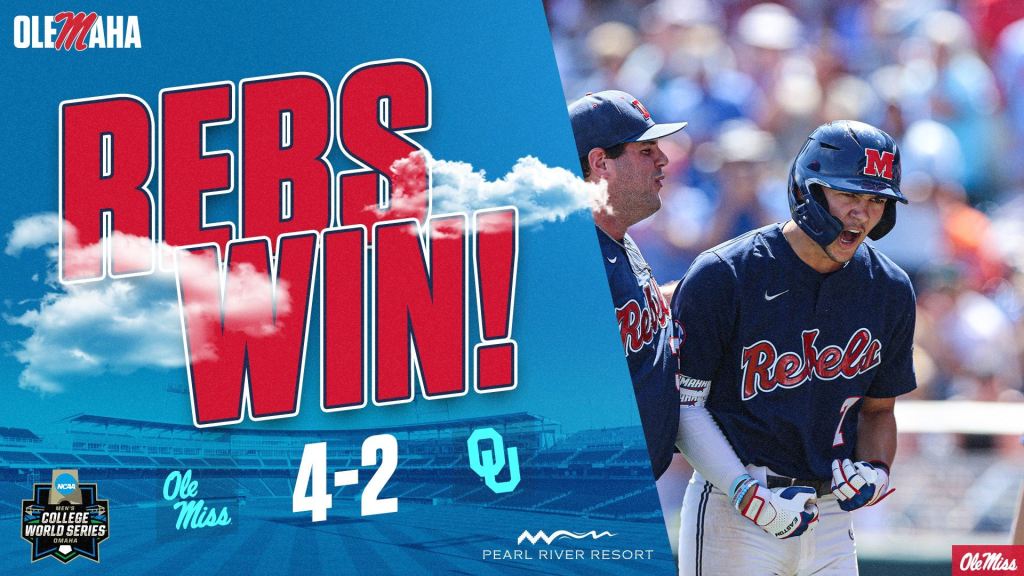 OMAHA, Neb. – The last team to make the field of 64 has officially finished on top as No. 8 Ole Miss claimed the 2022 national baseball championship on Sunday with a 4-2 win over No. 4 Oklahoma at Charles Schwab Field.

The Rebels finished the season 42-23, winning 10 of 11 games during a magical run through the postseason. It is the first baseball national championship in program history.

The game was scoreless through the top of the fifth inning as starter Hunter Elliott for Ole Miss and Cade Horton of Oklahoma were pitching effectively for their respective teams. Then came the bottom of the sixth. Just minutes after an obstruction call at first base erased a Sooner run in the top of the inning, a one-out solo home run for Jacob Gonzalez to right center gave the Rebels a 1-0 lead.

But after Gonzalez’s homer, things got interesting the rest of the way. The Sooners scored two runs with two outs in the seventh and chased Elliott from the game. Before the inning was over, both Mason Nichols and John Gaddis had pitched for the Rebels, and the Sooners led 2-1.

There was no more scoring until the bottom of the eighth when Ole Miss plated three runs to take a two-run lead at 4-2.

With one out, TJ McCants singled up the middle. OU replaced starter Horton with Trevin Michael, and things began to unravel even more for the Sooners.

Justin Bench singled to right field and McCants moved to third. Then, Gonzalez singled through the right side to score McCants and make it 2-2. Gonzalez then advanced to second on a wild pitch and Bench scored for a 3-2 Rebel lead. Elko grounded out and Gonzalez moved to third, scoring moments later on yet another wild pitch. Ole Miss was up by two runs with only three outs left for the Sooners offensively.

Brandon Johnson came in for the top of the ninth to replace Gaddis. Three strikeouts later and the dogpile was on.

Ole Miss managed six hits to only three for Oklahoma. There were no errors in the well-played contest before a crowd announced at 25,972.

Ole Miss is scheduled to return home to a welcome part at the Walk of Champions on Monday at 2 p.m. CT. More details will be released when available.

Keep up with all the latest news and information on the Rebels by following Ole Miss baseball on Twitter at @OleMissBSB, on Facebook at Facebook.com/OleMissBaseball, on Instagram atInstagram.com/officialolemissbsb and on TikTok at @olemissbsb. Also, follow head coach Mike Biancoon Twitter at @CoachMikeBianco.