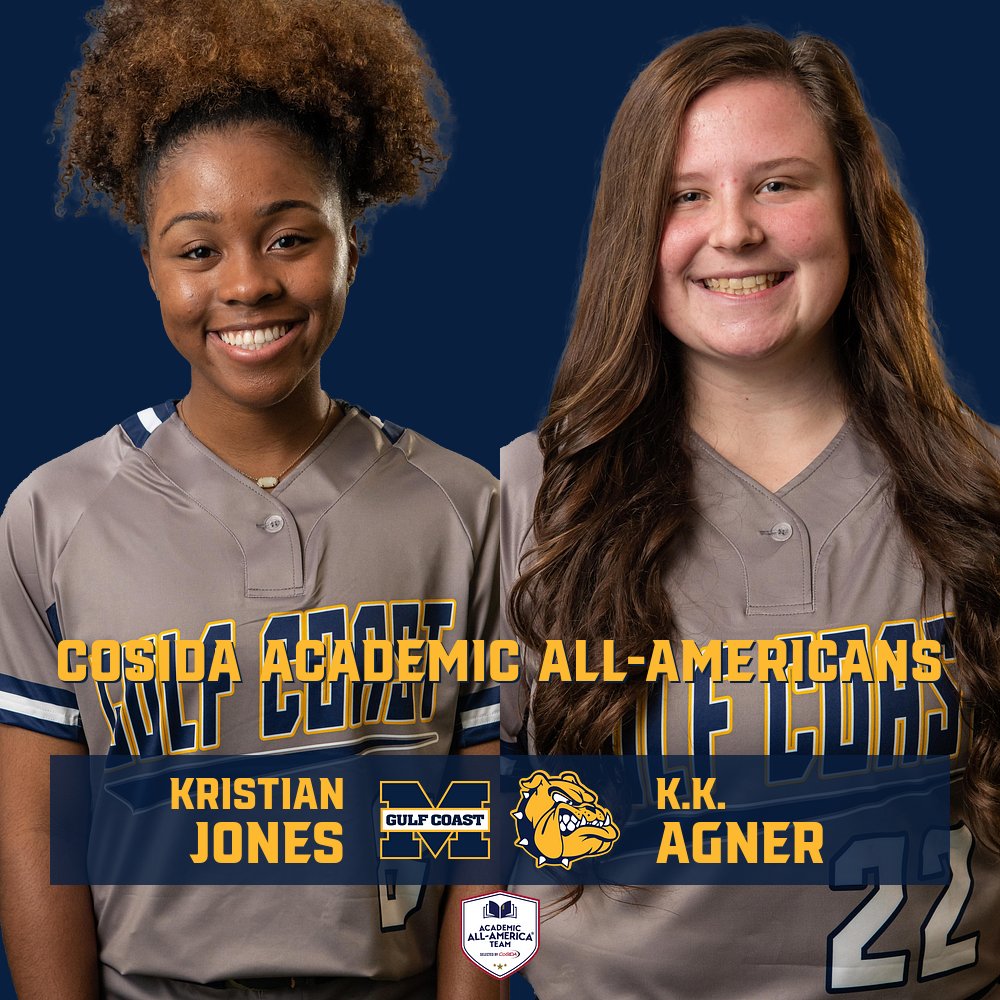 Kristian Jones and K.K. Agner became the fifth and sixth Bulldogs to receive the honor since the 2018-19 academic year by making this year’s nine-person squad, announced the College Sports Information Directors of America today. Gulf Coast tied with two other schools for the biggest representation on the team (Florida Southwest, Jones). The College Division honors student-athletes from all sports at two-year schools and Canadian institutions

The nine members of the team had an average GPA of 3.93, with six having perfect 4.0 marks.

Jones was one of those with a 4.0. The sophomore second/third baseman from Southaven graduated with an associate’s degree in general health professions. She had scholarship offers to continue her collegiate softball career but made the hard decision to hang up her glove and head to Mississippi State. She’ll be in the pre-vet program and hopes to apply to the veterinary school at State and other places.

Improved time-management skills were among the things Jones gives credit to Gulf Coast for in helping her on the academic front. She took full advantage of the Learning Resource Center on campus.

“Going in there after practice for study hall hours and getting extra help was great,” she said. “The instructors are dedicated to helping you outside of class. They’re always helpful and let you come in after class to get extra help. That was always a good thing to take advantage of that offer.”

The criteria for voting on the CoSIDA Academic All-American Team also includes on-the-field exploits, and Jones shone there, too. She was named to the All-MACCC team as a freshman, when she helped lead the team to a fourth-place finish at the NJCAA championship. She batted .394 with 12 home runs, 14 doubles and 62 RBI. She batted .399 as a sophomore and finished third in the conference with 18 doubles and fifth with 67 hits.

“I tried not to put as much pressure on myself and try to do my best at everything,” Jones said. “I had to realize failure is a part of it, and it’s hard being a student-athlete but I found a way to balance everything. I always put school first and athletics second.”

Agner graduated with a 3.8 GPA in pre-physical therapy. The sophomore first baseman from Horn Lake intends to pursue that major at her next college, but she’s still undecided where that will be. Agner starts play in the Florida Gulf Coast League, a college summer league based in Bradenton, on Thursday. Its 25-game schedule runs through late July, and she’s hoping to drum up more scholarship offers down there.

Like Jones, Agner said learning new ways to overcome procrastination were the biggest things she picked up at Gulf Coast.

“Time management was the big thing,” she said. “I’m not the best at it, but you get better as you go along. You have to figure it out.”

Agner, too, was a vital cog on the 2021 team that finished fourth in the country. She earned All-NJCAA Region 23 and All-MACCC honors after batting .390 with 14 home runs and 52 RBI. She led the Bulldogs this year with 10 homers and 34 RBI.

She credited the facilities she had at Perk both athletically and academically with helping her improve.

“I could use the facilities at softball any time I wanted,” she said. “When I was procrastinating, I forced myself to do things in the LRC.”

Gulf Coast Athletic Academic Advisor Julie Newell coordinates with student-athletes, coaches, instructors and administration to keep Bulldogs pointed toward graduation. Both Jones and Agner are expected to be named to the NJCAA and MACCC All-Academic teams, which Gulf Coast typically leads the conference in representation.