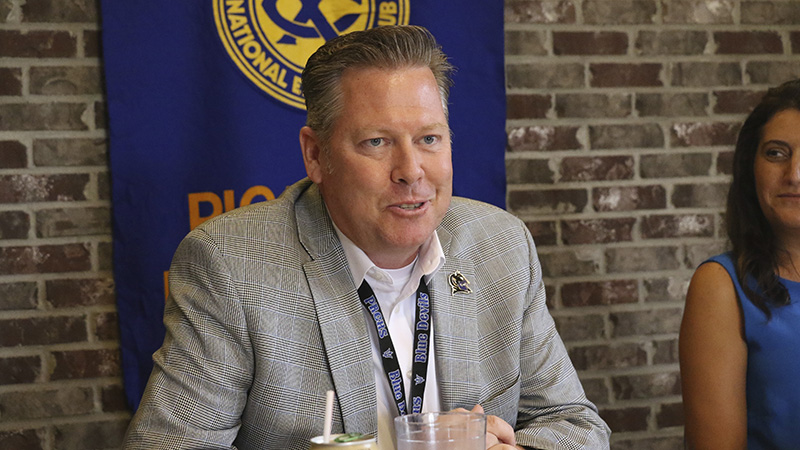 Former Pearl River Central Superintendent Alan Lumpkin will take what he’s helped create at PRC and carry it over to the Scott County School District as that district’s new superintendent. Lumpkin has 27 total years of working in public school education, which include roles in administration, coaching and teaching. Of that time, 18 years were at the Pearl River County School District. He holds a National Superintendent Certification from the American Association of School Administrators and is a member of the Mississippi Association of School Administrators.

Lumpkin is a PRC alum and appreciated the school district’s investment in him, which is why he took the original job in 2004 and has stayed at PRC since.

“I’m a direct result of the investment that the teachers and the coaches from this district made in me. So I wanted to come back here and return that investment to the kids and the community,” said Lumpkin.

Lumpkin’s new home, Scott County, is a rural school district similar to Pearl River County’s School District. It’s located in central Scott County, in between Jackson and Meridian. What sold Lumpkin on the new position were the similarities in the two districts. He is also excited to begin a new chapter in his life and career.

“It’s a rural school district, great people, it has students and families that I’m familiar working with. Not only that it’s a new challenge and a new endeavor for me, so it excited me to have the opportunity to start a new endeavor and start building a new team just like we did here. My goal is to go there and replicate the success that we’ve had here and what we’ve built here over that last 10 and a half years with this team,” said Lumpkin.

At the end of the day, Lumpkin’s mission is to ensure students earn a high school diploma and set them up to be successful in the next chapter of their lives. Lumpkin plans to make it clear that he’s there to serve the students, and staff at Scott County.

“I think in the leadership role, especially as superintendent, a lot of people want to take the term boss or school boss when it’s directly the opposite of that. Superintendents serve everyone, the school leaders, and the district leaders and supports them and provides them with the resources so they can provide an excellent education opportunity for the kids,” said Lumpkin.

As his first role as superintendent, Lumpkin said he could write a book about the things he’s learned at PRC over the past 18 years. There is one thing he won’t forget, the aspect of building a great team and knowing what to look for in great leaders. He added that PRC has great leaders in the schools and in the district’s various departments. As he prepares to head to Scott County he said he knows how to be a great leader because he’s been around them at PRC for last 10 and a half years.

“I can take that experience to Scott County as I look to build leadership capacity in the leaders in Scott County,” said Lumpkin.

Another thing Lumpkin wants to continue in his new role will be being connected with the students. He said the struggle with taking on position as a leader is that they tend to be drawn further away from the students. As he takes on the role in Scott County, Lumpkin said he will continue his efforts to remain active by attending athletic and extracurricular events, student council meetings and making his presence known in the schools.

“Being involved with kids is very important to me and maintaining that relationship with those kids,” said Lumpkin.

Lumpkin says he will miss the people of Pearl River County, including the students, parents, teachers, and the community because the people are what make PRC great to him.

He said he sees the same potential in Scott County. Lumpkin has been to Scott County several times in the past weeks and even though he doesn’t have a longstanding relationship with the community yet, he senses the two counties are very similar.

“(They have) very good family oriented, hard working people that want to see their children succeed and want to see a school system that’s going to provide them the opportunity to be successful and get a great education. I’m looking forward to building those relationships there.”

Lumpkin said the decision to leave was vey difficult.

“This team here at PRC is a very highly effective and a highly efficient team but I’m excited about going to a new place with very similar people, hard working people that want to make a difference, and build that again.”

In the interim until the Board of Trustees determines a replacement for Lumpkin, Dr. Stacey Boudoin has been named as the interim superintendent.