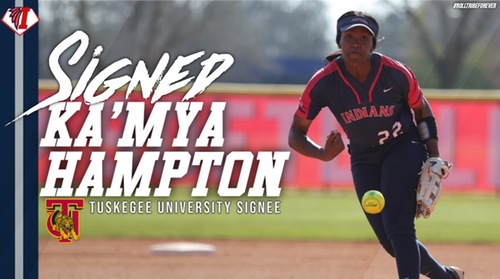 Hampton completed her sophomore season with a 15-4 record, while striking out 99 batters in 100 innings of work. She had a 2.17 ERA, the highest among the Indians’ starters, and pitched in 26 games.

Hampton’s best performance came in the Indians’ 5-0 win over Southwest where she threw a complete game shutout and struck out 14.

As a freshman, Hampton helped the Indians win the Mississippi Association of Community Colleges Conference (MACCC) regular season championship and went 4-0 with 27 strikeouts and a 2.49 ERA in 25 and a third innings over 14 appearances.

Hampton will join a Tuskegee team that had a successful 2022 season. The Golden Tigers won the Southern Intercollegiate Athletic Conference (SIAC) Championship and advanced to the NCAA Division II Regionals.