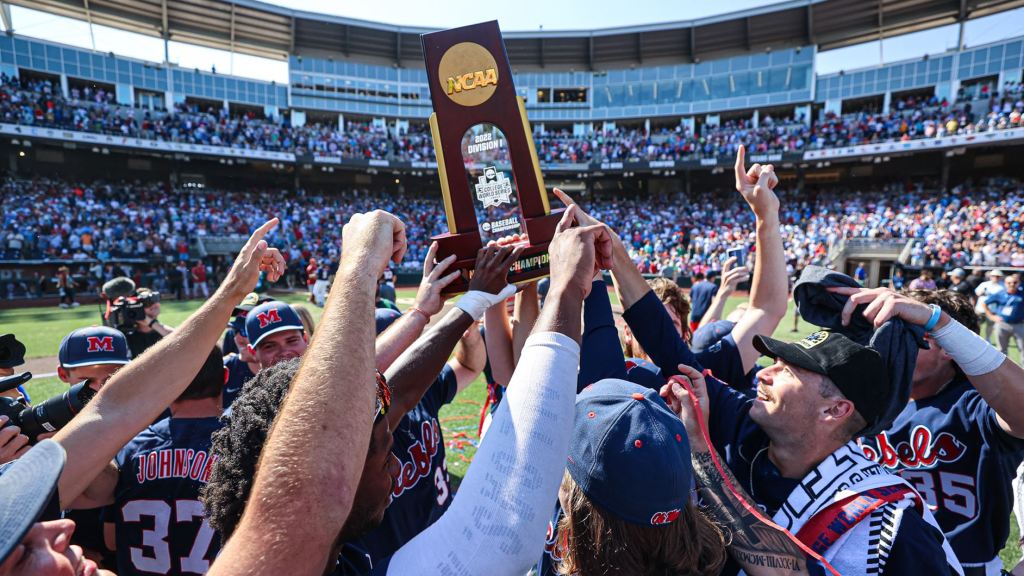 OMAHA, Neb. – Call these Ole Miss Rebels National Champions. It is what they now are.

It was a long time in the making, this championship for Ole Miss baseball, won at the 2022 College World Series. In their sixth appearance, the Rebels finally got it done.

Mike Bianco has built a program that for all of the 21st century has been as solid as any in the country and normally a top 10-15 finisher. But getting to that final eight in this Missouri River town had been challenging, and only in 2014 had it happened for him and any of his teams.

Then in 2022, perhaps in the most unlikely manner as the last team chosen for an at-large bid, the Rebels took advantage and won the whole thing. Sunday’s 4-2 victory against Oklahoma, coupled with Saturday’s 10-3 win against the Sooners, gave Ole Miss new hardware for its trophy case.

“I’m a little out of words,” said Bianco in the postgame press conference underneath Charles Schwab Field after having spent at least an hour on the field for ceremonies, well-wishes, and additional media opportunities.

Actions speak louder than words anyway, and Bianco’s 22nd Ole Miss team spoke louder with its play than any team in college baseball the past month.

“Just so proud, as you can only imagine, to get to this point,” Bianco said. “We’ve talked about it the whole time here, the journey that this team has been through and where they’ve come from.”

Where they were is well documented, from a No. 1 ranking earlier in the season to a swoon of sorts in the middle of the season to the strongest finish an Ole Miss baseball team has ever had.

“People say, ‘How’s the leadership?’ Well, you can’t answer those questions until the season is over,” Bianco said. “You find out at the end what you’re made of.”

This team was made of leadership of all classifications, from veterans like Tim Elko, Justin Bench, and Kevin Graham, to newcomers who made a real impact, like Hunter Elliott and Mason Nichols and Dylan DeLucia, who was named the CWS MVP.

Notice that many of the veterans were position players and hitters. Many of the newer arrivals were pitchers that stepped up. Along with solid defensive play the past month, it all worked together to field a championship team.

“It’s kind of hard to put (emotions) into words,” said DeLucia, who made a postgame media appearance on stage with his head coach and other teammates. “I just feel blessed to be a part of this team, to be a part of these coaches. They’ve taught me so much this year. I’ve grown up so much just in that aspect of being a teammate, being a better teammate.”

“He’s like a mentor to me, the way he’s just picked me up, kept me going, put my head on straight. I’ve never seen someone like that, and it’s truly a blessing to have this team and this coaching staff.”

Elko has seen life as a Rebel from all sides, from losses in Super Regionals and throughout the Covid situation which ended the 2020 season early to this national title. And now it is time for a new chapter for him but not without many reflections on these past few years.

“It hasn’t really quite sunk in yet that this was my last game in an Ole Miss baseball uniform and playing with this team and the guys that I played with for so many years,” he said. “Right now, I’m just proud to be a national champion and to be a part of a team that did some amazing
things this year.”

Bianco applauded the crowd of Ole Miss fans who made the trip, some 20,000 or more at each of the games against Oklahoma.

“This is a special group,” he said of his team. “And (fans) knew it was a special group. During the trophy presentation when you look in the stands, the stadium holds 25,000, and it looked almost still packed. That’s how many fans we had here.”

Elko said his time at the University of Mississippi has been so impactful on his life and his future.

“I came back and it was the best decision I could have ever made.”

On Sunday, he and his team were rewarded with the best moment they could have ever imagined.

Call them National Champions. It is what they now are.