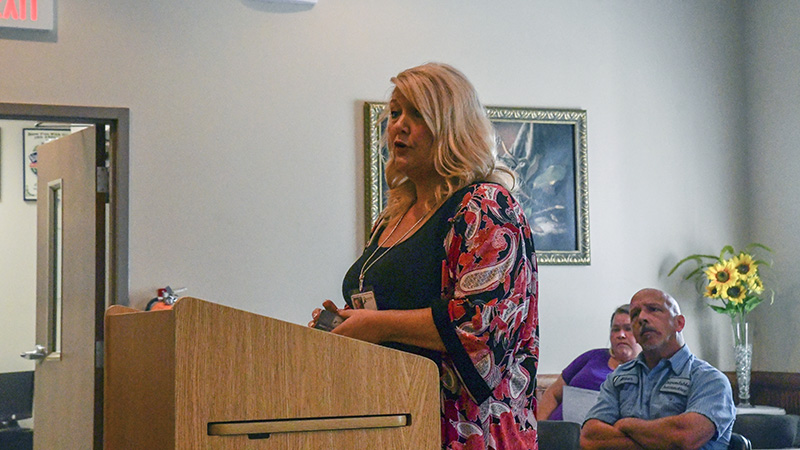 President of Jacob’s Well Susan Johnson gave a presentation about Jacob’s Well Ministry to Poplarville’s Board of Aldermen during Tuesday’s meeting. Photo by David Thornton Jr.

To open Tuesday’s Board of Aldermen meeting, President of Jacob’s Well Susan Johnson gave a presentation about Jacob’s Well Ministry. She provided the Board with a thorough rundown of the program, its purpose, and whom they serve. Jacob’s Well is privately owned and operated.

Jacob’s Well has been a part of the Poplarville community since 2005 and has grown to three campuses. The program’s goal is to assist in total family restoration for those that have been negatively impacted by their loved one’s addiction by including the family in the recovery process and encouraging faith –based values of forgiveness, integrity and discipline. Jacob’s Well was started by Johnson’s parents, Pam and Charlie Hanes.

“Through my father’s addiction, he received Christ at the age of 50-years-old and at that time he said, ‘I just spent 50 years doing everything I can to destroy my own family’s life. I’m going to spend the next seven years…I have seven years I’m going to do everything I can to build other families.  So he started a men’s recovery center in Chunky, Miss., and then five years later came here and began Jacob’s Well recovery center for woman,” said Johnson.

Ten years later, Johnson began the Damascus Road Recovery Center that has since grown to include two campuses for second step and a third step recovery centers.

“When men or women walk over the threshold of Damascus Road of Jacob’s Well they are in an active addiction. We spend six months doing everything we can to not treat the addiction because we believe drugs and alcohol are their solution not their problem. So what we do is go to the root problem, find out what happened in their life that made them start dealing with drugs or alcohol or other toxic situations,” said Johnson.

Once they’ve completed the six months in the first step of the program, they are offered a spot in the second step program. Jacob’s Well partners with several businesses in and around Pearl River County to provide participants with jobs.

Jacob’s Well has two campuses in Poplarville, one for men and another for women.  There is space for 50 men at the men’s facility and 30 women and the women’s facility.

Some of the benefits the Jacob’s Well participants experience include, free medical, vision and dental care through Coastal Family Medical along with free transportation to medical appointments and court and court related agency reporting for those who have legal attachments. Sixty percent or more of the cost for participants is covered by Jacob’s Well Ministry through operational activities and the public’s support. Jacob’s Well helps people with addiction, trauma, and provides emotional, spiritual and relationship/family coaching.

Most may recognize Jacob’s Well as a thrift store, since there are currently a total of five stores, two of which are in Poplarville, and one is in Picayune.

The women involved in the program learn a trade while working at Jacob’s Well. The first 90 days of the program they are trained in every aspect of running a business from the ground up. After 90-days, they are tasked with running the store on their own.

Johnson has also opened up three boutiques for the women to work in.

Jacob’s Well has also partnered with Graceland Portable Building Company to teach the men in the program a trade in portable buildings.

When members graduate from Jacob’s Well they can continue working and start off making $12 an hour and potentially grow to making $20 an hour in the portable building field.

“When they graduate and decide to go out into the work force they don’t have to apply to just a regular hourly job, they can actually be hired for a management position which is a game changer for single moms or single dads,” said Johnson.

Over the 17 years Jacobs Well has been around, Johnson believes the thing they do very well is everything they can to take a person from pulling money from the judicial system, the county, and the state for whatever reason, and get them off of that.

“We get them on a budget, work on their credit, and get them to where they can come off any kind of food stamps,” said Johnson. “It’s been a phenomenal thing to be a part of. I know a lot of times when people hear Jacob’s Well they just think thrift store but we’re way more than a thrift store. It’s been a phenomenal thing and we’re honored to call Poplarville our home.”