How to prep for hurricane season 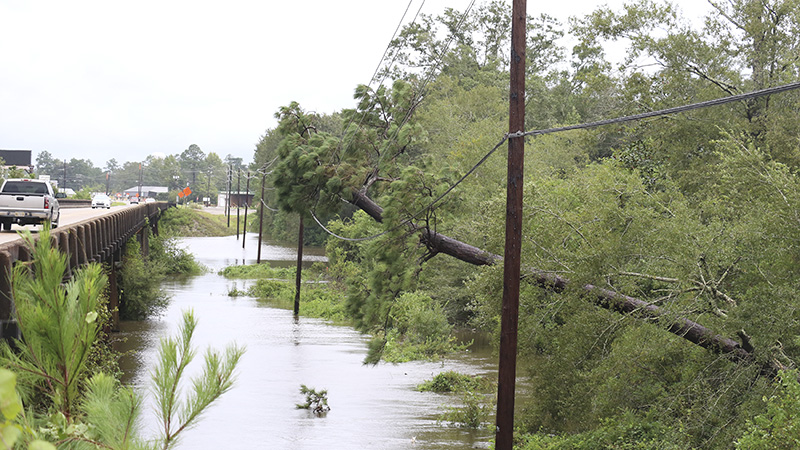 Falling trees in Pearl River County due to high winds from Hurricane Ida led to more than half of the county's population to be without power. This tree is resting on power lines along the Highway 11 bridge that crosses the east branch of the Hobolochitto Creek. Photo by Jeremy Pittari

Hurricane season began this month, so Poplarville Fire Chief Jason Bannister took a moment to provide tips to Pearl River County residents about being prepared before a hurricane enters the Gulf of Mexico.

Hurricane season began on June 1, and will last until Nov 30. While there is no threat of a storm as of this week, it’s never too late to prepare.

Bannister said that when prepping for the season, it’s a good idea to have plenty of bottled water, non-perishable food items  such as canned food, batteries, a flashlight and a first aid kit on hand.

“What a lot of people do before a storm comes is fill their bathtub full of water, for extra water,” said Bannister.

Other items to think have on hand include an emergency generator, portable chargers, and a battery-powered radio.

Here are the best ways for local residents to stay safe during the threat of a hurricane. Banister said it’s best to be prepared, get what the household needs early and to stay home as much as possible, unless an evacuation is suggested or ordered. In the case an evacuation is suggested, residents will be notified through the Pearl Rover County Emergency Operations Center (EOC) and their local Fire Department personnel will work directly under EOC.

“Our plan is basically their plan,” said Bannister.

In previous years, the Poplarville Fire Department and other local emergency responders relay information to residents through Facebook. Through platforms the community can be kept aware of developing situations and hazards as part of the storm.

Bannister said if the hurricane reaches a major category, emergency personnel will go to the homes of residents who will be most impacted by the storm, such as families living in mobile homes, camper trailers and other housing at risk of sustaining major damage. Residents in those homes will be urged to evacuate those residences and find more suitable shelter  or to evacuate. The storm shelter on Rodeo Street in Poplarville is a facility residents can utilize during any major weather events which is also operated by the PRC EOC. Shelters can also be found at Picayune Memorial High School and Pearl River Central High School. As always, the best source for information about a storm is the National Weather Service.

Hurricanes, especially those at a category three or above, can cause extensive damage that affects a town for several days or weeks.

Bannister said the main step to recovery is patience. Emergency responders and city personnel can’t help every resident at the same time, so it’s going to take time. He also suggested to have insurance information ready if the home or other property suffers any damage, and know who to call for getting any damage repaired. Having that information at hand will make the recovery process faster. Bannister said that since Poplarville being is a small town, evaluating the town’s damage and identifying people who need help can take up to 2-3 hours, but after a major hurricane it could take weeks before the recovery process even starts.

“Because after a storm, the first step is dealing with emergencies and then after all the emergencies within the city then we start the recovery process,” said Bannister.

Bannister said residents should not wait too late to get out of the city if they choose to evacuate. Waiting too late could put the family in traffic during the height of the storm creating a much more dangerous situation.

“Don’t wait too late. If you see a storm coming, plan as soon as you see it and know where your going to go early,” Bannister added.

Tips for keeping pets safe in the summer heat