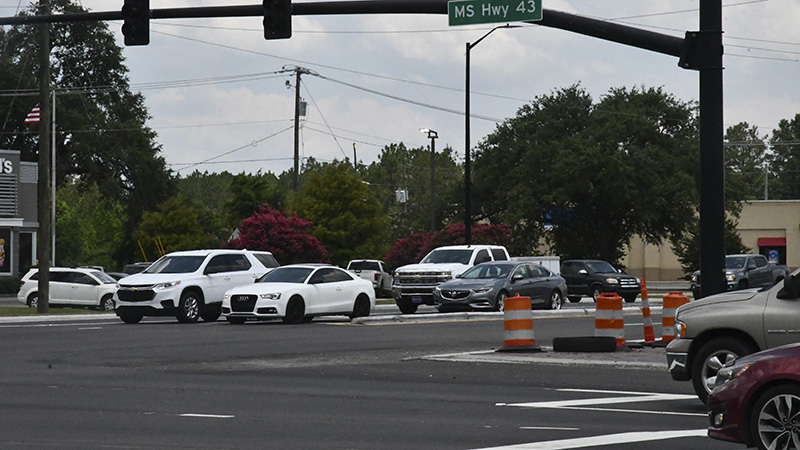 Depending on the direction of travel, the work to widen Highway 11 in Picayune has created two turn lanes, allowing more traffic to flow through town. Photo by David Thornton Jr.

Work to widen Highway 11 in Picayune between Lakeshore Drive and Cayten Street is nearly complete.

Mississippi Department of Transportation Engineer Dexter Childs said phase one of the Highway 11 widening project is about 90 percent complete, and still anticipates it to be 100 percent complete by mid July.

Now, motorists have access to all four lanes of the road, median islands are complete, and the traffic signal work is complete. Tasks still left to complete include finalizing drainage features near some of the properties, adjusting a couple of manholes and completing traffic markers and striping on the asphalt, Childs said.

He added that there may be done some other small tasks to complete between now and mid July, but for the most part finalizing drainage features and adjusting manholes are the major tasks.

Child said that now that all four lanes are open, traffic along Highway 11 flows more efficiently with less congestion.

“Overall I’m happy with the project and how it’s performing,” said Childs.

After this project is complete MDOT, still plans to conduct phase two of the project, which will entail replacing the bridge along the East Hobolochitto Creek. the work will start where phase one finished at Cayten Street, and head south by replacing the bridge. A start date for that project will be announced at a later date.

Cutline; Cars at the new four way stop sign at MS Highway 43 display just how wide the roads are.