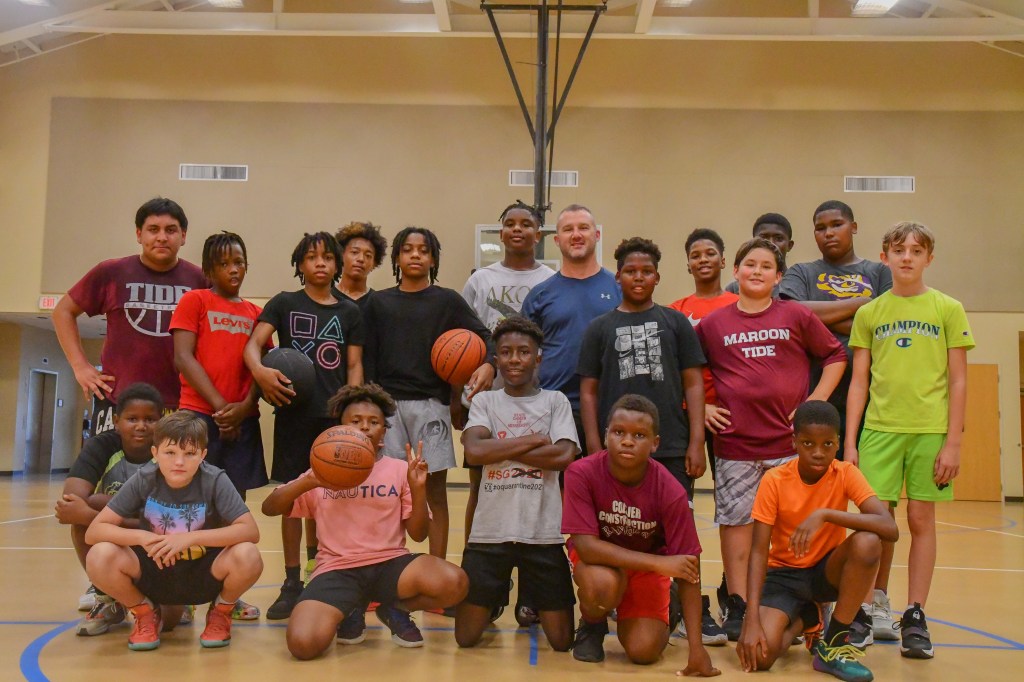 First Baptist Church opens the gym doors every Monday from 2-4 p.m. for Layups and the Link, a program conducted by officers of the Picayune Police Department to engage with the community’s young people.
It’s a great opportunity for junior high and high school kids to play basketball with Picayune’s Chief of Police Joe Quave and escape the summer heat while getting some exercise. Layups at the Link was organized by Quave, who said he did it to help local young people.
“It’s the summer time and it gives them something to do,” he said.
Since the Link has an air conditioned basketball court that wasn’t being used during the summer, Quave decided to make good use of it. He attends First Baptist Church of Picayune, so creating the partnership was easy.
While shooting hoops at the Link, the kids get the opportunity to make connections with each other and potentially develop new friendships or find friendly competitors. It also allows the kids to connect with local law enforcement officers.
“It’s a time for them to learn from each other and make new friends while I can do the same while interacting with them. They’re making friends while we’re learning the kid’s names and stuff that we wouldn’t normally know otherwise, unless we connect with then during an activity like this during the summer time. It’s giving us a chance to know them and them to learn about us,” said Quave.
It’s important for officers with the Police Department to be able to interact with the local children to give them genuine in-person interactions.
“We can learn each other face-to-face. I think there’s a lot of value in that,” said Quave.
There was a lot of genuine interaction during Monday’s session. More than 20 junior and high schoolars played on Monday where there were a lot of laughs, smiling faces and some fun basketball being played. On the court, there was some friendly trash talk and even Quave got involved, fueling the children’s excitement.
In order to keep those good relationships, Quave said his department has to continue to engage the community one on one. To Quave, it’s not an obligation, it’s just needed.
“It’s not just about accountability, it’s about things outside of it. That’s part of our job and that’s what we do and I fully support that and stand behind it but this is also part of our job. If we’re talking about really having a relationship with them, and it means a lot to me… and I expect that out of the guys and ladies that work for me because they expect it out of me,” said Quave.
Being able to see an officer out of uniform and in the kid’s element can help the children see past the negative stereotypes about police. The hope is that will carry over when kids see that local officer in uniform.
“They may need them for help,” Quave said. “This also gives the kids a chance to form their own opinion.”
Quave said God put it in his heart to start Layups at the Link, and he didn’t know what the outcome would look like. The first Monday he held the event, four kids came, but the second Monday, which was on June 12, more than 30 kids showed up. The following Monday started with 15 kids, but grew to over 20.
It’s only been the third week and Quave’s connection with the kids has grown. On a basketball level, the officers and kids have lots of fun and get real competitive.
“They humbled me real quick,” Quave said jovially.
Layups and the Link will last until July 25.