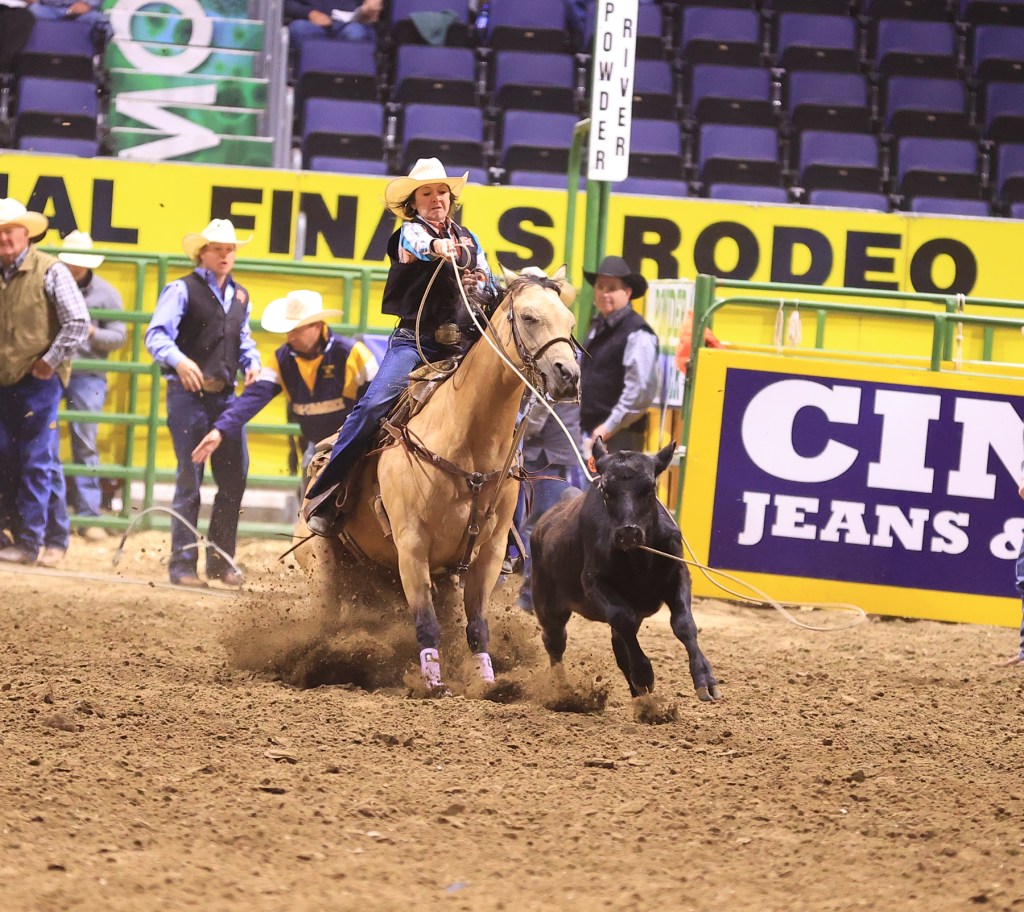 Having entered Saturday’s finals in eighth place overall, Matthews became the lone barrel racer of the week to break the 14-second mark by winning the short-go round in 13.86 seconds and jumping six places to reserve champion (runner-up) status. Her week-long aggregate score of 57.23 seconds trailed only Sadie Wolaver of Southwestern Oklahoma State, who held on to claim the barrel racing national championship with an aggregate score of 56.86 seconds.

Matthews’ championship-round performance netted her 155 points for the week to propel the EMCC women to their second straight national top-10 team finish with 235 total points. Last year’s East Mississippi women’s team earned a program-best, fourth-place finish at the 2021 College National Finals Rodeo after claiming the NIRA Ozark Region regular-season team championship for the first time since the program’s inception in 2010.

A year ago, it was Taycie’s older sister, Jaylie, who made headlines for EMCC at the 2021 CNFR by collecting reserve champion honors in the barrel racing event. A two-time Ozark Region season champion and the No. 1-ranked collegiate barrel racer heading into this year’s CNFR, Jaylie recovered from a slow start in Casper this past week to capture EMCC’s other 80 points with a winning time of 14.13 seconds during her third-round run Tuesday evening.

As did Taycie Matthews, Bryant advanced to Saturday’s finals by virtue of consistent efforts throughout the week. A native of Hatchechubbee, Alabama, Bryant was tied for sixth overall with an aggregate score of 7.7 seconds in the breakaway roping event heading into Saturday night’s short go. The 2020-21 Ozark Region breakaway roping season champion opened this year’s CNFR with a pair of 2.5-second runs followed by a 2.7 effort in the third round before failing to record a time during the championship round. Bryant’s 10th-place tie came on the heels of last year’s eighth-place tie in CNFR competition.

The younger Matthews sister improved her time with each run during her return trip to Casper. Beginning with an eighth-place finish (14.54 seconds) in the first round to earn 10 points, she bettered her times with a 14.43 effort (11thplace) in the second round and a third-round clocking of 14.40 seconds (13th place) before climbing six notches with her championship-round performance.

In men’s competition this past week in Wyoming, EMCC steer wrestler Myles Neighbors, from Benton, Arkansas, came up just short of qualifying for the championship round in his specialty event. The two-time Ozark Region steer wrestling season champion rebounded from a slow start to the week by posting consecutive runs of 6.6 seconds in the second and third rounds to narrowly miss advancing to the finals.

Tie-down ropers Clay Livengood and Tanner Brown highlighted the EMCC men’s action at this year’s CNFR by totaling 110 points between them. Livengood, from Cleveland, North Carolina, collected 75 points early in the week with a pair of fifth-place finishes during the first two rounds by posting solid efforts of 10.5 and 10.8 seconds, respectively. Livengood wasn’t able to generate a score during his third-round run. Brown, out of Florence, rebounded to post a third-round clocking of 9.7 seconds to go along with his first-round time of 10.9 seconds that produced 35 total points via two seventh-place finishes.

The team-roping brother tandem of Cade and Cooper Cowan, products of Marshall Academy, rounded out this week’s scoring for the EMCC men’s squad by tying for eighth place and earning 10 total points with a second-round time of 9.9 seconds. They were unable to register times during the first and third rounds.

On the men’s side, Tarleton State captured this year’s national championship with 900 total points to finish ahead of McNeese State (780 pts), Missouri Valley College (770), Casper College (620), and Three Rivers College (575).