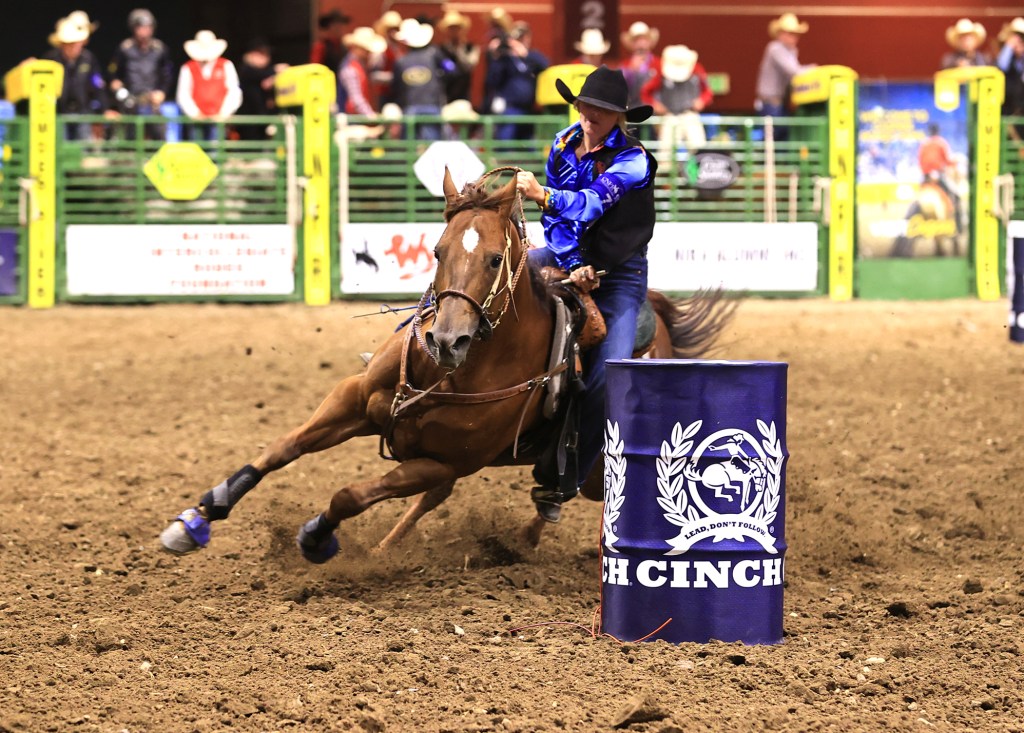 SCOOBA – For the second consecutive year, East Mississippi Community College will be represented by a school-record eight student-athletes at the upcoming College National Finals Rodeo in Casper, Wyoming. The week-long collegiate rodeo championships will begin Sunday (June 12) and continue through the following Saturday (June 18) at the Ford Wyoming Center.

Featuring three-time CNFR qualifiers Jaylie Matthews, Blair Bryant and Myles Neighbors, EMCC is set to have participants in five different events during this year’s national competition. Along with the sister tandem Jaylie and Taycie Matthews competing individually in barrel racing and brothers Cooper and Cade Cowan pairing in team roping, the Lions will also be represented by Bryant (breakaway roping) and Neighbors (steer wrestling) as well as by first-time CNFR qualifiers Clay Livengood and Tanner Brown in tie-down roping.

Finishing the regular season ranked 18th nationally among the National intercollegiate Rodeo Association (NIRA) standings, the EMCC men’s and women’s squads both just missed qualifying as teams for the upcoming CNFR after placing third among the Ozark Region’s standings. The top two men’s and women’s teams as well as the top three student-athletes in nine individual events from each of the NIRA’s 11 regions have earned the opportunity to compete at nationals.

Looking to lead the way for EMCC’s eight CNFR competitors again this year will be current No. 1-ranked barrel racer and reigning CNFR reserve champion Jaylie Matthews. The elder of the Matthews sisters, Jaylie claimed her second Ozark Region barrel racing championship in three years by amassing an NIRA-best 1,225 total points this year. With her six regional event titles on the season, she has claimed 13 career wins after previously securing three first-place finishes as the 2019-20 Ozark Region champion and following up with four titles in her specialty event last season.

Along with the Matthews sisters, Bryant also returns to the CNFR after being a valuable member of EMCC’s 2020-21 team that earned the school’s first-ever, regular-season Ozark Region championship on the way to collecting a program-best, fourth-place team finish at last year’s national finals. The Hatchechubbee, Ala., native tied for third place in this year’s Ozark Region breakaway roping standings after claiming last year’s regional title and tying for eighth place in her specialty event at the 2021 CNFR.

The veteran cowboy of EMCC’s five-man unit headed to Wyoming, Neighbors is also a three-time CNFR qualifier for the Lions. The Benton, Ark., product secured his second Ozark Region steer wrestling championship in three years and finished second nationally with 975 total points. Neighbors was previously rated as the NIRA’s No. 1-ranked steer wrestler two years ago before the coronavirus pandemic hit following his three consecutive regional event wins to begin the 2019-20 fall season. He added a win in his specialty event during each of the past two seasons.

Along with the Matthews sisters on the women’s side, the EMCC men will also feature sibling participation at this year’s CNFR. The Cowan brothers, out of Marshall Academy, qualified for nationals in team roping after placing third in the Ozark Region regular-season standings. The transfers from Northwest Mississippi Community College collected three straight regional event titles this season by closing out the fall with wins at Southern Arkansas and Murray State and then opening the spring slate with a victory at the EMCC-hosted rodeo held in Meridian.

Rounding out head coach Morgan Goodrich’s collection of EMCC competitors headed to this year’s College National Finals Rodeo will be Livengood and Brown, first-time CNFR participants who tied for second-place Ozark Region honors with 535 points apiece in tie-down roping. Livengood, from Cleveland, N.C., captured regional event titles at West Alabama and Arkansas-Monticello, while Brown, out of Florence, prevailed at the Three Rivers rodeo this past spring.

This year’s College National Finals Rodeo is scheduled to be broadcast on ESPN3 with expanded livestream coverage beginning Tuesday (June 14) and running through Saturday night’s finals. ESPN3 is available by downloading the ESPN app from the App Store or Google Play. ESPN3 is also available for online viewing at ESPN.com.­

Following three rounds of slack and performance competitions that take place through Friday night (June 17), the top 12 qualified contestants from each of the nine events will advance to Saturday evening’s championship round. Online results from this year’s CNFR are scheduled to be available throughout the week at CNFR.com.