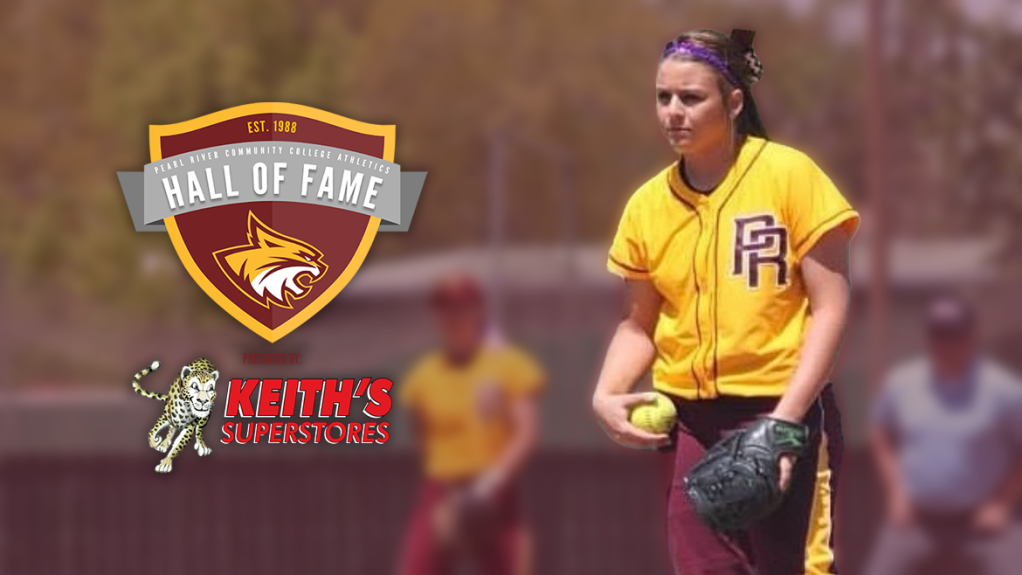 POPLARVILLE, Miss. — Rachel Hickman Kirkland had put her softball dreams aside after spending a semester at the Division I level. Through the persuasion from a former Pearl River coach, she fell in love with the game again.

“It’s an incredible feeling,” Kirkland said. “It’s something that I never expected. It caught me completely off guard. It’s definitely a huge honor. I never saw myself getting into the Hall of Fame, but I am definitely thankful for the opportunity.”

PRCC is also presenting Dub Herring with the inaugural Spirit of a Wildcat Award. The River will recognize its 2002 baseball team during the banquet. Under the guidance of PRCC Hall of Famer Jay Artigues, the ’02 Wildcats were the first PRCC squad to break through to the NJCAA World Series.

Kirkland grew up in Poplarville and was involved in sports from a young age. While she had interests in other sports and gave them a try, it was softball that she fell in love with.

She mostly played the field until she took to the circle for the first time out of necessity.

“When I first started pitching in sixth grade, I hated it,” Kirkland said. “No one else in our recreational league could throw the ball over the plate, so my parents sort of made me pitch. It was in eighth grade that I really fell in love with pitching and that was it for me. That was the only thing that I wanted to do from then on.”

Kirkland burst onto the scene at Poplarville High School while playing for head coach Jonathan Ray, leading the pitching staff from her freshman year until graduation.

“I loved playing at Poplarville for Coach Ray,” Kirkland said. “He was like a father figure to us. He cared about us not only as players but also as people. Being able to play for him made a huge impact on my life.”

At the conclusion of her prep career, she signed to continue her softball career at The University of Southern Mississippi.

Kirkland spent one semester at Southern Miss and decided that the game was no longer the game that she had grown up loving, opting to transfer from the program.

“I wanted to quit playing softball altogether,” she said. “It kind of left a bad taste in my mouth for softball. I even changed my major from coaching because I didn’t want anything to do with it.”

Kirkland decided to transfer to Pearl River, but not to play softball. She was instead hoping to pursue nursing school, but that’s when former PRCC head coach Leigh White stepped in.

“I was registering for classes at PRCC because it was going to be cheaper since I didn’t have an athletic scholarship,” Kirkland said. “Coach White saw me and asked me to come to her office to talk with her. She talked me into giving softball one more chance. If it wasn’t for Coach White, I would have completely quit playing.”

“We had caught wind that she was on campus registering for classes,” White said. “I went over there and was thinking if we could get her into our office that we had a shot to get her on the team. She was done with softball at the time and it wasn’t fun anymore. Our conversation that day led into her deciding to give it a shot. We were so glad that she did. I think the good Lord sent her back to us for a reason. I was just proud to be a small part of being able to coach her and watching her grow.”

The decision to give the sport one more chance and play for her hometown school soon appeared to be a great decision. Kirkland became an All-MACJC and All-Region 23 performer, finishing her 2014 freshman season with a 21-10 record and 2.53 ERA. She set the school record for strikeouts in a season with 120.

“That first season, I remember rekindling my love for the sport,” she said. “I really wanted to give up on it, but I realized at Pearl River that it felt like the way that it should feel. It was so much more relaxed. It was a lot of fun again. Pitching was fun again.”

Kirkland came right back in 2015 with another outstanding season. Although she was 11-12 as a sophomore, she broke her own strikeout record, tallying 153. She also improved her ERA to 2.34. She was again named All-MACJC and All-Region 23 for her season.

“Wow, I really didn’t realize that I had so many strikeouts,” Kirkland said when her stats were read back to her. “During that season, we were playing for Coach White. She was going through her second round of cancer treatments. That pulled all of us players together and we really had something to play for that season.”

Kirkland talked about her decision to return to the sport and the decision to play at Pearl River.

“It was a dream of mine to play at Pearl River, but every player chases that Division I dream, which is why I chose Southern Miss,” she said. “I think that it was also important to find the best fit for me and not just look at the size of the school. I chased that dream to get out of Poplarville and that wasn’t where God wanted me to be. I think that he put coach White in my life and led me to Pearl River. I ended up wishing that I had gone there straight out of high school.”

Kirkland loved that she was able to play near friends and family.

“It mattered a lot to me to see the people that grew up watching me play get to continue to watch me play,” she said. “One of the biggest things that came to my mind when choosing a college was picking somewhere my grandfather would be able to watch me play. It was awesome being right there in Poplarville where he was 10 minutes away.”

White talked about Kirkland being honored by PRCC.

“She’s very deserving of the honor to be in the Hall of Fame,” she said. “Rachel was a leader on and off the field. She is definitely one of the best pitchers to come through the program and she’s incredibly deserving of the recognition.”

After her time as a Wildcat ended, Kirkland signed a scholarship to play at William Carey University, where she continued to shine.

Upon graduation, she returned to Poplarville High School as an assistant coach for a few seasons and is now a full-time stay-at-home mom.

“After leaving PRCC, I changed my major back to education and coaching. I even got my masters in school counseling,” she said. “Right now, I am a stay-at-home mom, but if I go back to work, I definitely hope to be coaching and teaching again. I love coaching, and over the past few years, I’ve continued to give pitching lessons in Wiggins. I fell in love with coaching and it’s something I can see myself doing in the future when my kids are older.”