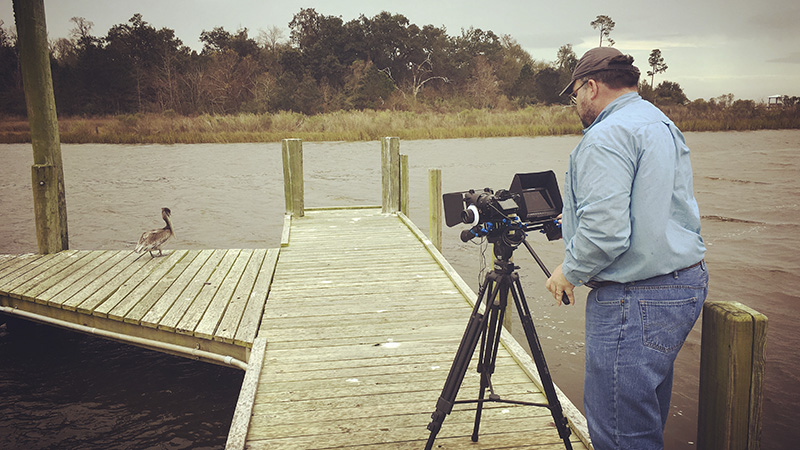 Carriere resident and artist Anthony Thaxton received 4 Emmy nominations for, “Walter Anderson: The Extraordinary Life and Art of the Islander,” a documentary he produced and an accompanying book about Mississippi painter and writer Walter Inglis Anderson.

Thaxton grew up in Pearl River County, attending Pearl River Central High School where his father was PRC’s head football coach for three decades. Thaxton attended PRC until he transferred to a math and science school the last two years of high school. His production career began while attending PRC when he helped film football games and create player highlight videos. At one point, Thaxton and his brother made a film called the ‘Odd Father’, a parody of the ‘Godfather’. Thaxton was 16 and his brother was 14 at the time.

Thaxton became fond of Anderson very early, he used to read Anderson’s books at the Margaret Reed Crosby Memorial Library or check out his books and read them on his father’s shrimp boat. Thaxton always carried “The Horn Island logs of Walter Inglis Anderson” book with him be he related to it.

“I’d use to check out those books take them on the shrimp boat never knowing I would doing my own book and film on Anderson years later, which is really, really cool,” said Thaxton. “Walter was always very special to me.”

In 2019, the making of the documentary began. It tells the story of the American painter from Mississippi, narrated by Anderson’s family and children.

“The Anderson family was excited because I’m an artist and they loved the idea of an artist telling their father’s story,” said Thaxton.

The documentary aired last November on Mississippi Public Broadcasting television, but received such a good response that this fall Thaxton’s documentary will air nationwide on PBS stations. The book sold 5,000 copies in independent stores. For 19 weeks it was on the Mississippi reader’s best seller list and number one for four weeks. A second printing of the book will be out this August.

“We could not be more excited for this Mississippi treasure to get out there on a much larger scale. We’re proud of the film and how it turned out. He’s just a really enigmatic, really interesting character, but his artwork and the variety, though prints, watercolors, murals, carvings, he just did everything and was so good at it. It’s just a fascinating story,” said Thaxton. “We’re proud of him and now we’re proud the word is going to get out on a larger scale.”

‘That’s a cool treat to be nominated for an Emmy with my son,” said Thaxton.

The awards ceremony will be held Friday, June 17 in Atlanta. Thaxton feels they have a good chance of coming home with something.

From start to finish, the process of creating “The Extraordinary Life and Art of the Islander”, was “overwhelming” to Thaxton because the topic was so personal. One of his fears while making the documentary was how it would resonate with the audience. After the documentary aired, Thaxton said people commented via social media how it was an eye opening film that changed their perspective on Anderson and helped them realize he wasn’t just a crazy artist on the coast.

That kind of reaction was rewarding to Thaxton, because “The Extraordinary Life and Art of the Islander,” was a way he could recast Anderson’s story. The book also includes extensive stories from Anderson’s family.

Thaxton said he appreciates the people who supported and encouraged him, allowing him to become comfortable to create fun projects that have gained a lot of attention. He also wants to thank the congregation at Union Baptist Church for the encouragement, the Ceaser community and the PRC football team. Those highlight videos were some of the Thaxton’s first work, and led to him being able to do what he’s doing today.

“So I’m very thankful for where I’m from and that area just holds a very special place in my heart, said Thaxton.

Next, Thaxton and his crew are working on a major documentary on Eudora Wealthy, a writer from Jackson Miss. Thaxon said the film is shaping up to be big deal.