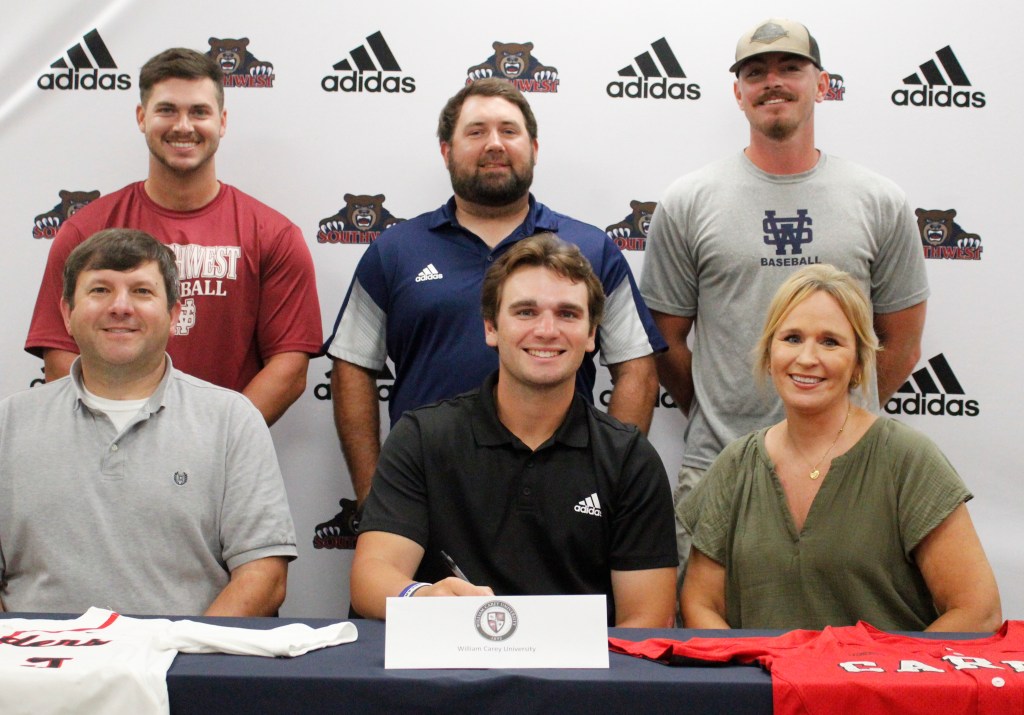 It may have been for only a year but Brady Wilson made the most of his time with the Bear Baseball program. Now the Parklane-alum will get the chance to continue his run after signing on with William Carey University.

“It’s been a long time coming,” he said. “This is something that I dreamed of doing since I can pick up a bat, playing at a four-year school. I’m just completely blessed to be able to pursue that dream. I thank the Lord, my friends, family and all of my coaches that have gotten me here.”

From an early age, Wilson has been around the game and honed his skills not only in the field but at the plate. During the 2022 season, Wilson played multiple positions well including at first base and left field. But what arguably stood out more was his success at the plate, hitting .289 for the year with four home runs, nine doubles and team highs in RBIs (27), walks (34) and on-base percentage (.463).

Wilson said that he chose to sign with the Crusaders over offers from Belhaven, John Melvin, Blue Mountain and Southeastern Baptist.

“It is a winning program,” he said. “It is a good program with good coaches, good facilities and a good field. The town of Hattiesburg is a good town and it just feels like home.”

One aspect that may make the move to the four-year level easier for Wilson is familiarity. He will continue to play alongside fellow Southwest Bear Braydon Coffey, someone who he has played ball with dating back to their days together at Parklane.

“(Braydon) Coffey is probably one of my best friends and we’ve played together since we were probably 12 years old,” Wilson said. “I’m happy to get the chance to play with him again.”

In addition to his familiarity with former Parklane teammates in Bradley Whitaker, Taylor Alford, Coffey and Braxton Cooksey, Wilson is also thankful for playing with a group of guys that helped push him along. He wanted to shine some light on his teammates, especially a pair of players that he grew close to.

“I love this team,” he said. “I want to give a shout out to Braiden Jones and Brady Tynes, they are guys that I was personally closest with. They are guys that really pushed me to be better not only for myself but also for them a little bit.”

Wilson said that when he gets to Carey, he wants to continue to study Biology with hopes of one day being a physical therapist, following in the footsteps of his father Brad.

Southwest coach Jack Edmonson added that looking back on the past year, he was thankful to have a player like Wilson on the team.

“We are grateful to have him here at Southwest and at home,” he said. “He grew and he made our team better and made our program better and helped us get going in the right direction.”