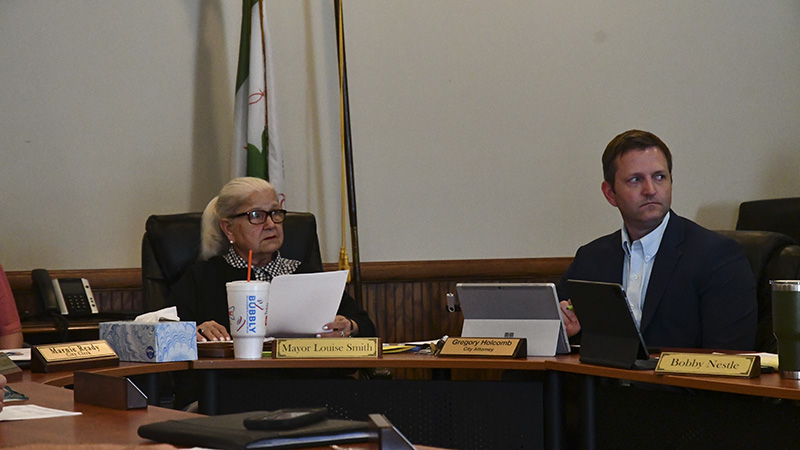 Poplarville’s Board of Aldermen met this Tuesday to discuses the radio tower at City Lake and heard an update on the post office repairs and water leak at Bill Watson Park.

The radio tower was built in 2004 and was once used by the Poplarville School District’s school bus drivers for communication, but is no longer in use and has no use in the future. Police Chief Daniel Collier recently visited the tower to inspect its left over equipment. He found two working but outdated repeaters, one of which he plans to make use of at his department and the other will be used by the fire department. Mayor Louise Smith asked the Board if the city should to sell the tower. Public Works Superintendent Sam Hale says the tower has more worth today, especially since there is an old generator inside the tower. In 2004 the tower was worth an estimated $17,000. Board members Bobby Nestle and Anne Gendusa Smith believe the city should advertise for bids on the equipment, and the rest of the Board seemed to agree. No motion was made to that effect, but city attorney Gregory P. Holcomb was asked to conduct some research and gather specifics on how to sell the tower.

Mayor Louise Smith has been of top of finding a solution to the post office that remains closed due to the roof collapsing on Jan. 2, 2022. She sent letters to Senator Cindy Hyde-Smith, U.S Senator Roger Wicker and U.S. Congressman Steven Palazzo regarding the need for action to repair the post office. Hyde-Smith was the only one to respond. Smith said it was suggested to her that she write to a higher level of authority.

Mayor Louise Smith and Alderwoman Anne Smith said the city found the deed to the post office and determined it was eligible to be historic registry but was never presented.

The Board approved a motion for Mayor Smith to send more letters to other politicians. The Board has yet to receive concrete information about the post office, but it is possible the U.S Postal Service will be looking for an alternative location for the post office.

The Board also discussed a water leak at Bill Watson Park. Smith spoke with Pearl River County Administrator Adrian Lumpkin on Tuesday, who said county crews conducted to repairs to what they thought was one leak but it is still leaking. Lumpkin told Smith that the county will determine what’s causing the leak.

The Board was also informed by Police Chief Daniel Collier that two cameras have been installed at City Park, and they are now operational.

In other business, the Board approved: