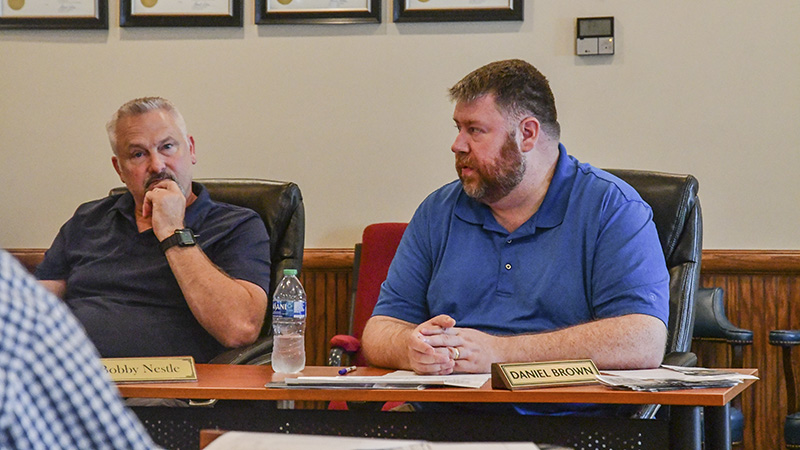 Alderman Daniel Brown, at right, talks about the water leak at the Bill Watson Ball Park during Tuesday’s Poplarville Board of Alderman meeting, while Alderman Bobby Nestle listens on. Photo by David Thornton Jr.

During Tuesday’s Poplarville Board of Aldermen meeting, the Board approved the amended golf cart ordinances and accepted a justice assistance grant for the Police Department.

After approving the amended golf cart ordinances, the Board approved Mayor Louise Smith to sign a contract with RJ Young to provide service equipment and software at the new location of the Police Department. The contract is for 60 months at $185.47 per month. The department was also awarded a grant through the justice assistance to provide four laptop computers.

Mayor Smith also updated the Board on the status of the post office in Poplarville. The post office continues to be out of commission after the roof collapsed back in February. Smith’s only update was that she spoke with representatives from Senator Cindy Hyde-Smith’s office and Senator Roger Wicker’s office.

“Basically they just wanted to know about our story again and I gave it to them and they said they would work on it. That’s where we are now, we just don’t have anything concrete and we’re not getting any response from the post office so I will continue to be in contact with them and continue to write letters,” said Smith.

Smith then gave an update about water leak at Bill Watson Ball Park. She spoke with County Administrator Adrain Lumpkin the day of the Board meeting and he said the leak has been fixed. This led the Board to discuss applying for recreational grants.

Next, Alderwoman Anne Gendusa Smith led a discussion about sidewalk damage at 404 North Street. This area and several others are targeted as hotspots the Board wants to fix. They already voted on April 5 to go out for bids to have the sidewalk damage repaired. But, the Board is still awaiting the status of the bids from city engineer Jason Lamb and will push to have them as soon as possible.

Poplarville resident Deebra Franks voiced her opinion regarding the sidewalks. She reiterated the Board’s concerns about how dangerous the North Street area is. Franks said the hole is gigantic and described it as being about 2-3 feet wide and 3-4 feet deep. She said her husband has fallen into it once and there was a second time where could have fallen into oncoming traffic. She also witnessed a wheelchair bound resident struggle to move onto the road and maneuver around that hole.

“A man with a wheelchair, he had no access to go across, they have to go onto Main Street and I don’t know if you all are aware but people come flying down Main Street like 60 mph or plus,” said Franks.

So far, the hole has been there for two years and Alderman Bobby Nestle reassured Franks that the Board is awaiting bids to fix the problem.

During the departmental reports, the Board heard that Public Works Department employees covered a big hole on Maxwell Street. The Board approved a motion for the Fire Department to use a $500,000 grant to purchase a fire truck for $484,774. The Police Department moved into its new building and Chief of Police Daniel Collier said everything is up and running for the most part.

In other business, the Board approved the claims docket in the amount of $78,663.  The Board also acknowledged the minutes of the Planning Commission from March and April.