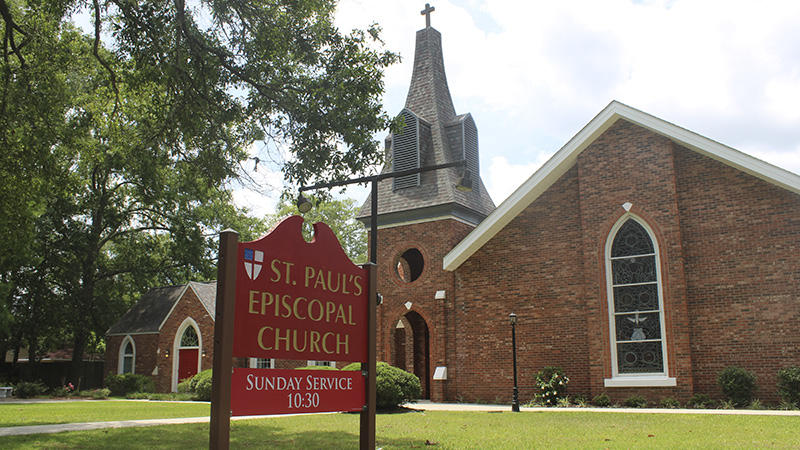 St. Paul’s Episcopal will serve as a temporary home for the congregation of St. James AME Church while repairs are conducted. Photo by David Thornton Jr.

While repairs are being conducted to St. James AME Church of Picayune, St. Paul’s Episcopal Church has opened its door to share that facility.

This shared arrangement will begin on June 5. St Paul’s Holy Eucharist mass will begin at 10 a.m. and St James’ worship service will begin at 11:30 a.m.  A shared coffee and fellowship time will bring the two congregations together at 11 a.m. in the parish hall.

“The foundation is having some cracking issues and is sinking.”

Johnson estimates the church will be fully repaired in the next 2-3 months. During that time St. Paul and the St. James will worship under one roof.

Father Johnson of St. Paul’s Episcopal Church said the arrangements are, “Open ended, it really depends on what their needs are in terms of their new building… we’re more than happy to spend as much time with them as we can.”

The two congregations won’t technically worship together, but Father Johnson believes he and Pastor Johnson will have a good working relationship.

“Maybe several community events, a community picnic, or even in this time of COVID, maybe a COVID event,” said Pastor Johnson.

This working relationship will also allow both churches to remain involved in the community and show that two dominations in the state of Mississippi can work together and accomplish goals.

“So hopefully it can be something that would have a good report with other churches in other communities,” Johnson said.

Father Johnson called the merging of the churches an act of the Holly Spirit.

“This is not something anyone planned, it just emerged and that’s usually the things we consider an act of the Holly Spirit. Particularly since we were having a meeting where we were saying we wanted to listen to the spirit to tell us what we could do or needed to do to renew our church. And then these other folks showed up who had the same kind of perspective and needs and just by being together we enlivened each other,” he said.