The Blue Devils take round two 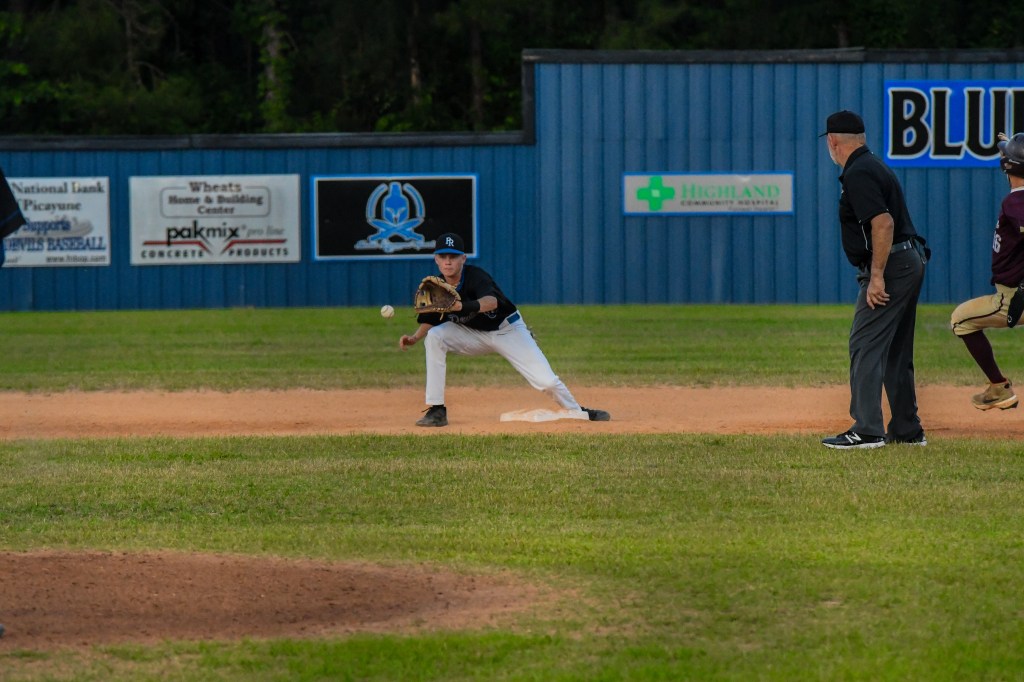 Jared Dickens catches the ball and tags out Rebels runner at second base during the Blue Devils 2-1 second round 5A playoff win Monday night.

After being down 1-0 in the series against the George County Rebels, the Pearl River Central Blue Devils won two in a row to advance in the 5A state playoffs.
In game one, the Blue Devils lost, 3-2. Game two was a 7-3 win and game three was a thrilling 2-1 win.
Head baseball Coach Neil Walther confidently commended his Blue Devils for competing even when the team was down in the series, and in the score.
“They’re not afraid of a game three, I think we’re 13-1 in game threes now, so we enjoy the game threes,” said Walther.
“I felt like they competed the whole time, even game one we were losing 3-0 and we had nothing going, we still battled back. We were still in a run, still had a guy on base at the end of the game, so they competed until the last out and that’s what they’ll have to continue to do that. The clock doesn’t run out in this one, you still have to get the 21 outs,” said Walther.
Game three was played at PRC, and both teams were tied at 1-1 after one inning. The Rebels scored on an RBI double. The Blue Devils scored when Caleb Dyess attempted a second base steal and forced the Rebels pitcher to throw a wild pitch, that allowed Jared Dickens to steal home.
From then to the fifth inning the game was tight. Defense was a wall and the Blue Devils competed to keep the score tied.
At the bottom of the fifth the Blue Devils took the lead after a Hunter Brunson single RBI. They held on to that lead to take the series.
Game Stats: 30 total team PA with 26 AB. Brunson with the lone one RBI. Dyes and Dickens scored the team’s two runs. Justin Robinson pitched the entire game, had 10 strikeouts and 2 BBs.
As the team advances to the third round against the Vancleave Bulldogs, Walther feels the Blue Devils can keep up with any team in the bracket. The three goals this week will be focus, maintaining a competitive spirit and being aggressive at bats. If they remain focused, and realize that every pitch matters, “we’ll be pretty tough to beat,” said Walther.
“We’ve got some talented kids, they just got to stay within themselves… if they stick within that approach, and the pitchers stick with a plan, then I think we’re going to be okay,” he said.
The Bulldogs hold two division 1 pitchers on their side, so Walther doesn’t think the Blue Devils can play passively.
“I don’t think we can be patient and let it come to us, I think we’re going to have to be aggressive and just go after it… we’re going to try and get him (Bulldogs pitchers) out of the game by hitting the ball rather than taking pitches,” said Walther.
Game one of round three will start in PRC this Friday at 7 p.m.
Game two will fall on Saturday at Vancleave and if necessary game three will be back in PRC.