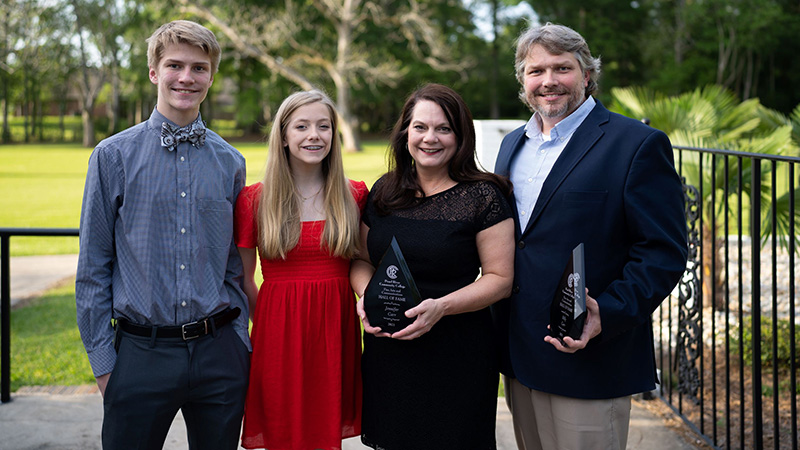 POPLARVILLE, Miss. — Three former Pearl River Community College students were recently inducted into the Fine Arts Hall of Fame immediately before the final concert of the school year. At last Thursday’s concert in the Ethel Brownstone Center for the Arts, performances alternated between The Voices a capella arrangements under the direction of Dr. LaDona Tyson and the lively music of the JazzCats under the direction of Mike Bass.

Prior to the concert, inductees Billy and Jennifer Kilpatrick Carr attended an intimate reception with their children at the Alumni House. The third inductee, Ancel Ray Patten, Jr., died in 2020 and was honored posthumously. His award was presented to his widow, Jerri Patten, earlier in the school year.

“For many years, the Fine Arts & Communication Department at PRCC has been recognized as one of the premiere departments in the state of Mississippi,” said Dr. Trevor Hunt, department chair and director of the Brownstone Center. “The success we have enjoyed is due to the contributions by outstanding students, faculty, and members of the community who have shown endless support over the years. The Hall of Fame serves as our opportunity to honor those who have helped build and shape this department into what it is today. It is a privilege to induct our new members.”

Biographical information about each honoree was given again at the start of the evening’s concert with images placed on the screens flanking the stage.

Billy Carr graduated from Purvis High School in 1996. He attended PRCC where he was a member of RiverRoad, The Pearl River Singers, and the Baptist Student Union. Since graduating, he has worked in the commercial construction industry.

He is currently a Senior Project Manager/Estimator for Hanco Construction in Hattiesburg. Billy has been able to use his knowledge of performing arts and construction to engineer and build the sets for Spark, Petal Middle School’s award winning show choir. In 2020 he was elected Parent of the Year at Petal Middle School.

Jennifer Kilpatrick Carr graduated from Petal High School in 1995. As a student at PRCC, she was a member of RiverRoad, The Voices, and The Pearl River Singers. She was also a Student Government Representative and a member of Phi Theta Kappa. Following PRCC she attended the University of Southern Mississippi, earning her bachelor’s degree in Elementary Education.

She began her teaching career in Lamar County and spent thirteen years in the classroom teaching mostly middle school math. She started a show choir group at Baxterville School and enjoyed sharing her love of performing with other students. Jennifer earned her Masters Degree in Educational Leadership from the University of Southern Mississippi in 2012. She is currently serving as the Assistant Principal of Petal Elementary School.

The Carrs met during their time together in RiverRoad and are thankful for the opportunities and experiences they were provided by PRCC. They are members of Asbury Church and enjoy serving together on the Asbury Praise Team. They live in Petal with their two children, Nate and Audrey Kate, who are students at Petal High School and members of the Petal High show choirs.

“We are extremely proud and honored to be a part of this,” they said. “Our teachers here were instrumental in our lives. Dr. Malone played at our wedding and continues to be a special person in our lives.”

Ancel Ray Patten, Jr. spent his boyhood years in Rolling Fork, where his father was the band director. He began playing in his father’s band in the second grade, learning to play whatever instrument his father needed in the band. Eventually he settled on the euphonium, and he became one of the best players in the country. His family moved to Mississippi when his father Ray Patten took the position of Band Director and Chairman of the Fine Arts Department at PRCC.

After moving to Poplarville, he was selected to be in the Lion’s Club all-state band all four summers in high school. He went on to graduate from Pearl River Jr. College in 1970 and from the University of Southern Mississippi in 1972, where he was president for a time of the Golden Eagles Marching band.

Patten spent four years as a bandsman in the U.S. Air Force and found himself playing many funerals at Arlington National Cemetery during the Vietnam war as well as various ceremonies at the White House. He then spent a year as the band director at Purvis High School before answering the call to ministry and attending seminary.

After graduation, he was called to a small rural community, where he served as pastor of the Boistfort Community Church for almost 20 years. During this time, he wrote and directed children’s musicals at the church and used his lunch hour to volunteer as the band director at the small K – 8 school in the community. He loved to get students started on their instruments and made it possible for many of them to continue in the high school band when they transferred into town.

In 1999, Patten left the ministry to return to being a full-time music teacher teaching everything from elementary school music to choirs and high school bands. His favorite position was as the elementary school music teacher in a school with less privileged kids. He had a sacred calling to love those students and give them a good foundation in music.

When he could no longer teach due to his illness, he would take his whistles and flutes down to the hospital and play for the patients who had to spend hours getting chemo and dialysis treatments. He would often play their requested songs and then just sit with them to help pass the time.

“Buddy always had a song in his heart. He found various wind symphonies to perform with throughout the years,” Jerri Patten said. “At his memorial service, one colleague described his playing as like listening to ‘melting chocolate.’ He could always be heard whistling as he worked.

“PRCC will always hold a place of high regard in our family. The award that Buddy has received will always mean a great deal to us all.”

JAZZCATS AND THE VOICES CONCERT

This final concert was full of lively music to bring the 2021-2022 season for the Brownstone to a close. For each piece played, soloists were recognized with many in the audience showering them with vibrant applause.