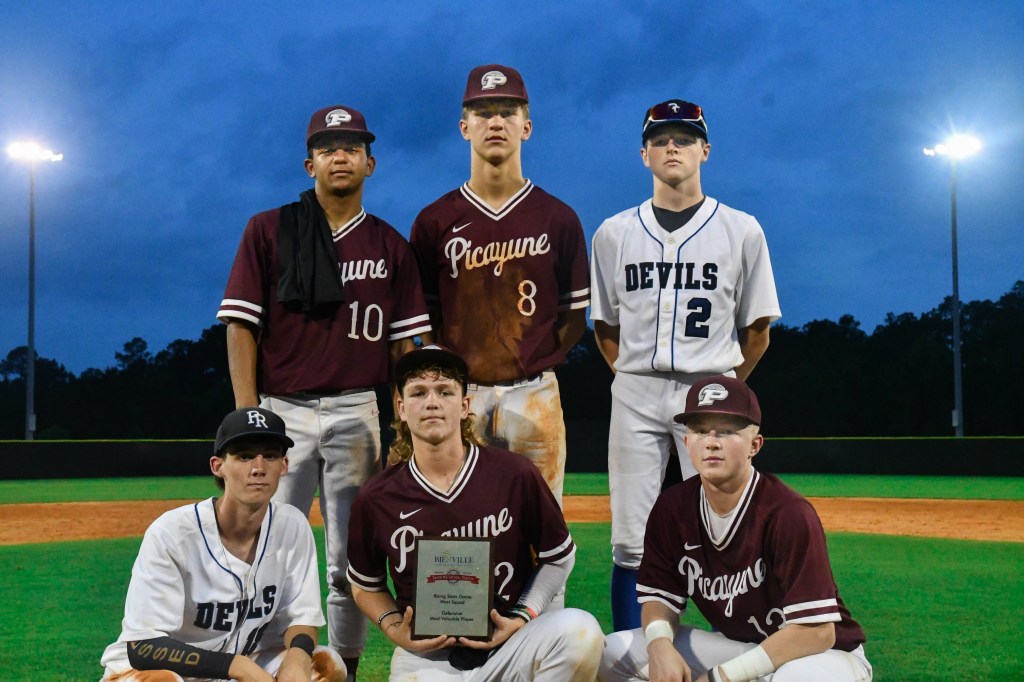 In the back row from left are Kyler King, Tanner Busby and Jacob Johnson. Kneeling from left are Chris Hart, Morgan Craft, and Jamie Lumpkin after playing in Monday’s Rising Stars All-Star Game at West Harrison High school.

Each one of these star studded young men put up great numbers this season, reaching individual accolades and playing leading roles in their respective schools reaching the 5A state playoffs.

Pearl River Central’s duo of Hart and Johnson helped their team complete a 23-12 season with an added district championship title. The Blue Devils reached the third round of the state playoffs this season.

The Picayune Maroon Tide foursome in King, Busby, Lumpkin and Craft helped their team earn a 14-17 season and a second round appearance in the state playoffs. King and Busby were also recognized as first team all district players along with pitcher Brady Robertson.

On Monday night the 36 rising athletes were split into two teams East vs. West. All six Pearl River County players were on the West team. The ending score was a one sided affair, with the East team winning 7-1. There were still some good plays by PRC’s rising stars. Busby led off as pitcher, racking up one strike out. King scooped up a ground ball, touched second base and made the throw to first for a single man double play. Craft had an incredible first base catch, showing his flexibility by splitting out to catch a ball. Lumpkin made a ground ball play to first. Deeper into the game, Lumpkin connected at bat and doubled to second base. Hart also got on base one time and Johnson pitched in the third inning with two strikeouts.

At the end of the game both East and West teams were awarded offensive and defensive MYP’s and Craft won defensive MVP of the game.

Hart and Johnson said all the players were having fun and making connections in the dugout in what Hart said felt like a back-yard baseball game.

“It really felt the past years and year and a half have paid off,” he said.

Johnson said it was fun playing with different players and making connections with other sophomore talent. Hart said it was a different experience getting to be in the dugout with the best sophomores in Mississippi.

These two players want to lead the Blue Devils to a state championship next season and believe they have to potential to do so.

Maroon Tide’s Lumpkin said it was awesome to be named a rising star after thinking he’d be left off of the list.

For King this game was top notch.

“It was an awesome experience that not many players get to have, so just coming out here with a whole bunch of other dudes who are like us and being able to play ball as one is a great feeling,” said King.

Busby said the rising star recognition was great, and he had a lot of fun tonight.

Morgan said this is something he works all year for.

“It’s always a great opportunity… when you get invited to something like this it’s always a good time in your life and something you’ll always remember.”

Busby said the experience also gave him a peek into the upcoming season next year.

“It was cool seeing who we’re going to be playing up against next year,” he said.

The Picayune foursome said they will strive to get better during the off season, and make a run for a 2023 championship.

“Off season, I will grind as hard as I can and get better as a team and win a state championship next year, no matter what is in our way,” said Lumpkin.

All six have aspirations to play college baseball after high school.

West Harrison will also host a juniors All-Star Game that will feature Blue Devils outfielder Caleb Dyess. That game will be held Wednesday at 6 p.m.