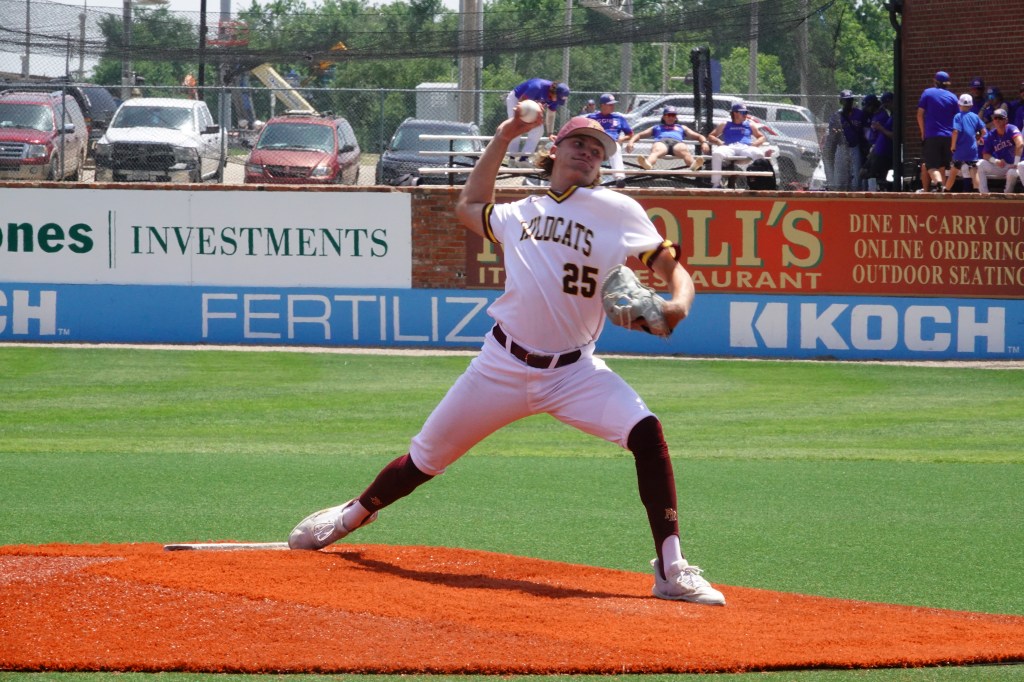 ENID, Okla. — The No. 1 Pearl River baseball team was firing on all cylinders in its NJCAA DII World Series opener against No. 8 Florida State College Jacksonville. The Wildcats were the recipient of an incredible pitching performance by Dakota Lee (Purvis) and three homers en route to the 10-2 run-rule victory.

“What more could you ask for from Dakota Lee?” head coach Michael Avalon said. “The start that he gave us was phenomenal. He made some tough pitches and worked out of some tough situations. I told him how much I appreciated him. When he came out of the game after throwing 100 pitches, he said thanks for trusting me, coach.”

Lee set the tone for Pearl River (41-10 overall) right from the opening pitch as the right-hander made quick work of the Florida State College Jacksonville (31-20) batters to send the Wildcats up to the plate.

John Griffin Bell (Mobile, Ala.; Faith Academy) wasted no time getting PRCC on the board, crushing a 1-2 pitch deep over the left field wall for a leadoff homer. The momentum boost carried over as Gabe Broadus (Wilmer, Ala.; Faith Academy) drew a walk before Tate Parker (Gulfport; West Harrison) stepped to the dish and blasted a two-run homer over the left field wall for a 3-0 PRCC lead. The long ball was Parker’s 17th of the year.

The Blue Wave cut the deficit to 3-1 in the top of the second with an RBI single.

Broadus turned in arguably the catch of the year in the top of the third inning. With a runner in scoring position at second base, the left fielder sprinted to his right before leaving his feet to make an incredible catch and put an end to the inning.

PRCC struck again in the fourth inning of the day, pushing across four runs to stretch the lead out to 7-1. Matt Mercer(Richton; Petal) reached base on an error to open the inning and Logan Walters (Petal) was hit by a pitch immediately after. Bell then laced a ball into left field to bring Mercer home. Broadus followed him by singling into center field to drive in another run. Parker collected an RBI by grounding into a fielder’s choice and an Alex Perry (McComb; North Pike) single between the third baseman and shortstop plated the last run of the inning.

Broadus turned in another remarkable catch in the top of the fifth inning, mimicking his earlier catch almost identically to prevent a run from scoring.

FSCJ scored a run in the sixth on a sacrifice fly to make it a 7-2 ballgame. The Blue Wave continued to threaten in the inning but a pair of huge punchouts from Lee ended the inning.

Pearl River took a 10-2 lead in the bottom of the sixth inning. Parker led things off with a double and Ian Montz(Lafayette, La.; Acadiana) was plunked by a pitch. One batter later, Mercer stepped to the plate and demolished a three-run homer over the left field wall.

Blake Hooks (Petal) entered to close out the game in the top of the seventh and threw a quick three up, three down inning to give PRCC a 10-2 run-rule victory.

Lee was incredible throughout the duration of his outing. The Southeastern Louisiana signee threw six innings, scattering five hits, two runs and one walk while striking out six batters.

“It didn’t start off good, but I got better as I went along,” Lee said. “I had great support from the guys behind me. J.G. and Tate got us off to a hot start and that made it easier for me. I’m just glad to get this win.”

Hooks threw an inning, allowing no hits and no runs.

The Wildcats return to action tomorrow at 7:15 p.m. in a winner’s bracket matchup with No. 5 seed Lansing.