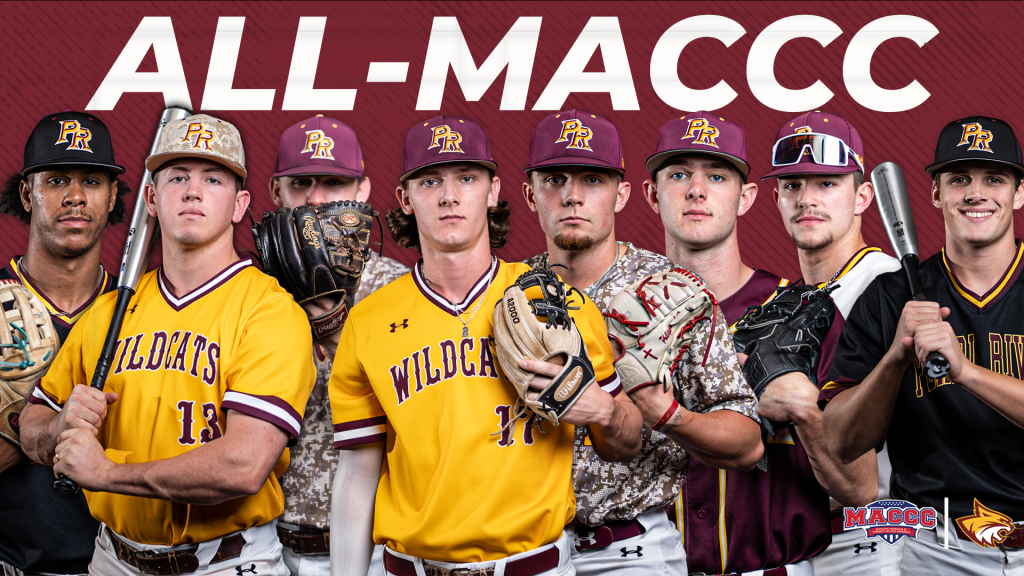 POPLARVILLE, Miss. — The post-season honors have started to roll in, and the No. 1 Pearl River baseball team earned a remarkable nine Mississippi Association of Community Colleges Conference awards.

COACH OF THE YEAR

Avalon led the Wildcats to a 40-10 overall record, including a 22-6 mark in conference play. The Wildcats clinched the MACCC Championship for the second year in a row and earned an NJCAA DII World Series appearance by winning the Region 23 Tournament.

“This honor to me means that we had a lot of really good players that won a lot of ball games,” he said. “I’m just really thankful to have been a part of it.”

“Tate Parker had another outstanding year for us,” Avalon said. “Statistically, he led nearly every category in the conference and to do that in back-to-back years is impressive. Over the past two years, there has been no doubt that he is the best player in our conference. He was the conference triple crown winner for the second year. Doing that once was incredible but doing it again when the bullseye was on him was almost impossible.”

Broadus filled a number of roles for the Wildcats this season. He spent most of his time in left field but also played shortstop and had a few appearances at second base. He currently holds a .386 batting average with 76 hits, 56 runs, 36 RBIs, 37 stolen bases, 27 walks, nine doubles, three homers and one triple. His 37 stolen bases were number one in the MACCC.

“Gabe was our catalyst at the top of the lineup,” Avalon said. “We were near the top in most offensive categories. Gabe had a lot to do with that by setting the tone early every game for us.”

Perry has been a staple in the middle of the Wildcat lineup this season. He is hitting .366 with 61 runs, 59 hits, 51 RBIs, 32 walks, 21 stolen bases, 15 homers, six doubles and one triple. His 15 homers placed him second in the conference.

“Since day one on campus, Alex Perry has continued to get better and better,” Avalon said. “His numbers continue to improve throughout the year and into the postseason. He protected Tate Parker in the lineup day in and day out.”

Donaldson has been a valuable offensive and defensive weapon this season. He currently carries a .336 batting average, a .474 on-base percentage and a .534 slugging percentage. The first baseman has tallied 49 hits, 44 runs, 43 RBIs, 25 walks, 11 doubles, six homers and four stolen bases.

“Like his brother (Former Wildcat Standout Kasey Donaldson), D.K. is just a hitter,” Avalon said. They always find a way to hit. The most impressive thing about D.K. this season has been his ability to get the big hit when we needed it. D.K. meant a lot to us defensively and he did an incredible job at first base. He made our team better.”

Montz recovered from a slow start to finish the regular season as one of the most dangerous hitters in the Pearl River lineup. Heading into Sunday’s World Series game, he is hitting .311 with 46 RBIs, 46 runs, 46 hits, 31 walks, 20 stolen bases, 12 home runs, eight doubles and two triples.

“Ian’s consistency got better as the year went on,” Avalon said. “He became a true impact player for us and a threat in the middle of our lineup. He has continued to mature throughout the year. Ian made several game-saving plays for us in the outfield and made a big impact there as well.

Swistak proved to be the ace of the Wildcat rotation during the regular season. Across 54 2/3 innings pitched, he holds a 3.95 ERA, 53 strikeouts and just 10 walks.

“Turner picked up where he left off last year,” Avalon said. “He bolstered our pitching staff and rotation. He threw a lot of big innings and big games for us this year.”

Tolbert has been an impactful bullpen arm for the Wildcats this season, pitching some very important innings. In 36 innings pitched, he holds a 2.50 ERA with 45 strikeouts. He’s saved three games.

“Cole Tolbert was a force for us out of the bullpen this year,” Avalon said. “He made a couple of key starts for us. He’s an electric arm that we used to finish games.”

Moore played an important role in the Wildcat rotation this year. He enters Sunday’s matchup with a 6-2 record after 44 innings pitched. He has a 3.68 ERA and 40 strikeouts.

“With all of the adversity that Leif dealt with this year, it’s incredible the numbers that he put up and the starts that he made for us,” Avalon said. “I’m very proud of his toughness and I’m extremely happy for this award for him.”

The Wildcats return to action Sunday at 1 p.m. PRCC will take on the winner of Florida State Jacksonville and Phoenix College.

All games will be livestreamed at NJCAATV.com for a fee. A day pass is $10, and a tournament pass is $25.