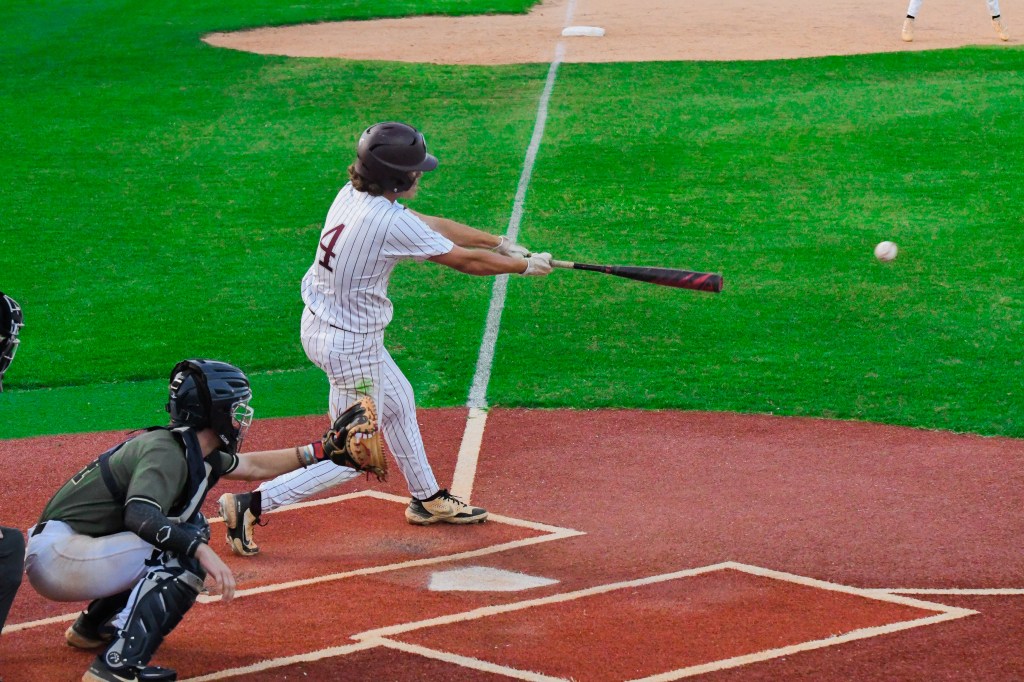 Dawson Underwood connects with the ball for a single RBI against the the Braves during the Maroon Tide’s 9-3 game two win in the 5A state playoffs.

After trailing 1-0 in the series, the Picayune Maroon Tide pulled in a 9-3 win over the South Jones Braves in game two. But during game three, Picayune lost 8-7, ending the team’s long run into the playoffs.
“It was a tough one, we had an early lead, kind of thought some things were going in our direction… but the kids battled, they fought hard, they left it all out there, really all you could ask for,” said baseball Head Coach Evan Nichelson.
In the team’s game two win, the Maroon Tide led 5-2 after four innings. Runs came by a Dawson Underwood home-base steal, Tanner Busby sacrificed a fly ball for a score, Cooper Moreaux had a home-base steal, another single RBI was scored by Underwood and a single RBI was logged in by Kyler King.
That lead increased to 9-2 after the sixth inning thanks to King’s single RBI, Brady Robertson’s single RBI, then a line drive hit by Moreaux for the two run score. The Braves added one run to the score but the Maroon Tide closed out the seventh inning with good defense.
In the team’s game three loss, King had a two run triple, and Moreaux had one RBI, and one sacrificial fly ball. Morgan Craft had one RBI. Sam Landrum also had one RBI. Robertson pitched for four innings and allowed five runs then King pitched the remaining three innings.
Nichelson reflected on Maroon Tide’s season and accomplishments saying,
“Honesty I’m so proud of the way they bought in to what we do. We preach resilience and grit, battling every pitch and always being in the fight and they were, in both playoff series. I’m proud of the way they carried themselves, proud of the way they played, and it’s a big stepping stone for the program moving forward,” Nichelson said.
Compared to the previous season Nichelson say there have been big improvements, a lot of growth, maturity and evidence of the kids growth. Nichelson said it’s a big step forward for the future of the program.
Nichelson applauded his three Maroon Tide seniors; Trenton Watts, Dawson Underwood and Sam Landrum on their careers and leadership of the team.
“They did a great job leading this year, they left the program better than they found it, and that’s all you can ask for from your senior group. They’re going to be missed because they laid a good foundation for the future,” said Nichelson.
Looking into the 2023 season, the Maroon Tide staff will reassess things and put a lot of work in during the off-season to prepare for a championship run.