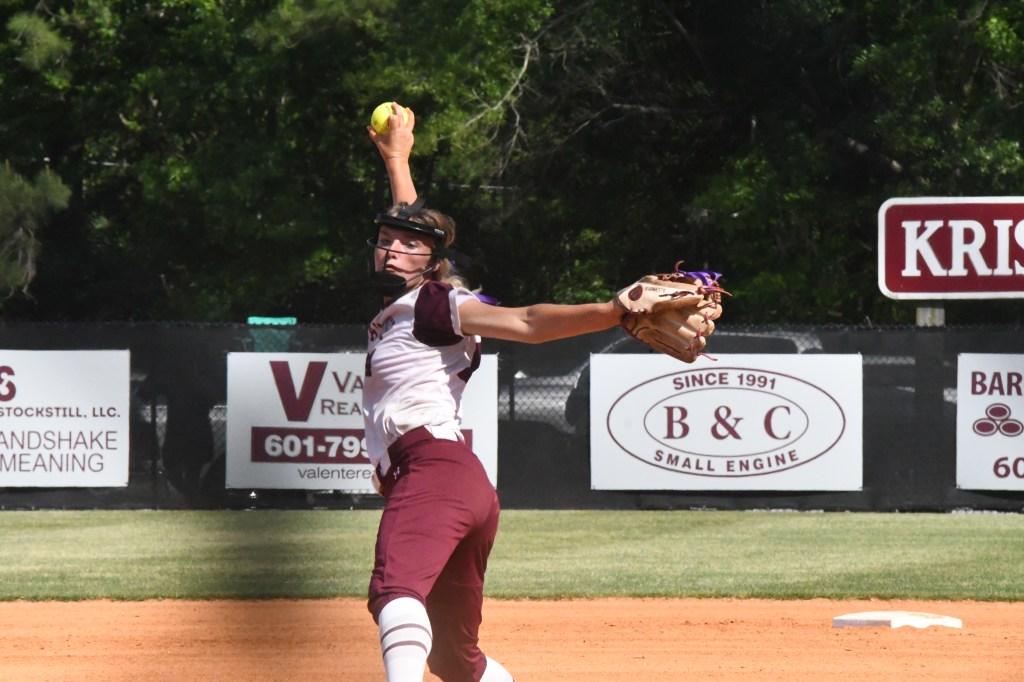 The Picayune Lady Maroon Tide softball team’s playoff run came to an end after losing back-to-back games to the East Central Hornets over the weekend.

Game two was played Saturday in Picayune. The Lady Maroon Tide had a very rough start to the game, allowing five runs in the first three innings, along with being scoreless until the bottom of the seventh inning. Picayune lost 7-1.

“I felt like we didn’t hit the ball very well today, they (East Central) went three innings and didn’t score and I felt like we could have taken advantage of that,” said softball Head Coach Courtney Dickens.

“Of course we had errors, but we didn’t make as many as we did last night (Friday) so we fixed a little bit of that. But we still had some errors that kind of hurt us and put a lot of runners on base and those runs ended up scoring. When you do that you have to hit the ball to make up for it, and we didn’t do it.”

The Hornets commanded hits at bat, logging in 11 over the Lady Maroon Tide’s four.

“East Central out hit us and I was a little disappointed in our defense this series because we’ve been playing good defense all year. I felt like going into this, the team that got the most hits was going to be the team to win and that’s really what happened.”

At the top of the first inning the Hornets scored right off the bat. After successfully getting their lead off batter on first base, their next batter hit for a single run triple. Down 1-0 Kylie Burnets struck out the next Hornets batter. Then the Hornets managed to get runners on first and third base. The Lady Maroon Tide then tagged a batter on first base, but that allowed a Hornets runner on third to take home. The Hornets capped off the inning with a single RBI for a 3-0 lead.

The Lady Maroon Tide offense saw no luck at the bottom of the inning as two batters struck out and another’s at bat hit was caught.

In innings two and three the Hornets scored single runs to lead 5-0. In innings 4, 5 and 6 the Lady Maroon Tide defense kept the Hornets scoreless through an all around defensive effort. They caught fly balls and made ground plays to the necessary bases. Unfortunately they couldn’t develop any runs on the offensive end.

At the top of the seventh Katie Hedgepeth caught back-to-back fly balls. With two outs the Hornets still managed to make back-to-back single RBIs for a 7-0 lead.

At the bottom of the inning, with bases loaded Hedgepeth hit the team’s lone single RBI for a more respectable 7-1 loss.

“I’m disappointed in the loss and I think my girls are too just because we’ve been working a long time to be where we are, but I’m not disappointed in our season,” said Dickens. “I have a lot of youth here and lots of girl coming back, I’m losing four seniors, they’re definitely going to be missed for sure. Big shoes to fill there, but I do have a lot coming back so I’m glad about that.”