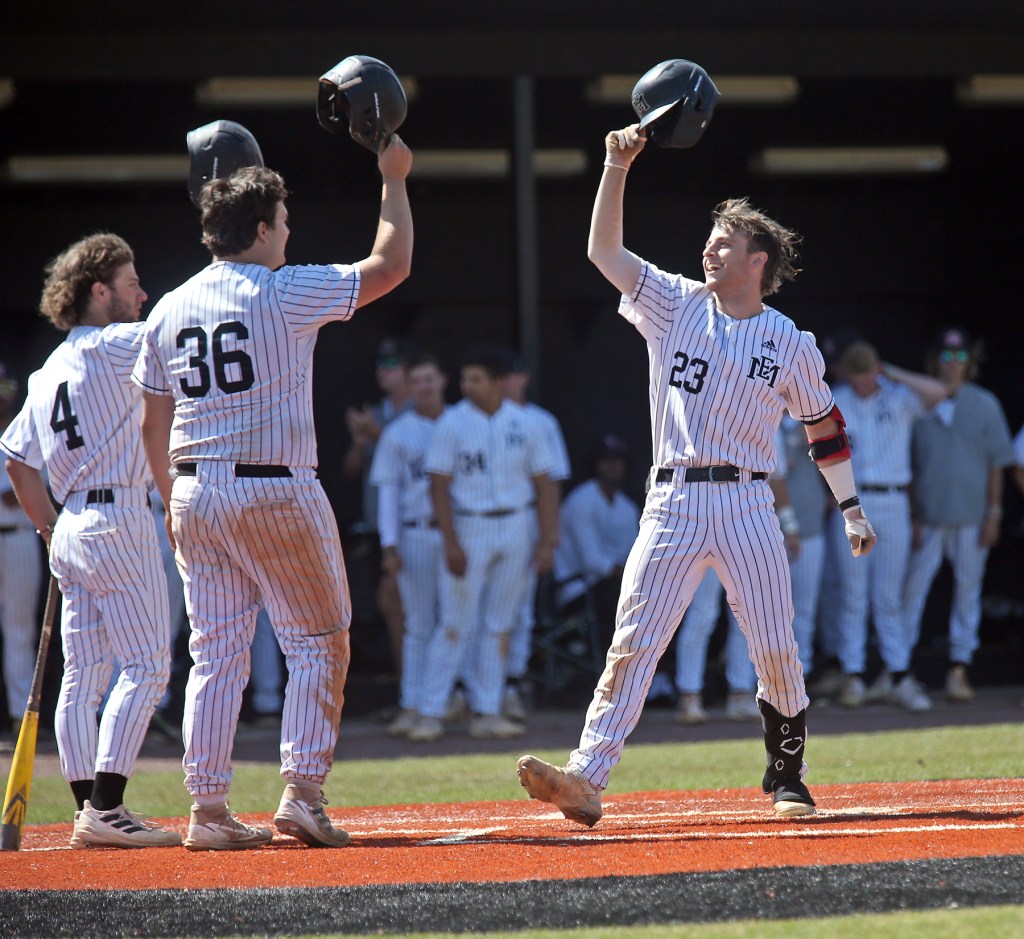 SCOOBA — Following a pair of one-run games to open the series, the Lions of East Mississippi Community College punched their ticket to the upcoming NJCAA Region 23 Baseball Tournament with an 11-1 run-rule victory over visiting East Central during Saturday’s third and deciding regional playoff game played at Gerald Poole Field.

Rebounding from Friday’s 11-10 setback to the Warriors in a seesaw affair that featured three lead changes and two ties, the Lions jumped out to an early 4-0 lead in the opening frame of the rubber match. EMCC starting pitcher Blayze Berry helped himself by driving home the game’s first run with an RBI double. Beau Bates followed two batters later with a two-out, two-run single off ECCC starter David Burton.

EMCC added another run the next frame when Wesley Sides’ sacrifice fly plated Coby Holmes, who had tripled. The visitors got that run back in their next at-bat on Coleton Smith’s one-out solo home run off Berry, but that was the only offense the Warriors were able to generate on the afternoon.

The score stayed 5-1 until the Lions put together a six-run fifth inning that began with two walks and a hit-batsman to load the bases. The big blow of the inning followed with Kade Shannon’s bases-clearing double. Later in the frame, Holmes was hit by a pitch with the bases full in front of Sides’ hard-hit ground ball to second base that scored the game’s final two runs by stretching the run-rule margin to 10 runs.

On the mound for the Lions, Berry allowed just the third-inning homer and a single in the second to record his seventh complete-game decision of the year. The UAB signee and Heritage Academy product struck out five and walked two to improve to a team-leading 6-1 on the season.

Bates and Shannon led the way offensively for the Lions with two hits apiece in game three. During the series, Bates went 5-for-8, including three singles in game one and three walks in game two. Shannon was 4-for-9 with a two-run homer in game two and the three-run double in the series-clinching victory.

After the Warriors extended their opening-game lead to 5-1 with a pair of runs in the top of the seventh, the game’s momentum began to change when Gault led off the home half of the inning with a pinch-hit home run. The New Albany product made the most of just his ninth at-bat of the season, but the reserve catcher’s memorable afternoon wasn’t quite finished. Later in the inning after Berry’s RBI single gave the Lions their first lead (6-5) of the contest, Gault then fittingly capped the eight-run explosion by blasting a three-run homer off ECCC reliever Luke Odom.

East Central managed to close the gap to a run on Kade Turnage’s two-out, three-run homer off Berry in the ninth inning, but the sophomore right-hander managed to end the threat and pick up his third save of the year. Austin Garrison earned the win in the opener for EMCC after following Grant Johnson’s solid middle relief effort of 3 2/3 innings.

The back-and-forth rematch the following afternoon saw the home-standing Lions take a 5-2 lead into the sixth inning, before East Central scored four times in the sixth to move ahead, 6-5.

After EMCC reclaimed the lead (7-6) with a pair of runs in the seventh, the Warriors posted another four-run inning in the eighth to jump back in front, 10-7.

The contest then headed to the final frame tied at 10-10 after the Lions knotted the score with three runs in their half of the eighth. In the ninth, East Central’s leadoff batter earned a walk before stealing second and moving to third on a fly out. Clayton Cook’s two-out grounder deep in the hole between third and short brought home the eventual game-winning run.

Sides paced EMCC offensively in the middle game, going 3-for-4 at the plate, including his team-high 11th home run of the season and second of the series to lead off the seventh inning. The DeSoto Central High School product finished the series going 4-for-10 with the pair of homers, five runs scored and four runs driven in.

Gault continued his power surge by belting his third homer in as many at-bats over two days with a leadoff blast in the second inning. He also added a seventh-inning single to give him four hits in six official at-bats with three homers, five RBIs and five runs scored during the first two games of the series.