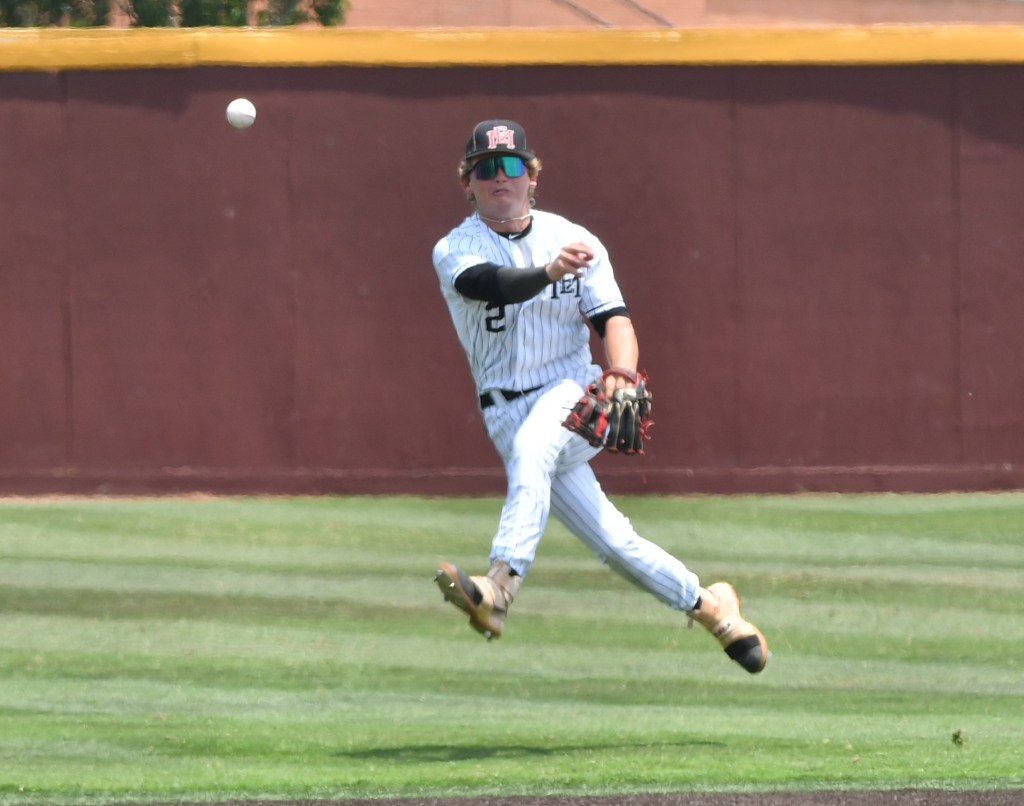 Berry Blayze throws the ball back to the infield during recent EMCC action. Submitted photo

Second-seeded EMCC opened the double-elimination tournament by claiming an 8-4 win over Jones College during Monday’s nightcap on the strength of four home runs on offense and Blayze Berry’s winning pitching effort.

Attempting to rebound from the previous night’s setback to LSU Eunice, the Lions got on the board first against Hinds with Kade Shannon’s two-run homer – his seventh of the season – coming in the second inning.

After the Eagles knotted the score with two runs of their own in the bottom of the third off EMCC starting pitcher Blake Wren, the Lions briefly went back ahead a frame later by manufacturing a run on two walks, a hit batsman, and a wild pitch that plated Beau Bates from third base.

The game’s momentum quickly changed, however, in the home half of the fourth when Hinds batted through the lineup in producing six runs on four hits. The big blow of the inning was Dylan Coleman’s grand slam off EMCC reliever Dakota Boney that made it an 8-3 contest.

Though EMCC’s Grant Johnson came in to hold the Eagles’ bats in check with three shutout innings down the stretch, the Lions could only manage one more run off Hinds starting pitcher Austin Fugler and closer John David Gunn over the game’s final five innings.

EMCC sophomore first baseman Wesley Sides, a Mississippi College signee, had a run-scoring single in the fifth and finished with three singles in the contest. Shannon also had three hits for the Lions in the season finale and reached base all four times with his homer, two singles and a hit batsman.

Hinds’ last two runs of the game came in the eighth inning on Gavin Mink’s leadoff homer and an RBI single by Justin Williams.

Head coach Brett Kimbrel’s EMCC Lions closed out the 2022 campaign with a 28-19 overall record and 20-8 conference mark for their best records since the 2015 EMCC squad (29-18; 20-8 MACJC) finished as regular-season conference runners-up en route to making the program’s first NJCAA Region 23 Tournament appearance since 2004 and earning a second straight No. 18 national ranking in the final NJCAA Division II baseball poll. After wrapping up the 2022 regular season with a third-place finish in the final MACCC baseball standings, the Lions topped East Central in a best-of-three playoff series played in Scooba and earned the No. 2 seed heading into this week’s PRCC-hosted NJCAA Region 23 Baseball Tournament.