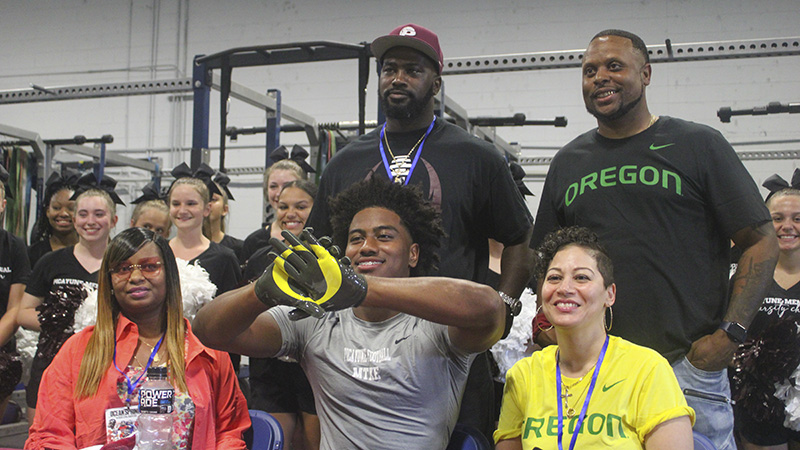 Dante Dowdell, seated center, committed to the University or Oregon on Saturday. Pictured in the back are step-father Laurence Hopkins and father Dominique Dowdell. Seated from left are step mom Stephanie Dowdell, Dowdell and mother Shalon Lopez-Hopkins. Photo by David Thornton Jr.

From being named 2021’s MaxPreps Mississippi High School Football Player of the Year, to being part of the Maroon Tide’s 2021 state championship team which earned him MVP status, Picayune Maroon Tide’s Dante Dowdell has made his mark in varsity sports within Mississippi. Now, he’ll be taking his talents to Eugene, Oregon to play for the University of Oregon.

Since his first-class performance at the Mississippi State championship game, Dowdell has been swamped with major Division 1 offers, 25 to be exact. And every single one was well deserved; he racked up two touchdowns, and 149 yards off 25 carries during the Maroon Tide’s 40-21 win over West Point in just the 2021 Championship game. During the season he ran for 2,555 yards for 28 touchdowns. That’s the third highest rushing yards in Mississippi and 30th in the nation.

When it came time to put on the gloves and announce which team will receive the next Picayune standout athlete, Dowdell toyed with the crowed a little bit. Trying on every glove a few times until the O of the Oregon Ducks felt just right around his hands. And then he announced he’d be playing for the Oregon Ducks.

When asked how he feels to be an Oregon Duck, with a huge smile on his face he said, “It feels good man, it feels like the right place for me. I really like their running back coach and they have a good coaching staff.”

Dowdell will be playing under first-year Head Coach Dan Lanning. Lanning was previously the defensive coordinator at the University of Georgia for four years where he was apart of the Georgia’s 2022 National Championship team.

“He knows what it takes to win championship football, (he is a) first-year head coach but he’s got a good vision. I like his vision and I think we can do some real good things up there,” said Dowdell.

It may be a surprise that Dowdell didn’t stay close to home and commit to Old Miss who showed very high interest in Dowdell.

“I wanted to pave a way for myself, everybody was big on the ‘staying in Mississippi’ thing but I got to do my own thing and do what’s best for me, you know.”

Anyone who has followed Dowdell’s journey through his junior year knows the young star has been very busy in the recruiting process by traveling from state to state every week and attending official college visits. As such, he said it was massive weight off his shoulders when he made his announcement.

“I wanted to get it over with,” he said.

Now Dowell can focus on the upcoming 2022-2023 season and accomplish his goal of rushing for over 3,000 yards, getting close to 40 touchdowns, and being named MaxPreps Player of the Year again,

“And of course a championship again,” said Dowdell.

The Oregon Ducks fans have a lot to look forward to in Dowell and he doesn’t plan to disappoint.

“They’re getting something they never had before. They don’t have a lot of real big (running) backs from the south up there, so I got to pave the way, show kids from the south that it’s alright to go to a school out there. You don’t have to stay close to home to do your thing.”