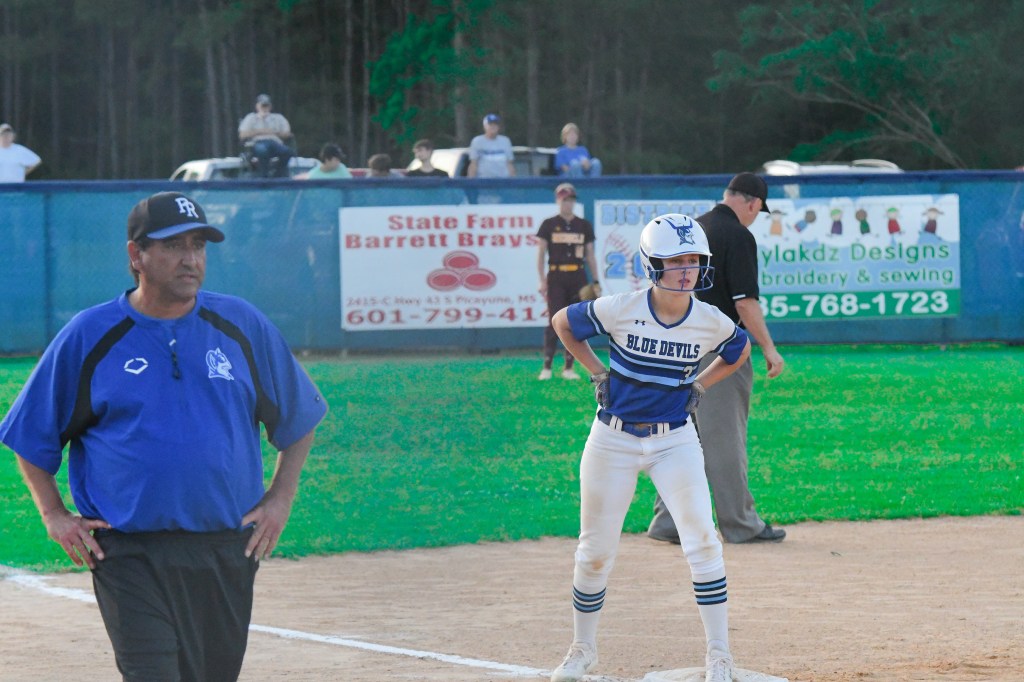 The Pearl River Central Lady Blue Devil softball team came up short in this season’s championship run after dropping two games to the George County Rebels over the weekend.

Game one of the second round of 5A state playoffs was played Friday at PRC. PRC jumped to a 3-0 lead after one inning thanks to a three-run homerun hit by Izzy Martin. At the bottom of the inning, the Rebels hit a homerun, putting the score at 3-1. The Rebels took the team’s first lead in the third inning by scoring four runs; first off a pitching error, then a two run RBI, and lastly a single run RBI. After that series of plays, the Lady Blue Devils trailed 5-3.

The game tied at 5-5 at the bottom of the inning after a single RBI hit from Cailey Pervel was followed by another single RBI from Jazmin Robertson.

Game two was played in Gorge County where the Lady Blue Devils fell 13-6.

After two innings the Lady Blue Devils led 5-1, but the Rebels scored four runs in the bottom of the third to tie the game at 5-5. After that, the Blue Devils went scoreless for the next two innings as the Rebels put up eight runs.

“Everything kind of went south for us, we had a lot of mishaps on defense and we couldn’t turn it around,” said Head Coach Tony Labella.

Down 13-5, the Lady Blue Devils managed to add a single run to the score in the sixth inning, but it wasn’t enough.

“It was disappointing, I think we were all really excited about playing this series, we knew it would be good and a real tough test,” said Labella.

“I think all the players and coaches feel that we didn’t play our best ball in the end. We didn’t play as well as we had been playing in district and that was disappointing, but it doesn’t take anything away from what we’ve accomplished during the season. Undefeated in a really strong district is definitely something to be proud of,” Labella said.

The Lady Blue Devils finished the 2022 season 19-11 overall and placed first in district going 6-0. In Labella’s nine years as head coach, he holds a district record 41-4.

“Next year’s team will have a lot to live up to. We got the district championship back where we wanted it to be. We won some close games in district, and teams will be after us again. We’ll have to try and play really well and prove that we want to keep that streak intact,” said Labella.