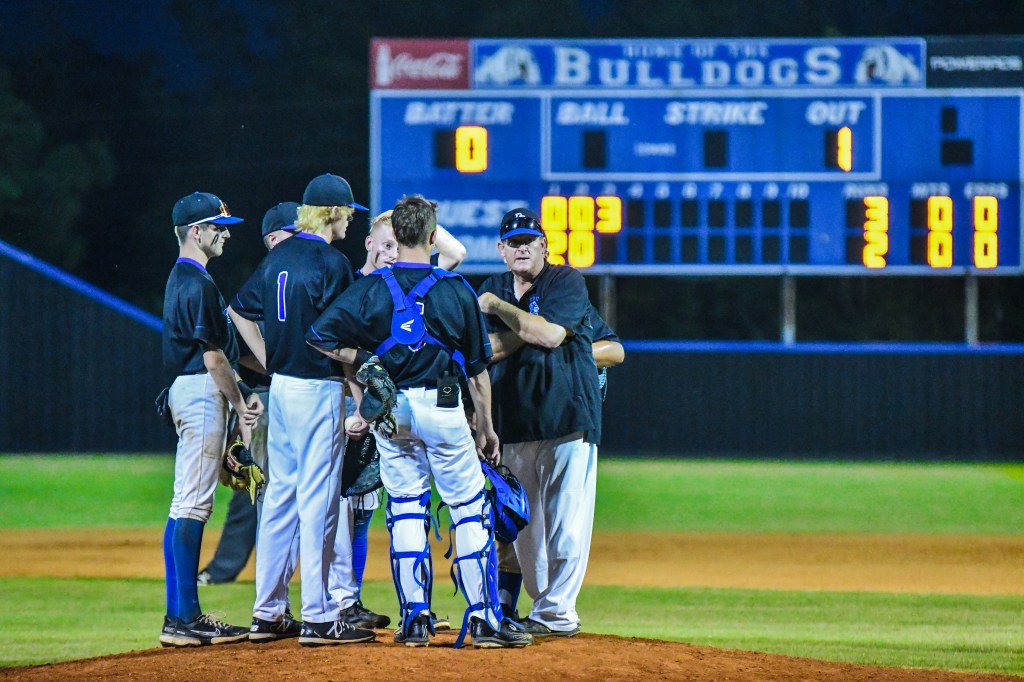 Coach Neil Walther and infielders Jacob Johnson, Landen Droddy, Hunter Brunson, Noland Walther, Jared Dickens and Jacob Stockstill, gather on the mound during game two win over Vancleave Bulldogs in the third round of the 5A State playoffs.

After losing 5-1 to the Vancleave Bulldogs, the Pearl River Central Blue Devils forced a game three after Saturday’s 8-5 thrilling comeback, but fell during Monday’s game to close out the team’s post season run.

The Blue Devils continue to show their longevity and ability the dig themselves out of a hole after forcing another game three series. They were in the same situation against the George County Rebels in round two.

Game stats: 31 plate appearances with 24 at bats and three base on balls. The Blue Devil pitching stuck out 12 batters.

On Saturday night the Blue Devils traveled to Vancleave for game two and grinded out a thrilling comeback win in seven innings. The Blue Devils found themselves down 0-2 after a two-run homerun by the Bulldogs. At the top of the third inning the Blue Devils took a 3-2 lead, courtesy of Heath Brunson’s home base steal, a sacrificed fly by Jacob Stockstill and Caleb Dyess’s home base steal. At the bottom of fifth inning, the Bulldogs took 4-3 lead after back-to-back wild pitches by Justin Robinson. Robinson made up for those pitches by closing the inning with a strike out. At the bottom of the sixth inning the Bulldogs managed to get bases loaded. They scored off another wild pitch for a 5-3 lead. At the top of the seventh is when the thrilling comeback began, completing a five run comeback.

Heath Brunson started the inning with an energizing triple base hit. Then Jared Dickson recorded a sacrificed fly for Brunson to score and shrink the deficit to 5-4. With bases loaded and Hunter Brunson at bat, he was hit by Bulldogs wild pitch and the Blue Devils got a free run to tie the game at 5-5. Next, Conner Dyess recorded a sacrificed fly for a single run, and a 6-5 lead. The Blue Devils then had bases loaded again after Austin Gill was hit by another wild pitch. They capitalized off that Bulldogs mistake with a two run RBI. When the Blue Devils received their third out they found themselves up 8-5.

At the top of the seventh the Blue Devils defense was locked in. Jacob Johnson made a diving catch in foul ball territory for the Bulldogs first out. Then Roberson put the team on his back and struck out the next two batters to close out the game.

The Pearl River Central Blue Devils season came to an unfortunate end after being handed a 6-2 loss to the Vancleave Bulldogs in game three.

The Blue Devils trailed big in the third and sixth innings, struggling to produce runs and pull together stops. While the end of the series was not the best outing for the Blue Devils, they stuck it out till the end, scoring two runs in the sixth inning for a more respectable score.

“Obviously we didn’t play our best baseball, it’s what we preach in high school baseball, ‘the team that hits the most ground balls won, and the team that forces people to make the most plays,” said Head Coach Neil Walther.

“We did have some very good plays out there, we did have a couple big hits, we just didn’t have them timely when we needed them. We had several opportunities where one hit could change the game but you know, that’s baseball.”

At the top of the third, the Bulldogs capitalized off the Blue Devils missed scoring opportunity with four runs of their own. They scored off a double RBI, and two separate single run RBIs for a 4-0 lead.

Since 2012 the Blue Devils were cut short of playing in the South State semi-finals, or further, only twice. Walther says this is the standard, and a point in the post season where he expects his team to reach. The Blue Devils finished this season 23-11 and as 5A region 7 district champions.

After a long huddle following the loss, Walther left the underclassmen with food for thought.

“I told the guys that are coming back this year that this shouldn’t be their goal, this is sort of an expectation,” said Walther.

The Blue Devils will be losing several seniors. Yet, he feels the seniors have nothing to hang their heads about because they left the Blue Devils program better than what it was.

“(I’m) Just real appreciative of what the seniors have done, but the thing with me and at least with high school baseball is I get a brand new group of seniors each year, so its hard every year,” said Walther. “It’s sad to see those seniors go, but we’re excited about the next group and we’re getting back to work tomorrow.”