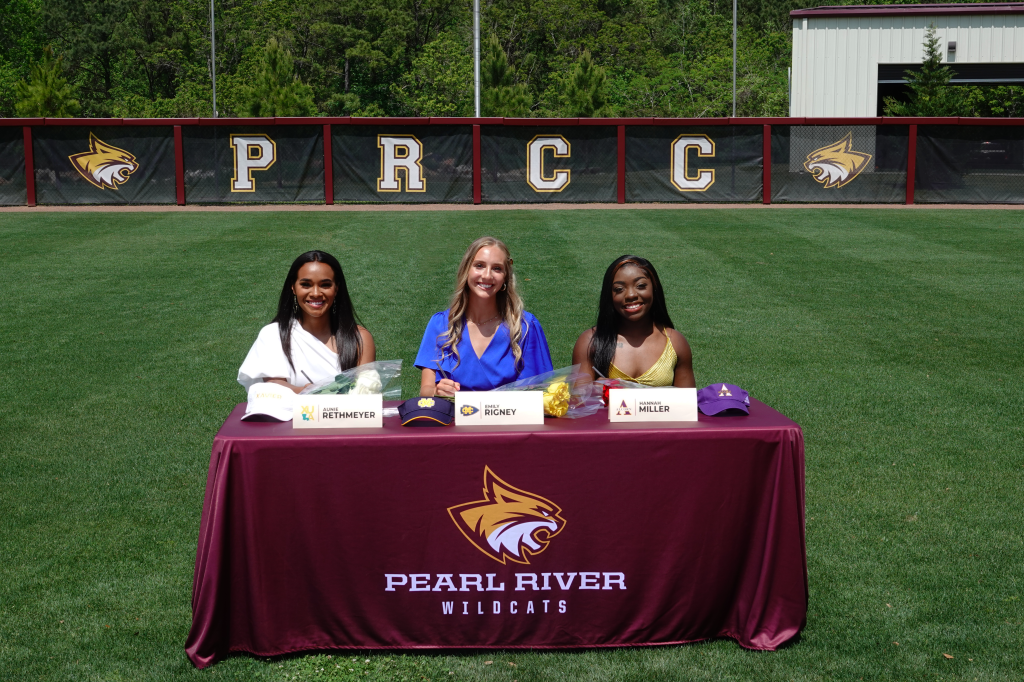 POPLARVILLE, Miss. — The Pearl River softball team has had many reasons to celebrate this season and added on a few more reasons Friday as three Wildcats signed to play with four-year programs.

“This group means so much to us,” Pearl River coach Christie Meeks said. “Two years ago, they decided to believe in us and our vision for this program. They have helped us establish so many firsts for us and Pearl River softball. Now getting to watch them as they sign to continue their careers with great four-year programs brings us such joy. They have helped create a standard here and we hope to have many more of these signings in future years.

“These three are true leaders on this team and will always hold a very special place in this program. We are so excited to see them further their careers on the field and represent Pearl River Community College with pride, respect, class and character.”

Miller is in the middle of a great offensive season for the Wildcats as she holds a .303 batting average with 26 RBIs, 30 runs, eight doubles and five homers. She has also been a threat on the basepaths this season, stealing 20 bags.

As a freshman, Miller played more of a utility role for the Wildcats but still featured in 33 games while hitting .270. She finished the year with five doubles, three homers and 14 RBIs.

“Hannah is very special to us. She was one of our first recruits that committed in her class,” Meeks said. “She decided to believe in what we were doing, and she has never looked back. Her growth between last year and this year has been unmatched. She has become confident in herself, knows the game, and has learned how to lead with her actions as well as her voice. I am so proud of her on and off the field. She leaves a legacy of true determination. Whatever she puts her mind to she accomplishes.”

Miller feels like she will always be able to call Pearl River home.

“Pearl River means a lot to me,” she said. “I grew a lot here and it will always feel like a big part of my life.”

The future Brave felt at home on her campus visit.

“I really liked the atmosphere at Alcorn,” Miller said. “I feel like I can continue to grow as a person, and it really felt like home the moment that I stepped on campus.”

Rethmeyer has proved to be a great defender and threat at the plate in her sophomore campaign. She currently holds a .275 batting average with four doubles, two homers, six walks and 14 RBIs.

A season ago, the catcher hit .207 with four doubles, two homers and 16 RBIs.

“Aunie has truly grown within her two years here,” Meeks said. “She leads and commands on the field and that is what you need in a catcher. She is so much more grounded and confident in who she is at the plate and catching. I know Aunie will represent Pearl River to the fullest at Xavier. Her legacy has always been to be true to who you are and believe in yourself.”

The Wildcat backstop felt that Pearl River has been a integral part of her growth.

For Rethmeyer, being close to home as well as her future plans played a role in her choice.

“Xavier is so close to home,” she said. “It’s always been a dream of mine to go to pharmacy school and they have a great program. God has blessed me so much with this opportunity and I’m very grateful.”

Rigney played a reserve role as a freshman but has proved to be an crucial piece in the Wildcat lineup during the 2022 season. In 35 games, Rigney is hitting .317 with three RBIs and three walks. She has also registered four stolen bases.

In her freshman season, Rigney registered 18 at-bats, hitting .333 with one double, one triple and six RBIs.

Rigney was also named the first ever team captain under coach Meeks.

“Emily has been such a pleasure to coach,” Meeks said. “She is one of the most coachable players and hardest workers I have ever met. She leaves a legacy that nothing is impossible if you work hard enough for it. She has earned everything that she has achieved, and I believe she will be such an asset to Mississippi College. She is a true leader on and off the field.”

Friendship has been a big part of Rigney’s time with the Wildcats.

“Pearl River means family,” she said. “I’ve met some of my closest friends here and they’ll always be some of my best friends. They have all helped bring out the best in me.”

Rigney felt like the decision to join the Choctaw wasn’t really a decision at all.

“This decision was easy,” she said. “Mississippi College has been my dream school for as long as I can remember. I know that they will push me athletically, academically, and spiritually.”