Spring 2022 Street Festival was a hit 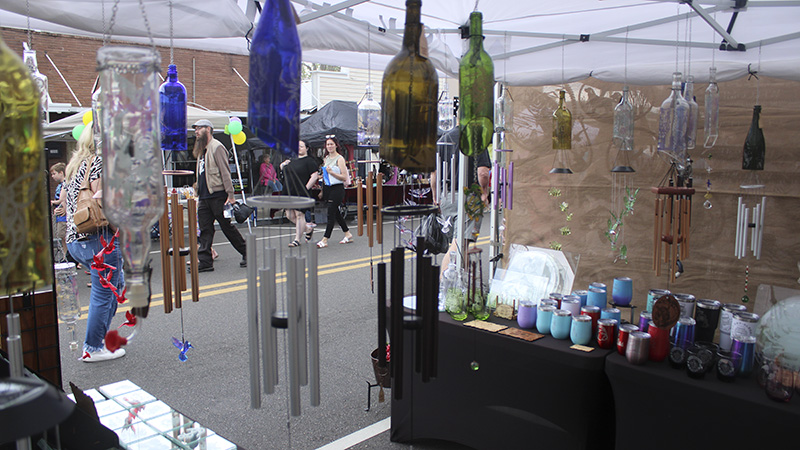 This past weekend's Street Festival held in downtown Picayune featured a number of hand made items. Photo by David Thornton Jr.

Christian Do Karate held a Namido Christian Do Tournament, with 11 fighters going three rounds. One fight featured two best friends, Ellie Ola and Caylie Ives. This fight went the distance with Ives winning by vote. Another fight featured two siblings; an older sister and younger brother. Dallas Stricker vs. Kayla Stricker was a sight to see as the younger brother Dallas came out on top winning in two rounds.

With so many vendors, music and people visiting Picayune’s downtown, the event was very lively on Saturday.

Benwell’s Precious Oil Essentials and V’s Flagrance Candles came all the way from Jacksonville, Florida to attend this year’s Street Festival. The business has been booming for four years and Picayune native Veronica Barnwell is head of the company. Growing up in Picayune, Barnwell said she hasn’t been to the Street Festival much lately, but luckily a cousin of hers remaindered her about it and now she’s been a vendor for the past two years.

“It’s good, we love it and we continue to come here twice a year,” Barnwell said.

This year they came prepared. Barnwell said this was the first year she brought over 30 candles and fragrance oils to display. They also make soaps, lip balms, oil lamps and difusers. Barnwell’s business is run from home and her products are also offered at events like the Street Festival. That means the pandemic never affected her business. Their creative smells attract all ages, featuring scents such as a Captain Crunch candle, which is one of the company’s most poplar items. They even had a ‘his and hers’ scented candle decorated in wine glasses.

Barbra Heinbaugh of Fence Peepers & Yard Décor has been making peeping animals for “quite a few years” she said. Heinbaugh’s business is based out of Long Beach and this weekend marked her fourth Picayune Street Festival. During the bi-annual event, Heinbaugh likes talking to the people who come to her booth, they’ll immediately notice her happy, peeping fence animals and her dozens of bright, colorful birds.

“The big thing is when people come to this booth they smile… part of what I do, if you notice the animals are all happy and colorful, if you stand here you’ll see everybody walking by with smiles, that makes my day.” Heinbaugh said.

Heinbaugh has always created crafts and loves doing “happy stuff,” which explains why the peeping animals always have a smile.

Based out of Waveland Mississippi, Jessica Blades of Momma J’s Jam’n Jellies & More makes pepper jelly. Her combination of sweet, and tangy spice, “sweet heat” she calls it, is perfect for marinating chicken, shrimp and even wings. She’s been making jams for three years now. Blades was a former teacher and during the pandemic she needed something to do with her time. It all started with finding a way to use the crops from her 50 pepper plants she grows at her farm.

“I was like what do you do with all these pepper plants, you make pepper jelly,” said Blades.

This is her third year at the Street Festival in Picayune and since then her cliental has grown. Her business has allowed her to ship products to 19 different states. Her best sellers are the crawfish pepper jelly, pineapple habanero and pecan praline.

Darlene Chatham displayed her paintings that capture complex detailed ocean water and common sea animals like seagulls, turtles and jellyfish. Chatham has had a lot of time to paint since the pandemic, and her sales and followers grew.

“It took off as you have lots of time to create,” said Chatham.

She’s been selling her stuff to attendees of the Street Festival for over 25 years. Before selling her paintings, she sold cooking utensils.

“I started bring in my paintings, now its all paintings,” she said.

Chatham gets her inspiration from actual events like a visit to an aquarium, or the beach.

The hot sauce has all natural ingredients with a perfect balance of multiple vegetables. It contains very low sodium content, zero calories and a high level of ginger. Louis started this business during the recent pandemic, and it all began with a stray dog and a garden.

“I started a garden, I didn’t know nothing about no gardening, didn’t have a clue,” said Louis.

Louis was a college recruiter before COVID, but during the pandemic he was forced to stay home. One day while working on his garden a dog showed up, Louis paid it no mind but later that evening his wife had brought the dog into the house and now it’s the couple’s pet.

One day of gardening work, the dog had dug up everything Louise had planted, but everything still grew. Louise made a sauce for his wife to try, Louise said that his wife’s reaction was, “If you don’t put this on the market I’ma leave you.”

At the time Louis knew nothing about starting a business, he didn’t know what to do or if he wanted to continue making the sauce. So he let faith decide, he flipped a coin, and it landed in favor of making the sauce.

“If it went the other way we wouldn’t have this hot sauce and that’s literally how we got start started,” he said.