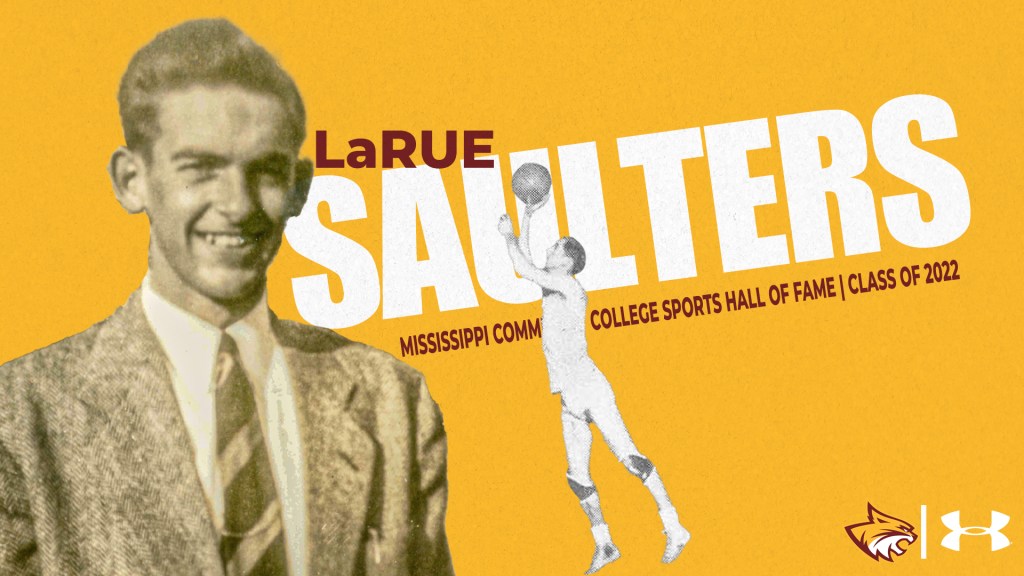 POPLARVILLE, Miss. — Pearl River Community College’s newest MCC Sports Hall of Fame inductee earned a rare “career double-double.” LaRue Saulters is believed to be one of the first basketball players in Mississippi history to be selected to two all-state teams while leading PRCC’s “Cagers” to state championships in 1945 and again in ‘47 after serving his country.
On Tuesday, Saulters will be honored alongside representatives from the 14 other community colleges during the 2022 Mississippi Community Colleges Sports Hall of Fame ceremony. The celebration is at Hinds Community College’s Clyde Muse Center in Pearl.
Although Saulters died in 1996 at the age of 69, he will be represented by his children, Susan Perry and David Saulters.
“LaRue Saulters exemplifies everything you are looking for when nominating someone of his stature into our state Hall of Fame. Not only was he a decorated champion on the court claiming two state championships, he was a decorated individual,” Pearl River Athletics Director Scotty Fletcher said of Saulters, who was inducted into PRCC’s Sports Hall of Fame in 1990. “LaRue was patriotic and served his country with the bravery that people envy and love to see. He and his family continue to help countless students at Pearl River Community College as well as being a pillar for the surrounding communities.
“LaRue was every bit of a servant leader and a true American hero. This is another example for us to pay tribute to a life well-lived.”

FIRST CHAMPIONSHIP
Saulters was a standout on the hardwood even before reaching PRCC. A native of nearby Carson in Jefferson Davis County, in 1944 Saulters helped lead his high school team — which was coachless that year — to a second-place finish in the state basketball tournament. He enrolled at Pearl River that fall and later led the Wildcats to the 1945 State Championship. Not only did Saulters captain the team as a freshman, but he was also named to the all-state team
After serving in Okinawa with the Eighth Air Force, Saulters returned to Pearl River to finish out his playing career.
BACK FOR MORE
The ‘47 squad turned out to be a true worst-to-first storybook season. That season, the state tournament was limited to just eight teams, and despite dropping their first five games of the season the Wildcats squeaked in at No. 8.
Prior to the start of the tournament, Saulters had helped Pearl River defeat Perkinston (Mississippi Gulf Coast) 37-33. In a report of the rivalry contest, Saulters was said to have “spearheaded” the four-point win with a 12-point performance.
“Saulters, sparkplug of the PRC state championship team of two years ago, served notice on state junior college teams that the army has not taken too much basketball out of his system,” read the article in The Weekly Democrat. “… Just to look at this pint-sized guard, a person would think that he would not have a chance in a league that features big men.
“But he was in the game every minute, dribbling with either hand and hitting the basket from either the right side or the portside.”
(For the record: While wire thin, Saulters stood around 6-feet tall.)
The road to a second championship in three seasons wouldn’t be easy as the Wildcats matched up with No. 3 Holmes, No. 2 Moorhead (Mississippi Delta) and No. 1 Ellisville (Jones College).
Saulters really made a name for himself and caught the attention of local scribes during the run, scoring 31 points over the three days.
Saulters netted 14 points in a 49-41 win over No. 3 Holmes; 10 points in a 56-48 win over No. 2 Moorhead; and seven points in a 42-34 victory over Ellisville in the title contest.
“With (Arnold) Dillon, George Stevens, (Wendell) McDowell, Larue Saulters and (Charles) Tiny Terrell playing for keeps, victory came sweet in repayment of the defeats suffered at the hands of Ellisville earlier in the season,” The Weekly Democrat said.
For his efforts, Saulters once again landed on the all-state squad.
Following a year at the Dallas Institute of Mortuary Science, Saulters played for his former high school coach, John Ray Ricks, at Delta State in 1948-49.
In 1949, Saulters married his college sweetheart, Mary Jean.
Mary Jean was a hall-of-famer in her own right and went on to be a champion of Pearl River. A beloved alumnae of Pearl River, Mary Jean and her husband contributed annually to a scholarship fund. Mary Jean was named PRCC’s Alumnus of the Year in 2011.
“They just had fond memories of PRCC,” David Saulters said.
“You see a lot of people who have that connection to a four-year college. Pearl River was in their heart.”
Added Susan Perry: “They loved Pearl River. That’s where they met and my mama always said how special it was.”
After graduating from DSU, Saulters later taught at Sumrall before starting the Saulters Funeral Home with his father and another partner.
Even later in life, Saulters would still pull out his old skillset from time to time to prove he hadn’t lost his all-state form.
Recalling a one-on-one game from when he was in high school, David Saulters couldn’t help but laugh.
“I played a little basketball. I was never the ball player he was, but I played a little,” the youngest Saulters said. “When he was in his 50s and I was in high school, he could still whip me pretty good on the basketball court.”
Although Saulters was often busy with his business, his boyhood fondness for basketball never dissipated.
“He loved basketball,” Perry said. “Gosh, he loved basketball.”