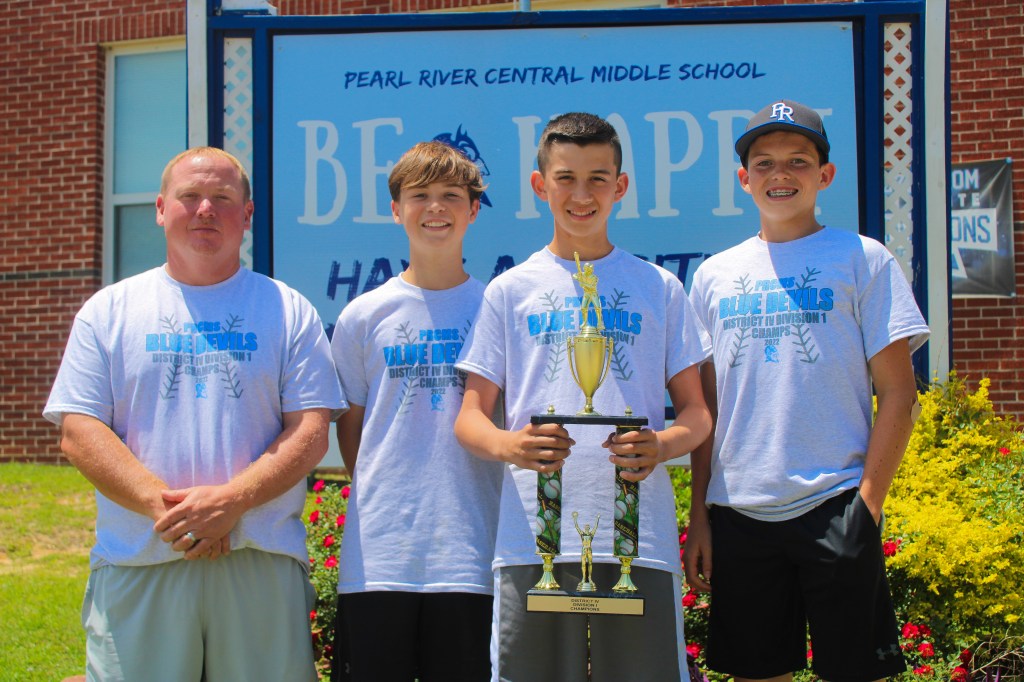 On April 21 the Pearl River Central Junior High School baseball team won the state championship. The Blue Devils beat George County that Thursday 3-2 and finished 10-3 overall. A few kids that led this team were eighth graders Ayden Westbrook (centerfield), Roman Mitchell (short stop), and Parker Harper (second base).
Westbrook said every game this season was close.
“We had to have a bunch of comebacks,” he said.
Their season of close games began in their opener against Hancock that finished in extra innings. Unfortunately it ended being one of the team’s three losses.
Their first round of the playoffs went into extra innings as well, this time the team pulled out a win, beating Biloxi by two runs. Mitchell said during that game the team made big plays to come back and win the game to advance to the playoffs.
In the second round of the playoffs, the Blue Devils scored a single run at the bottom of the fifth to beat West Harrison. In the championship game against George County, the Blue Devils led 1-0 through three innings, then George County scored two runs in the fourth to take a 2-1 lead. In the bottom of the fifth with two outs, the Blue Devils battled out two runs to take a 3-2 lead and win the championship.
Mitchell and Harper said they liked being in those close games, Westbrook agreed but said “kind of.”
The Middle School Blue Devils baseball team is balanced in age. Head Coach Randy Brown started six of his 12 seventh graders, and played eight total eighth graders. And eighth graders Westbrook, Mitchell and Harper started the entire year.
“It was good to watch all of them come together. Again we had a deep, deep class that was very talented. And to watch them come together and accomplish what they did was real good,” said Brown.
Westbrook, Mitchell and Harper are leaders in their own way and good teammates.
“They’re very deserving of it,” said Brown.
Beating Biloxi in the first round was one of the three best moments of the season for the team. Mitchell said his best game was when the Blue Devi’s beat West Harrison.
“Because we beat the best pitcher in the league, and he hasn’t been beaten all season,” Mitchell said.
When asked if that game felt like the turning point towards a championship year, they all agreed.
Their championship season concluded in a well-deserved celebration party including a large crawfish boil and pool party this past weekend.
The players loved it and said the party was fun.
“It was good for them, and it’s something that’s never been accomplished here (a championship) that I’m aware of,” said Brown.
When asked, all three said they will attend PRC High School the upcoming year.