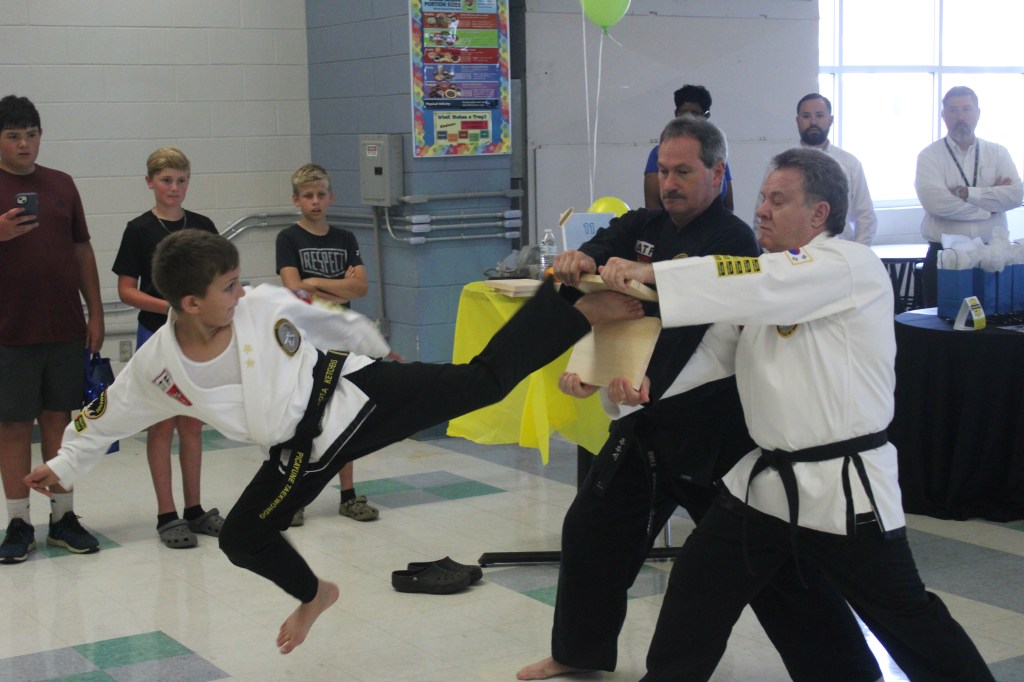 Dakota Ketchens breaks a board in two with a flying kick at Pearl River Central High School’s family health fair.

At the booth featuring information about vape products and tobacco usage, students learned that both substances cause the same amount of damage to the lungs. Juuls and other forms of E-cigs are commonly called vapes, and many contain tobacco. Some cigarette companies mix other drugs or chemicals in with the tobacco, like lead. When it comes to informing families about tobacco the Nursing Department at PRC Penny Holifield said,

“We basically tell them they need to understand tobacco is a drug because it has nicotine which is a addictive substance, it’s more addictive. It’s a gateway drug, if you’re willing to start tobacco then you may be willing to try something else later in life.”

Brandon Herrin who is the campus police chief for the Pearl River County School District gave a visual demonstration of what is like to be intoxicated. That effect was caused by having attendees wear drunken goggles that impaired the person’s vision to simulate being drunk on three beers. His focus was to raise awareness that there are a lot of things children and young adults can get involved in like alcohol.

Herrin says he sees a lot of the families at the local sporting events and on a daily basis, and he works to building good relationships with campus staff and the people in the community.

West Union Baptist Church was offering books about life and flyers that provided guidance toward spiritual growth for young children and teenagers. Their aim was to highlight that the importance of spiritual health is as important as mental and physical health.

“Emotion and spiritual things will eventually effect you physically…if you can get this taken care of, then it is like a domino effect,” said West Union Baptist Church representative Marilyn Schielder.

Picayune Eye Clinic was on site to provide families with vision tips and the importance of protecting their vision.

Too much screen time can cause eyestrain, headaches and various other visual problems. The doctors at Picayune Eye Clinic went over the importance of eye health with the children and taught them to take breaks from the screen using a simple tactic. They teach the 20-20-20 rule. For every 20 minutes of using an electronic device, the suggestion is to take a 20 second break and look at something 20 feet away.

William Wilbanks and Dakota Ketchens both started learning the maritial art at the ages of 3- and 4-years-old. Their instructor, Bret Berras (Chief Instructor at Picayune Taekwondo), said their self-motivation is through the roof.

Taekwondo is a martial art that builds toughness. It also hits the three pillars of heath; spiritual, mental and physical. Picayune Taekwondo is Christian based, so students pray before every practice. It also builds confidence and discipline. The five tenets on Taekwondo are courtesy, integrity, perseverance, self-control and indomitable spirit, and students at Picayune Taekwondo live by these tenets everyday.