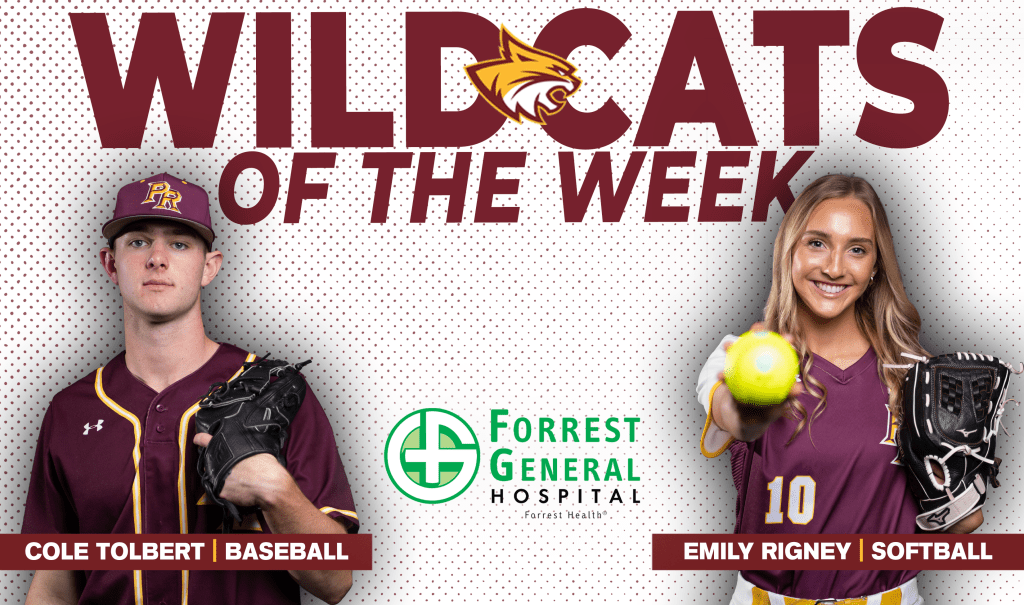 COLE TOLBERT
Tolbert lands the award after a stellar week on the mound for the No. 1 Pearl River baseball team. He began the week by pitching two no-hit innings against Gulf Coast. He struck out four batters against one walk.

The right-hander then made his first start of the season against East Mississippi and turned in a great outing. He pitched 4 1/3 innings, allowing just two hits and one unearned run. He tallied seven strikeouts in the game and walked two batters.

The freshman has been a very reliable arm out of the bullpen for the Wildcats. Through 21 innings pitched, Tolbert holds a 1.71 ERA with 31 strikeouts.

EMILY RIGNEY
Rigney was on fire at the plate for the No. 8 Pearl River softball team in last week’s doubleheader sweeps of No. 17 Gulf Coast and East Mississippi. The sophomore finished the week with a .636 batting average while tallying seven runs scored, two RBIs and one walk.

Through 26 games played in the 2022 campaign, the team captain holds a .310 batting average and 15 runs scored.

UP NEXT
Softball returns to action Wednesday in a top-10 matchup against No. 2 Copiah-Lincoln. The doubleheader is set to begin at 3 p.m. and will be livestreamed at PRCCMedia.com/Gold.

Baseball begins a two-series road trip Wednesday with a matchup against Copiah-Lincoln. The games are set to begin at 3 p.m. and can be viewed at CoLinAthletics.com/watch. The game can also be heard at WRJWRadio.com.