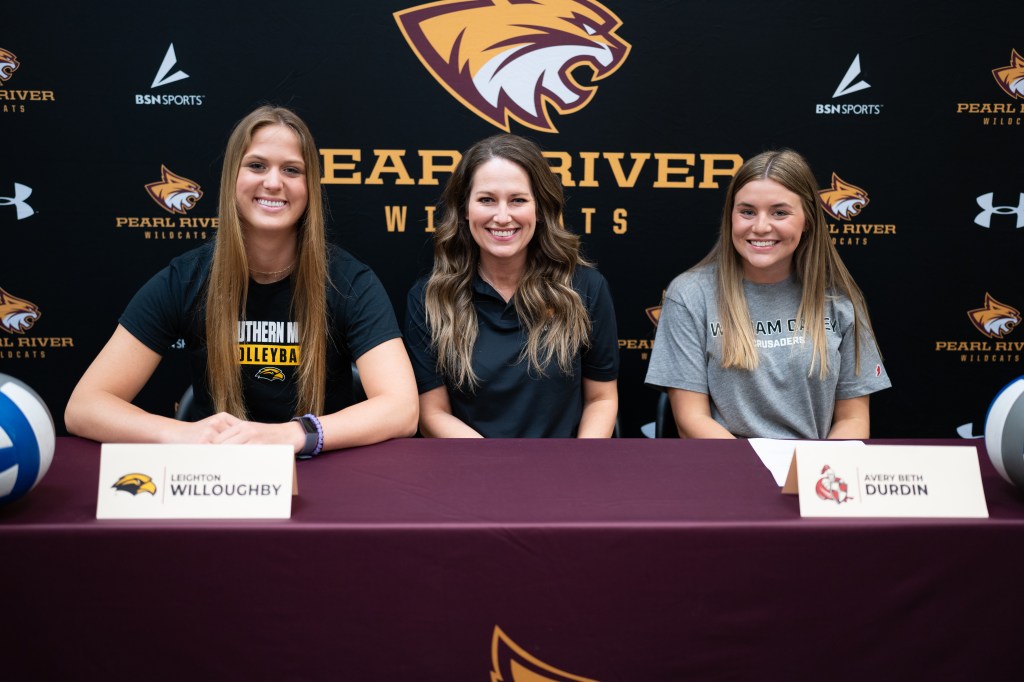 POPLARVILLE, Miss. — Fresh off the best season in its young existence the Pearl River volleyball team is sending two standouts to the next level. Avery Beth Durdin (Olive Branch; Lewisburg) will move on to William Carey and Leighton Willoughby (Brandon; Northwest Rankin) will suit up for Southern Miss.

“Avery Beth and Leighton were both instrumental parts of the success we were able to enjoy during our second and third seasons,” head coach Haley Chatham said. “We are so proud of both of them for earning the opportunity to play at the next level. We can’t wait to watch them make an impact on those programs, just like they did here for us.”

Durdin did it all in her two years in a Wildcat uniform. During her sophomore campaign, Durdin finished second on the team in assists with 425. She also had 211 digs and 91 kills. She was one of the best on the team at serving, finishing tied for third with 43 service aces.

Chatham spoke about Durdin switching to a new position and the impact it made on her program.

“AB came to us as a right-side hitter in 2020. Due to COVID-19, She rode out the postponement of our fall 2020 season to spring 2021,” she said. “We lost three of our personnel during that time due to injury and other factors, just before the start of the season. One of those positions was a starting setter. I brought AB in and told her that we needed her to step into that setter position and that I knew it would be very challenging for her but if anyone could do it, I absolutely knew it was her. She didn’t hesitate. She said ‘yes’ to me and never looked back. She did not have a ton of setting experience; it’s a super important position and a tough craft to master. She grabbed hold of the responsibility and turned herself into one of the best setters around. She led us to the region tournament in Alabama where we put out three teams and finished in fourth place, as a second-year program. During the Fall 2021 season, AB continued to develop as a setter and helped our team achieve a 27-4 record, finally breaking into the National Rankings.”

Chatham also talked about how important Durdin was to Pearl River’s success.

“We absolutely could not have done it without her,” Chatham said. “I am still in awe of how she stepped into a brand-new role and carried the team as our “quarterback” without the slightest sign of bending or breaking. AB earned the title of the “Swiss Army Knife” of our team which is a title she wore proudly. She finds a solution and creates a path to success, letting nothing stand in her way. I can’t wait to watch her lead her next program to new heights as a Crusader just as she did for Pearl River volleyball.”

Durdin talked about how important her time at PRCC was.

“My time at Pearl River was indescribable,” she said. “I really learned how to love a sport, love my friends and love being five hours away from home. I really realized how much I loved South Mississippi and being down here.”

Willoughby finished her 2021-22 campaign third on the team in kills with 165. She was second on the team in block assists, finishing with 40. She also chipped in 18 digs and 11 assists.

As a freshman, Willoughby collected 152 kills while finishing second on the team in block assists with 64.

Like Durdin, Willoughby took on a new role upon joining the Wildcats.

“Leighton made the jump from being an outside hitter for her high school team to being a dominant middle blocker in college in just a few, very short months,” Chatham said. “When our fall 2020 season was pushed to spring 2021 and we lost our middle hitter to injury, Leighton decided to become a Wildcat seven months earlier than planned. She finished her high school season in October and started her college season in January. She made an instant impact on our program and never left the court over the next two seasons.”

Chatham also talked about the growth that she saw from Willoughby over the course of her PRCC career.

“She is a dedicated player. I watched an already talented girl get better in her position every single day as a result of her dedication,” she said. “She became the leading blocker on our team and transformed into one of our power hitters over a very short span of time. Not only is Leighton a super smart player, but she’s also fiercely determined. Combine that with her size and power, and she is a lights-out athlete that any program would be lucky to have. It was a pure joy to watch this unsure, extra young freshman blossom into a dominant, confident player and an extraordinary young woman. One thing is for sure about Leighton Willoughby – once she decides to do something, she goes all in by dedicating herself to finding success. That capability and drive have recently led her straight to a Division I program and will continue to lead her to many successes throughout her life. We can’t wait to watch our Wildcat soar to new heights as a Golden Eagle.”

Willoughby talked about what it was like to be a Wildcat.

“I really liked my time at Pearl River,” she said. “I made some of my best friends. I feel like they will be in my life for a really long time and that’s what you hope for in college. I got really lucky with my volleyball experience. I had a great team and a great coach. I really feel like it helped me and developed me into a player that could compete at the next level.”