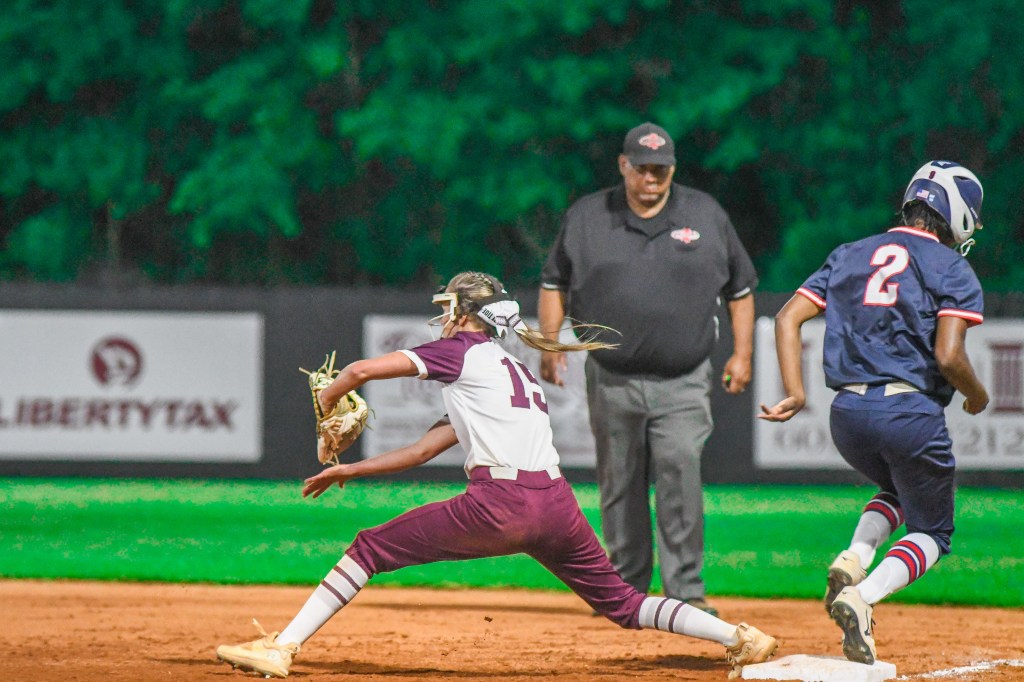 Skyler Timmons reaches to make a key catch at first base during the Lady Tide's game one win over the Panthers on Friday night.

The Picayune Lady Maroon Tide won back-to-back games against to the Brookhaven Panthers in a bid to advance to the second round of the 4A state playoffs.

Game one was played in Picayune on Friday night and the Lady Maroon Tide had a strong start and finish to win 6-2.

“I felt like we got the bats going right off…these other teams have been jumping out on us early and I kind of wanted to do the same tonight,” said softball Head Coach Courtney Dickens.

“We jumped out on them early tonight. I was proud of them for that. We made some adjustments at the plate, (there were) some things we’ve been struggling with and I saw us make that adjustment tonight, was proud to see that. Defense wasn’t bad, we made a couple errors, which you know those are going to happen, but not a bad night on defense,” she said.

Dickens said the Lady Maroon Tide jumped on the Panthers early, jumping to a 5-0 lead after three innings. Brooklyn Wilson collected a single RBI in the bottom of the first inning for a 1-0 lead. Katie Hedgepath stole home plate after a pitching error in the second inning for a 2-0 lead. In the third inning Brooklyn Keller connected for a double RBI hit then Barcley Martinez followed by hitting a single RBI for a 5-0 lead.

The Maroon Tide defense was on point during the 5-0 run. Pitcher Kylie Burnette struck out four batters and both the infield and outfield got evolved, catching fly balls and making plays at all bases.

At the top of the fourth inning, the Panthers scored the team’s lone run of the night. It occurred off a Lady Maroon Tide error allowing a Panthers runner to double the bases home.

At the bottom of the sixth, Kaigyn Kulas added to the Maroon Tide score after a single RBI run, 6-1.

At the top of the seventh, the Panthers scored on a run but that’s all they could manage as the Lady Maroon Tide won 6-2.

Game two was in Brookhaven but the outcome was the same. On Saturday night the Lady Maroon Tide stole the series with a 15-1 win. They put together 4 runs in the first inning, 6 in the second and 5 in the fourth inning where the game was called short by the Brookhaven coaches.

“The girls, they came out hot, we seemed to punch them in the nose early and we hit the ball well. To be honest just to sum it up, I just felt like we came ready, we came there to do a job and win and that’s what we did,” said Dickens.

Next, the Lady Maroon Tide will play the East Central Hornets. They’ll travel to Moss Point this Friday, April 29 for game one. First pitch will be at 5 p.m. Game two will be on the following Saturday in Picayune.

The Hornets are well coached; they have hustle players that work hard all game.

“The thing with East Central, they bring the same team every year, which is kind of crazy. To be honest they don’t have any pitching that is over powering, they have some good pitching, they’re just not going to be very powerful. They probably have a lot of movement on their ball and they always hit the ball well. They’re a very good hitting team, they’re real patient in the box and they don’t swing at a lot of junk. They’re just real disciplined in the box,” said Dickens.

“It’s going to be a tough series, but I do think if we let our bats carry over and we hit like we did against Brookhaven we’ll be able to get the win…as long as we continue our defense and I think we’re just going to out hit them. I think that’s what it’s going to come down to. The team that has the most hits will be the team to win the series,” said Dickens