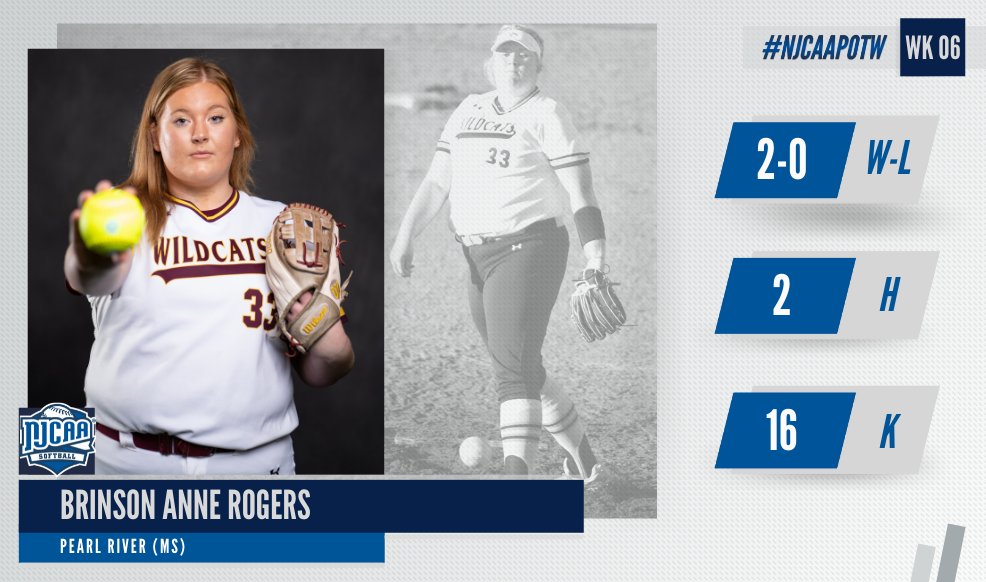 POPLARVILLE, Miss. — The accolades continue to roll in for No. 8 Pearl River softball’s Brinson Anne Rogers (Statesboro, Ga.). One day after being named the MACCC Pitcher of the Week, the right-hander has been named the National Junior College Athletic Association Pitcher of the Week.
Rogers is the first Pearl River athlete to be honored by the NJCAA in the spring semester.
The honor comes after yet another stellar week by the Louisiana-Lafayette transfer. She started the week by dominating rival and then No. 17 Gulf Coast by throwing a complete-game shutout, striking out 12 batters. She allowed just two hits in the contest. She also entered in relief in game two and recorded the last two outs of the game with one strikeout.
Rogers pitched the first two innings of a matchup with East Mississippi and tallied three strikeouts without allowing a hit or run.
Heading into Thursday’s matchup against No. 2 Copiah-Lincoln, Rogers has a 0.99 ERA across 84 2/3 innings pitched. She has also struck out 166 batters and allowed just 31 hits.
NEXT UP
PRCC returns to the field Thursday in a crucial matchup with No. 2 Copiah-Lincoln. The doubleheader is set to begin at 3 p.m.
TICKETS
Single-game tickets are on sale now and can be purchased at PRCCAthletics.com/tickets.
TUNE IN
All home Pearl River softball games are livestreamed for free at PRCCMedia.com. Fans who have Roku, Amazon Fire or Apple TV devices can also watch the Wildcat broadcasts by downloading the “Pearl River CC” channel from their app stores.
For the latest on Pearl River Community College athletics, follow us on Twitter (@PRCCAthletics) and Facebook (PRCCAthletics).