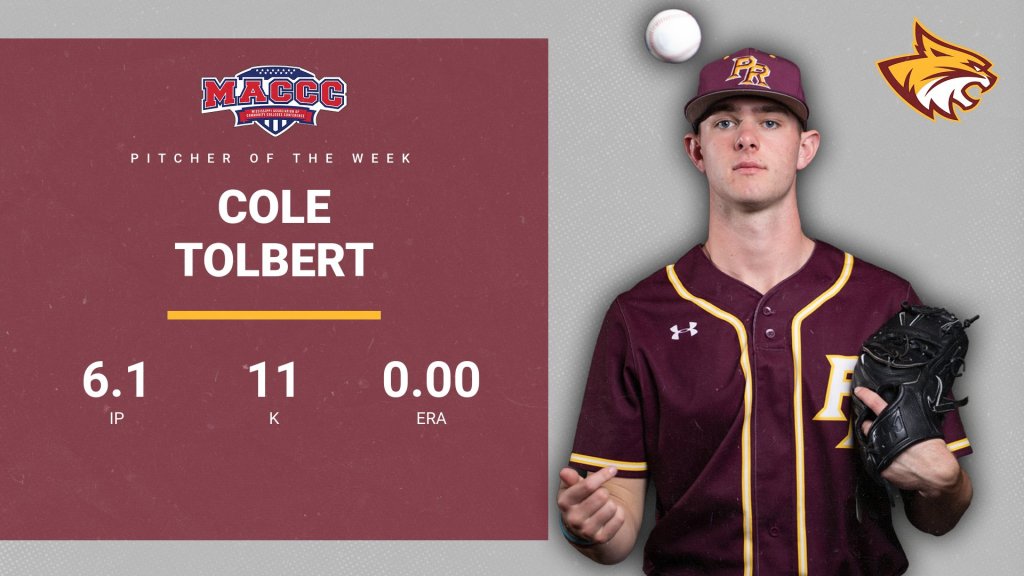 POPLARVILLE, Miss. — No. 3 Pearl River baseball’s Cole Tolbert (Laurel; West Jones) has been named the Mississippi Association of Community Colleges Conference Pitcher of the Week after a dominant week on the mound for the Wildcats.
Tolbert made his first appearance of the week in a matchup against rival Gulf Coast. The right-hander tossed two innings shutout innings, striking out four batters against one hit.
In PRCC’s doubleheader against East Mississippi, pitched in a different role than he has all season as he was given the ball to start the game. He threw 4 1/3 innings of two-hit baseball while striking out seven batters.
He allowed just one unearned run, two hits and two walks in the outing.
Tolbert has been incredible for the Wildcats this season. So far, he has a 1.71 ERA in 21 innings pitched.
His 31 strikeouts place him in a tie for second on the team.
Tolbert is the second Pearl River baseball player to be honored by the MACCC this season after Tate Parker took home the Player of the Week award one week ago.

UP NEXT
Pearl River hits the road Wednesday to take on Copiah-Lincoln. The doubleheader is set to begin at 3 p.m. and can be viewed at CoLinAthletics.com/watch. The game can also be heard at WRJWRadio.com.
For the latest on Pearl River Community College athletics, follow us on Twitter (@PRCCAthletics) and Facebook (PRCCAthletics).